Have you ever wondered what happens when you die? 8Doors: Arum’s Afterlife Adventure will answer that very question as you explore through the afterlife according to Korean mythology. The story begins with Arum’s dad dying in a peculiar way that makes her question the reason for his death. Protagonist Arum dives into the depths of the afterlife in search of her father’s spirit. You will search through various parts of the afterlife, or Purgatory to be exact, to figure out what has happened with your missing father. On the way, you get to see the whole process of how souls are judged and categorized, i in addition to meeting some interesting beings along the way.

8Doors will seem very familiar to fans of Hollow Knight, and it follows a lot of the same structure in which you have to find someone to buy a map from in each area instead of the map filling in itself as you go. Instead of earning experience points, you purchase your upgrades with in-game currency gained from defeating specters. 8Doors is very much a Metroidvania; you explore eight connected realms, picking up various tools and skills in each to get you to the next part. You have what is called a “face plate” which gets filled in with different abilities that you unlock from each defeated boss. You can also unlock other upgrade points by finding hidden shrines in the game or from reaping a certain number of lost souls spread out through the realms. You can use these points to buy perks, which are other lesser buffs like higher damage or defense.

The presentation of the game is great. All of the characters look hand drawn and have a very fluid animation. The music is very fitting and moody for each situation and area. The art style for each realm is different enough so that each one has its own unique feel and design. What’s really captivating is that the afterlife isn’t portrayed in the way you would think; there is no fire and brimstone or endless clouds as far as the eye can see. This afterlife is more like the real world. Here, you have to get a number at the counter and wait to see what your future may hold. It’s reminiscent of businesses in the real world where you might lose a soul because they weren’t properly filed or their name was misspelled. This adds extra personality and enjoyment to the system of how the afterlife is run and how Arum’s Father went missing in the first place. The story stays gripping enough that you will want to try your hardest to get to the end to see who has been corrupting the afterlife and messing up the filing system.

Throughout the adventure, the enemies that Arum runs into will remind her, “Death is inevitable.” This couldn’t be any closer to the truth. 8Doors is incredibly hard, and the difficulty spikes as early as the first boss. Challenging games can be fun and rewarding when you take the time to learn the attack patterns of each boss character, but the problem here is that a lot of the challenge comes from unfair game mechanics more than the bosses themselves. The further you get into the game, the farther apart the checkpoints are from the challenging areas or bosses. It can get really irritating when you have to navigate multiple environmental hazards on the way to a boss that you are expected to play over and over again. This can get very tedious, very quickly, and you really have to have a lot of patience to persevere. There is an easy mode called “story mode,” but I could see people getting just as stuck on that as well if the checkpoints are as sparse as they are in the normal mode. 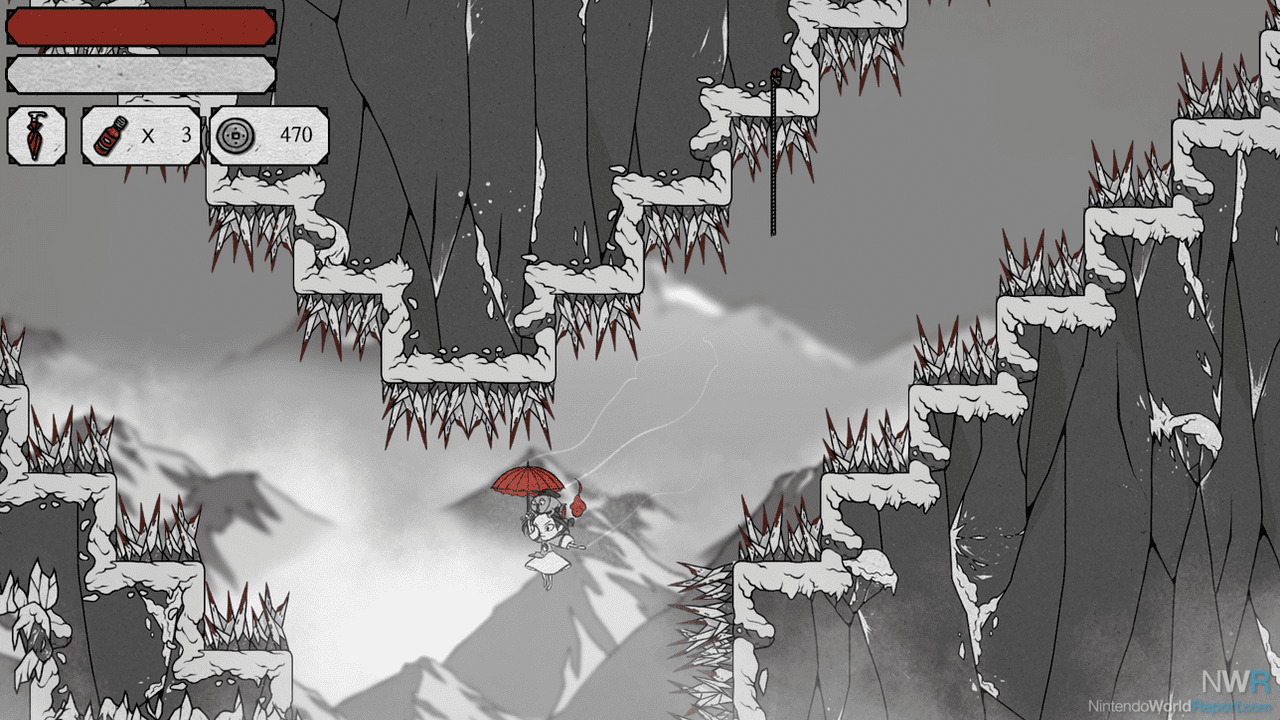 Thankfully, there are some warping areas; the problem is they only exist in one spot in each of the areas, making it very difficult to move through them quickly, so backtracking continues to be more of a chore than a fun exploration. It really would have benefitted the game if you were able to earn a way to at least teleport between the save stations that you had discovered. I found myself in some areas saving by a teleport and then teleporting to the area where the boss was because the save point was so far away in that particular realm and the hazards you had to go through weren’t worth repeating. That is where the big problem is. Instead of being able to go and find an area to grind in when you get stuck on a boss, you’re trapped wherever a given checkpoint is, which basically halts your progress in the game. Going all the way back to find the warp area is too treacherous, so you just have to throw yourself at the boss and the hazards along the way over and over again until you emerge triumphant or get bored and quit. This issue can result in multiple hours spent on one boss that could be taken out more easily if you had better access to the upgrade area.

8Doors doesn’t really stick the landing at the end, either. Most of the weapons are animated well and move in the way you expect except for the last one you get, which is a traditional fan. You use the fan to create wind that damages enemies. The animation for this is so stilted that it really feels like it was tacked on without the care that the other weapons received. There are also so many puzzles involved around the fan that become all the more frustrating because of the way its integration was handled. For example, you use the fan to make another fan move, which creates a platform around a spikey area so you can progress. So you have to jump, activate the fans, wall jump, dodge, and double jump; doing all of these together just doesn’t feel as fluid as it could be. On top of all this, there are parts in the game where the platforming can get very frustrating. For instance, in the latter half of the game there are a lot of sections where there are jumps where you have to reach the full extent of your jump each time to progress. There isn’t much margin for error, so it’s easy to mess up. This can become incredibly frustrating when you have to get across a large area with no save points, and this level design comes up a lot especially toward the end. 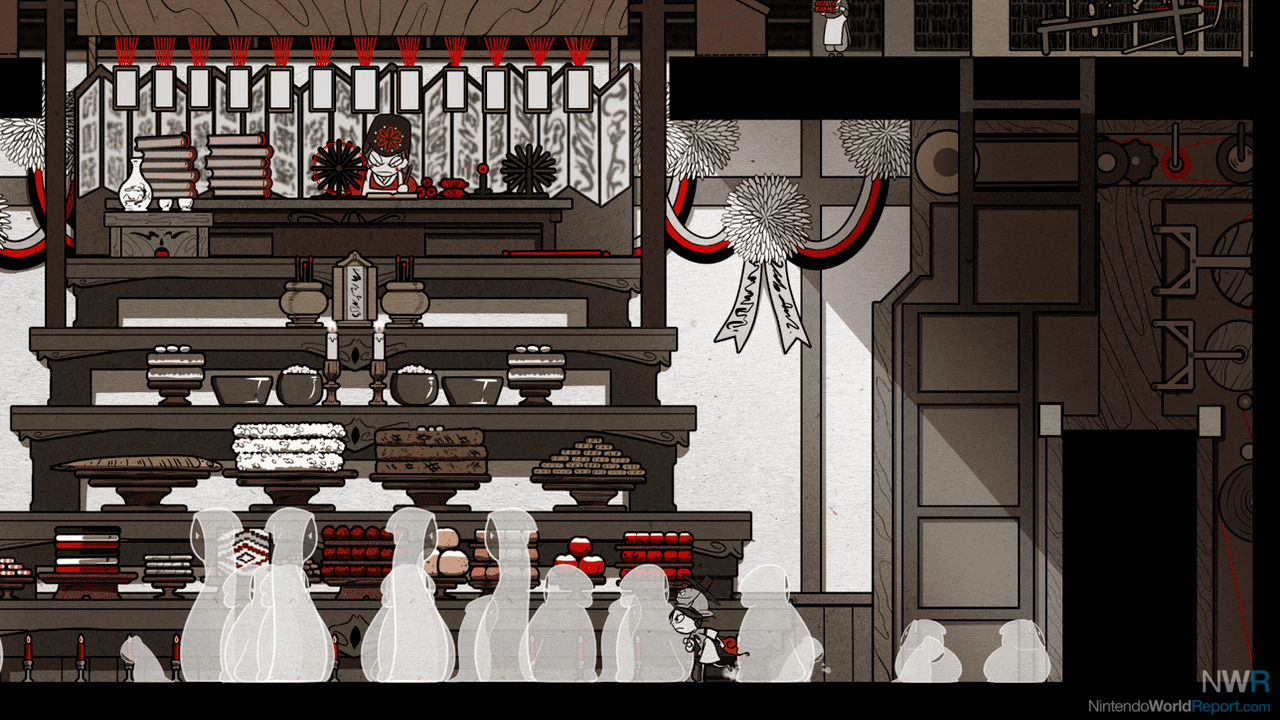 8Doors takes about 15 hours straight through, depending on how long you get stuck on each of the bosses. If you like the challenge of the game, there are plenty of additional bosses to find and beat in order to get the “true ending.” There are definitely some spots towards the end that feel like they were just thrown in to add some extra padding, like repeating quests you’ve already completed and even having to replay a boss fight. It can really take you out of the moment and halt the flow of the game. With the long distance between save points, difficult bosses, and sometimes frustrating platforming, this game will really make you ponder how much suffering you are willing to endure to reach full enlightenment.