Listen here, brother, this is AAW! A fast-paced, arcade wrestling game that will fill any modern or vintage wrestling fan with heaps of nostalgia! Developed by VICO Game Studio and published by Reverb Communications, Action Arcade Wrestling is precisely what it says on the tin – it’s full of action, it’s most definitely an arcade game, and you wrestle.

Within AAW, you have around 30 wrestlers at your disposal. None of these are based on real wrestlers, and not all of them are even from Earth – as again, this isn’t a wrestling simulator; it’s an arcade title. Due to this, some of the characters are wacky, and some of the moves are even more so. For example, certain wrestlers can shoot lasers from their eyes. Now that to me seems a little unrealistic, as, after all, wrestling is real, right?

As you begin AAW for the first time, you are prompted to embark on the tutorial. I advise you to do this, as the button layout is… interesting. They opt for a two-button system, meaning the L and R buttons have zero use in-game as well as your X and A buttons. This at first feels unnatural and awkward, but the tutorial is excellent in getting you accustomed to this control style and is easy to use and learn, making it highly accessible to all gamers.

AAW offers up one game mode, Exhibition Mode. Within this mode, you have a wide array of match types ranging from the classic 1-on-1, to elimination tag matches up to 5-on-5, and even Royal Rumble style matches. Unfortunately, there are no special match types such as ladder matches, cage matches, and the like. It is very disappointing that the only mode available to you is this one. It would have been nice to have had a story or career mode, where you can take one of the wrestlers on the roster or your own created wrestler from a nobody to world champion.

Despite the lack of game modes, there is a ton of depth elsewhere in the game – and that is the creation suite. This is where Action Arcade Wrestling shines. The sheer level of customisation is unreal. Do you want your wrestler to look like an alien? How about a robot? How about a hamburger? You can do it! But (and this is a big but) you cannot do this on your Nintendo Switch. You must download a companion app via Steam to create your wrestlers, which you can then save and download in-game. To add to the annoyance of this, if you are a Mac user, like me, you cannot access this companion app – as it is exclusive to Windows. I have, however, seen the ridiculously unique creations that the AAW community have made in the creation download centre in-game. Some of these are truly astounding, and with a daily download limit of 120, you can download all your favourite wrestlers because they’ve all pretty much been made by the community. 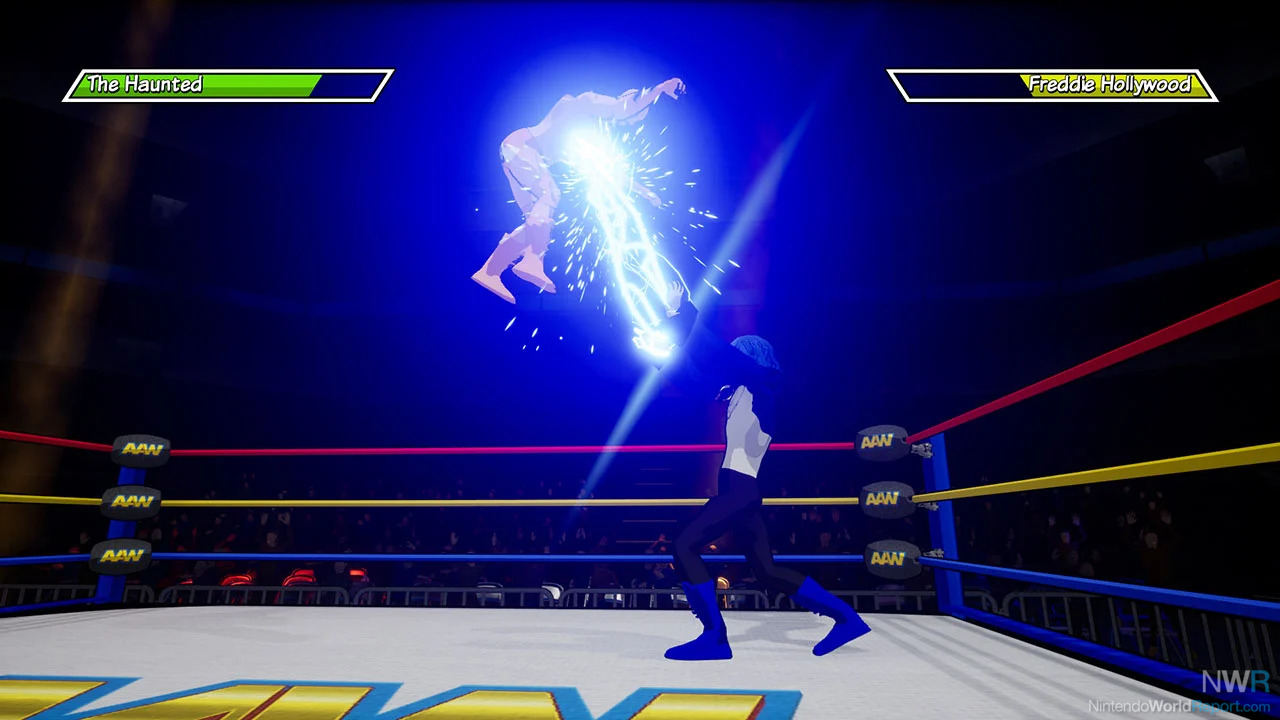 For many of us, we look back on the world of wrestling with heaps of nostalgia. Especially during the glamorous 80s and early 90s and the dawn of the Attitude Era – this game will scratch that nostalgic wrestling itch with its retro style cell-shaded, colourful graphics. These graphics are nothing to write about, but they don’t need to be amazing, given the arcade nature.

Action Arcade Wrestling is a fun pick-up-and-play arcade wrestling game to play with a friend. It won’t hold your attention for too long. Still, with the massive pool of customizability and readily available downloads from the AAW community, there is enough here to wet a wrestling fans’ appetite. If only it had the same depth with its available modes, it would have gone from a good game to a great one.