Biomotor Unitron is one in a line of many NEOGEO POCKET COLOR titles to find a new home on Switch. It’s great to see games lost to time make their way to the primary portable console on the market, but that’s not to say that we’re striking gold with every new experience unearthed. Enter Biomotor Unitron, a barebones RPG about outfitting a robot and climbing the tournament ranks to become master of your domain. Absent any real story, the game fumbles with repetitive dungeons, rote combat, and a blisteringly high encounter rate. Whatever metal parts were thrown together to create this game, it ended up more Frankenstein’s monster than Michaelangelo’s David.

After starting a new game, you choose between a male or female protagonist, with the other becoming your partner, who is stationed in your workshop to help with developing new parts or outfitting your machine. The titular unitron is what you take into battle, and it actually changes appearance and color based on its elemental affinity and equipment. The menu-based exploration in town takes you to one of four areas, each with one or more characters to interact with, but most provide little in the way of info or meaningful dialogue.

The basic gameplay loop of grinding out levels and money to upgrade your unitron and then compete in the next tournament provides some entertainment, but the feeling is fleeting. The four dungeons outside the main town are boring, cumbersome to explore, and maze-like in their construction. Exploration is made all the more tedious by an encounter rate that would put the first two Breath of Fire games to shame. About one in four treasure chests you open ends up being empty, while most others award only money that you can spend in the shop to buy new parts, materials for crafting, or combat items like FixIt potions. The enemy designs aren’t all that attractive either, and because you have to start every dungeon on the first floor (out of seven), trudging through the early floors as you get stronger is far too much of a chore.

Battles themselves play out as standard turn-based affairs, much like in the Pokémon games. Elemental types like Fire and Water have strengths and weaknesses, but there’s no indication in combat if you’ve hit an enemy’s strong or weak point. This is less of an issue in the four dungeons since each of them centers on a single element; bring a fire type attack to the wood-themed dungeon and you’re golden. The lack of transparency is more of a problem in the tournaments where you battle other unitrons. It’s not explained anywhere, but the color of a unitron does denote its elemental affinity. Still, adding some text during combat to indicate the effectiveness of attacks would have been incredibly welcome. Another issue is that you basically have only two attacks (you can earn two extra ones eventually), one for each arm, which makes some of the later game fights and the final dungeon particularly frustrating. 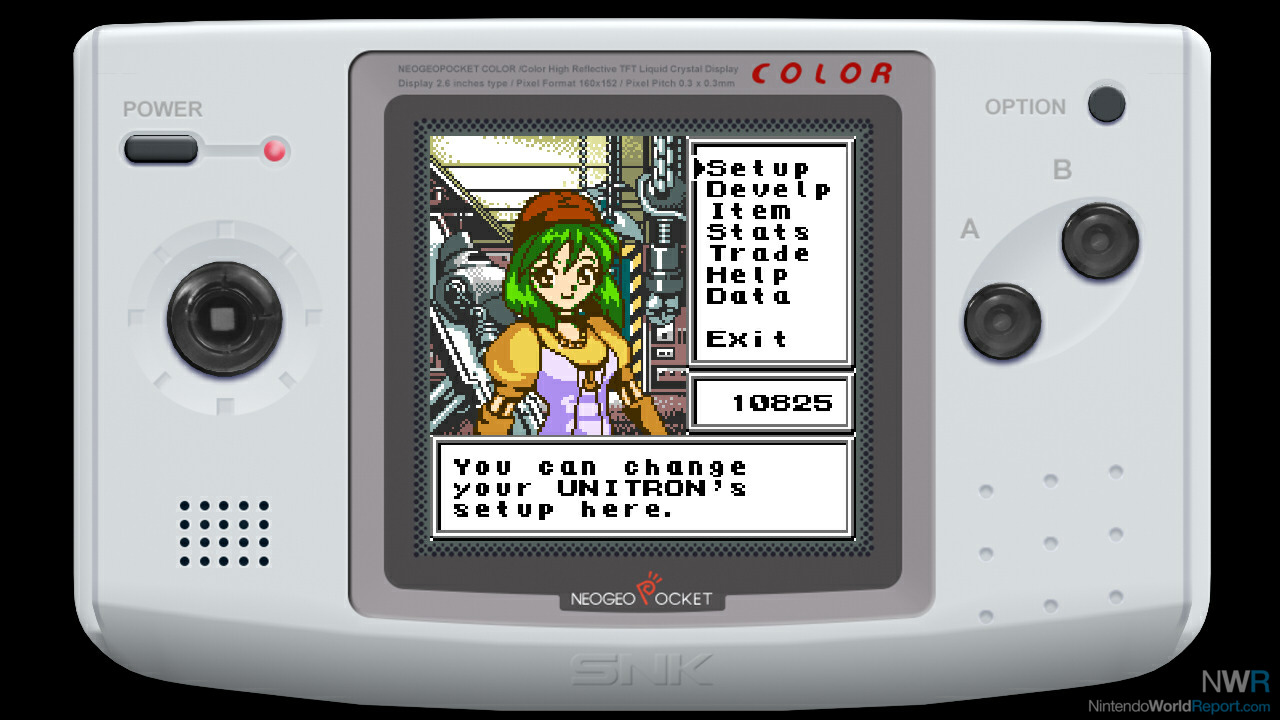 On the plus side, the way that you purchase basic weapons and upgrade them at the workshop is kind of neat. After choosing a specific armament, like a bow, a cannon, or a rapier, you can then ask your partner to help you craft an upgrade by adding a material like steel, gold, or platinum and then boosting your chances of success with a Tool item. That said, without the rewind feature, failure is immensely punishing in that you lose the material and tool if the process doesn’t yield a new weapon. Late-game materials can be exceedingly rare or expensive, which makes the random chance attached to crafting a needlessly punitive feature.

Unless you’re trying to play or collect all of the NEOGEO releases coming to Switch, it’s hard for me to recommend Biomotor Unitron. Games that came before it, like Quintet’s Robotrek, have taken a similar premise and created a much more well rounded experience. Biomotor is simply mired in repetitive gameplay that just isn’t paid off by any enjoyable story or character moments. While it isn’t broken or unplayable, it’s mediocre and frustrating in equal measure. Best to steer clear from these outdated robot wars or at least wait for a steep discount.