The Metroidvania genre has seen a lot of entries on Switch recently, including great games like Axiom Verge 2 and Nintendo’s own Metroid Dread. Those games set the bar very high for a style of game that was already very difficult to pull off in a satisfying way. Blast Brigade vs. The Evil Legion of Dr. Cread had a lot to live up to, and while it hits some impressive highs, its flaws prevent it from reaching the level of those games.

Featuring a story straight out of an ‘80s action movie, Blast Brigade starts with you controlling a secret agent infiltrating an island lair of an evil scientist. Along the way you meat other characters, with a story conceit allowing you to switch between them at any time. Each character has their own special abilities that give you new ways to navigate the environment, but apart from the story reasons, having to switch back and forth only gets in the way of traversal, even though it’s rarely necessary to switch in quick succession.

Compared to many other Metroidvania style games, Blast Brigade has a heavy focus on action and combat. Each section of the game is littered with enemies, and each one can be very dangerous if you’re not careful. Just surviving from checkpoint to checkpoint can be a challenge, particularly when you’re unexpectedly thrown into a seemingly unnecessary kill room.

While Blast Brigade features an open world, the main storyline plays out in a very linear fashion. There are collectibles to go back for, and luckily there is a fast travel system which helps facilitate that, but the world feels less organic because of the way it’s laid out. Given the action focus and difficulty, the collectibles are definitely worth going back for, though, as they can expand your health meter and allow you to expand your base, giving you more powerful weapons. 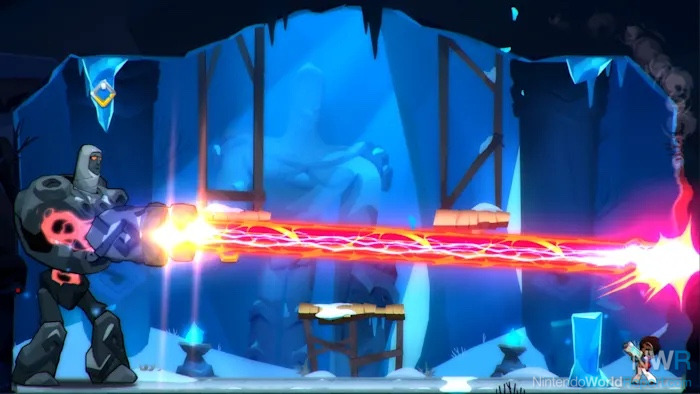 By far the best part of Blast Brigade, however, are its boss battles. Unlike the standard combat, which sometimes feels like a slog, the bosses feature creative designs with intricate patterns that provide unique challenges. While the boss fights are even more challenging than the rest of an already difficult game, they feel less frustrating because of their creativity.

Despite its problems, Blast Brigade is fun if you don’t mind beating your head against the wall at times. While its linear nature doesn’t always do a good job of scratching the Metroidvania itch, what’s there is a solid action game with fantastic boss battles.