Chrono Cross had an unenviable task back on PlayStation 1 in the year 2000 in North America. It was a follow-up to Chrono Trigger, a beloved Super Nintendo RPG, launching at the peak of post-Final Fantasy VII Japanese RPG hype. When it came out, Chrono Cross received a ton of acclaim but was also met with its fair share of backlash for being so different from what came before it. There’s no getting around it: Chrono Cross is a wild and weird game, but that adds to its unique, expansive, and enchanting qualities. It was an incredible game back in 2000, and it’s still an incredible RPG in 2022, especially with the added boosts and benefits of the Radical Dreamers Edition on Nintendo Switch.

First and foremost, the main game is faithful to a fault compared to the original. The only changes are a new visual filter that does a good job of making the game look nice on modern televisions but doesn’t do anything to truly update the visuals from the PS1 days. It lands in that spot of looking like I remember the game, not what it actually was. This is, for better or worse, the PlayStation 1 game from two decades ago. In addition to the new visuals, you can also switch it to the original visuals, which are grainier but still charming. Oddly, you can only do this at the launcher for the game and not when you’re in the middle of playing. Load times are virtually negligible, which is a huge improvement over the disc-based release.

The modern gameplay enhancements are all toggled by shoulder buttons or analog stick clicks, consisting of a slow down and fast forward (which were actually accessible via New Game Plus in the original) as well as an option to turn off enemy encounters and a boost to make battles easier. The battle boost is interesting because it’s less of an instant win and more of a “can’t lose” situation. Most enemy attacks miss, your characters don’t take any damage, and you have the ability to use elemental attacks without physically attacking first. You still can only use elemental attacks once per battle, which means strategy is still the best way to go, or else you’ll be grinding out battles slowly.

Outside of the gameplay, there is remastered music, which is very nice even if the original soundtrack is one of the best gaming soundtracks ever and doesn’t really need any tweaks. The musical soundscape of Chrono Cross is one of the greatest and most memorable in video games, standing toe-to-toe with its incredible predecessor’s soundtrack. 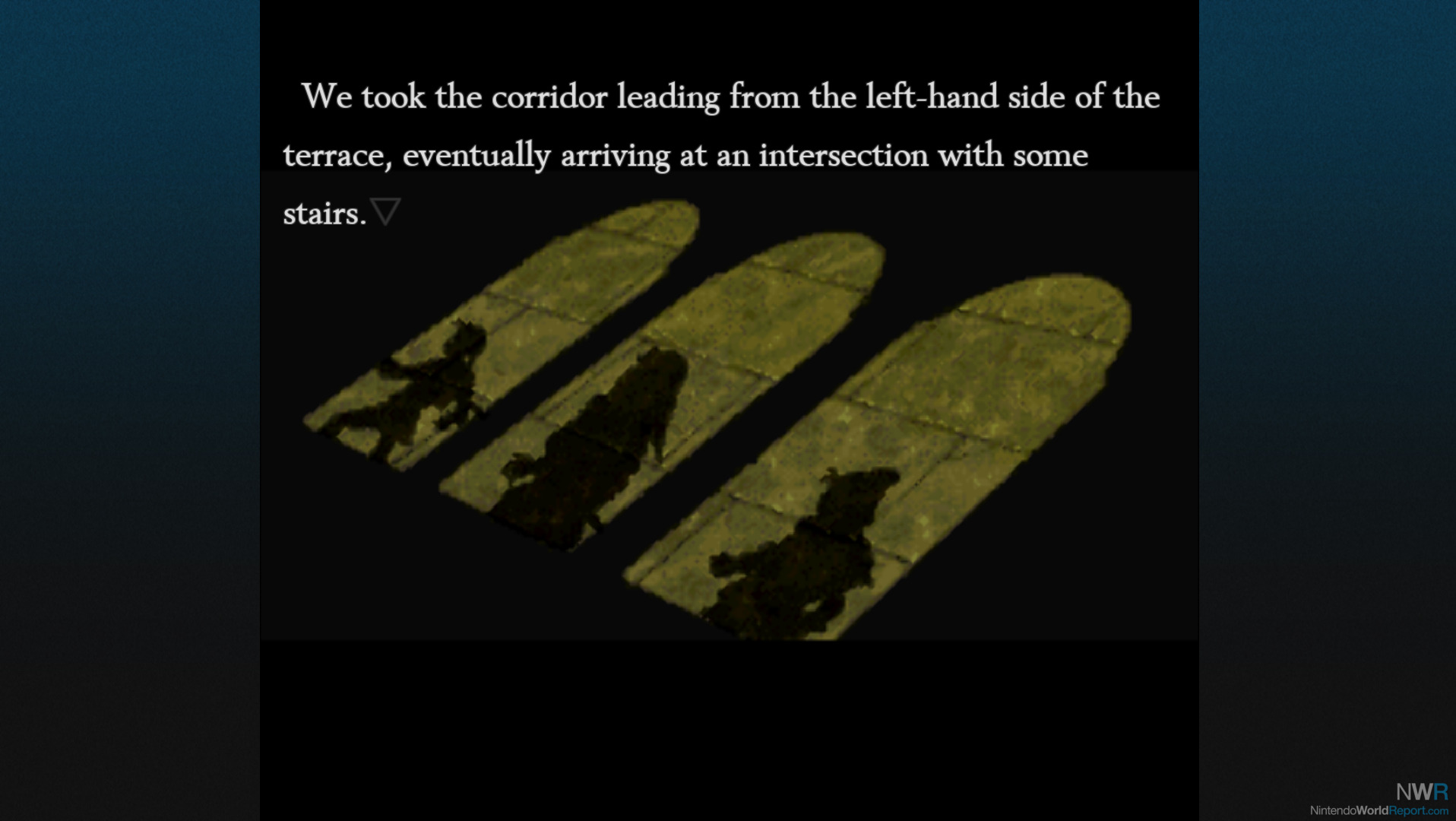 Speaking of predecessors, while to most, Chrono Trigger is Cross’ direct predecessor, in Japan, there was a game that came out in between the two that is related. The 1996 Super Famicom Satellaview exclusive Radical Dreamers is available in English for the first time in this release. This visual novel is not directly canonical with Chrono Cross, but it offers a different interpretation of the story. The main scenario sees Serge – the protagonist in both Cross and Radical Dreamers – into Viper Manor alongside Kid – a thief extremely similar to the Kid in Chrono Cross – and Magil, who has a mysterious origin (and no direct link to Cross, sort of). Much like the Viper Manor segment in Chrono Cross, you’re storming the building to fight the villainous Lynx, but the end of this story is different in interesting ways. After going through the main scenario, you unlock various side stories that range from poignant to comical. All in all, Radical Dreamers is an okay visual novel that is most fascinating as the previously unseen connective tissue between Trigger and Cross. It certainly shows its age, but the writing is still strong.

Going back to the main event, the battle system in Chrono Cross holds up extremely well with its eclectic and novel lack of true leveling up. As you progress, your characters build up their stats in battle, plateauing at a certain point until you reach a point in the story where you go up a star rank and can raise stats further. Grinding in this game is more focused on figuring out how to best use your vast selection of characters in the right way in boss battles, which ties into the element system. By doing regular attacks, you build up an elemental meter that allows you to cast elemental attacks that are organized in an increasing tiered list. The higher the tier, the more powerful the attack. You can only use elements once per battle outside of a few consumable ones. Executing a sound strategy involves attacking enemy weaknesses and trying to turn the battlefield into one elemental color, which provides a benefit for those elements when used. For example, using red elemental abilities will turn the field red after three are used in a row. Those red abilities are strong against blue elemental characters and will do even more damage when used while the battlefield is all red. 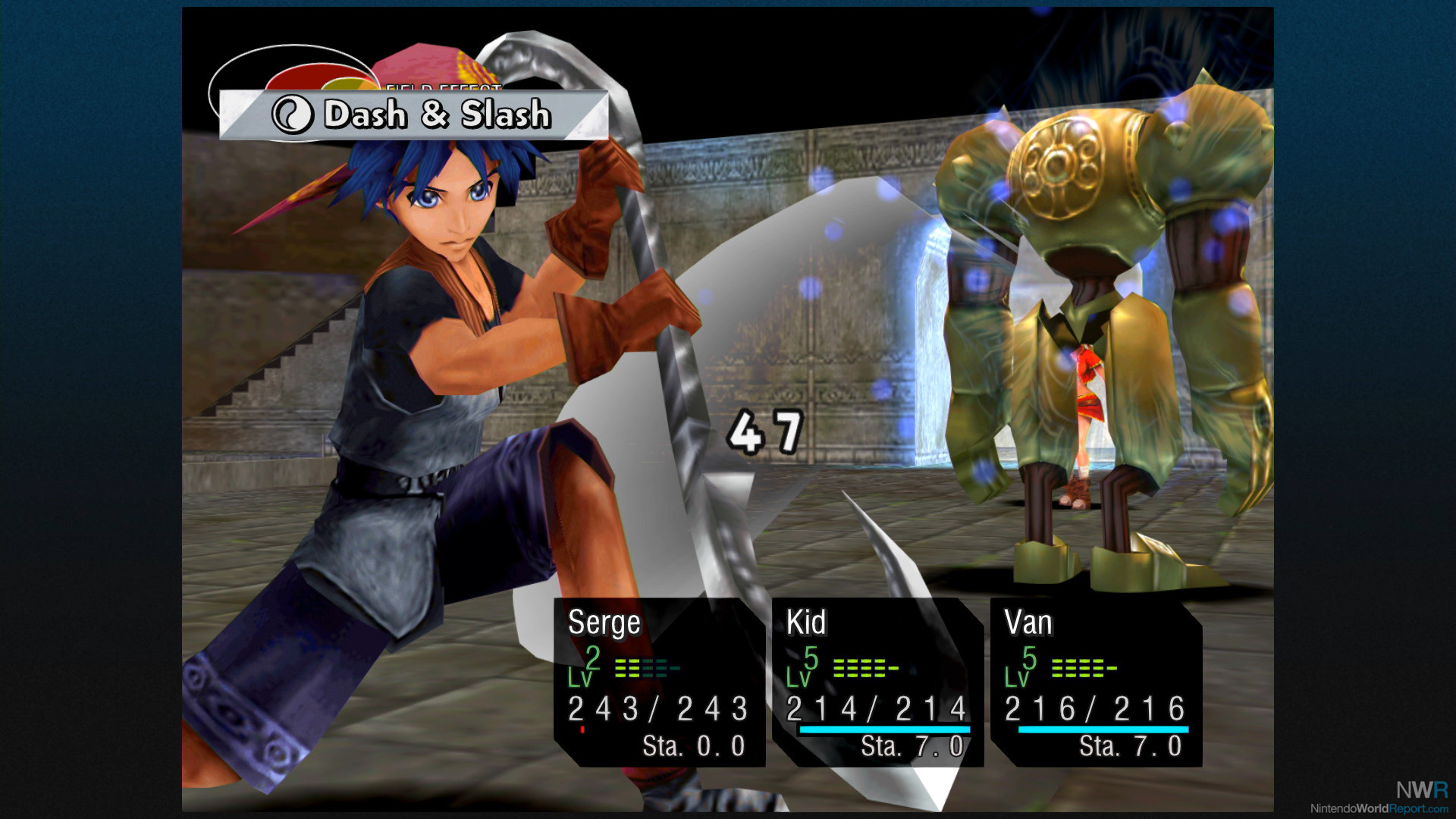 The battle system is made richer by the sheer amount of elements you can find and buy, as well as the dizzying amount of characters. In total, there are 45 characters that can join your party in Chrono Cross. Not all can be acquired in a single run, but it’s just an incredible batch of personalities. You have your erstwhile protagonist Serge and his hometown girlfriend’s fluffy pink dog Poshul. There’s an alien that looks like Olimar from Pikmin. A harlequin who speaks with an asinine French accent. A cyborg. A rockstar. A guy named Glenn who heavily references Frog from Chrono Trigger. A luchador. The list goes on and on. It is borderline way too much, but the varied cast fits together nicely, especially because sometimes it’s a puzzle to just figure out who you can recruit and when. A lot of the characters also have unique back stories that might be referenced when they’re not in your party, but usually go way deeper if they’re there.

Discussing the overarching story is hard to do without going into spoiler territory (I know this is a 22-year-old game but it’s the first time it’s on a Nintendo system), but the hero Serge’s adventure starts off with a good mystery and keeps up a good pace of climatic events and revelatory twists over the course of its 50+ hour playtime. In lieu of Chrono Trigger’s time-traveling adventures, Cross deals with dimensional-hopping action where you bounce between two worlds that have a lot of the same landmarks and characters but are vastly different in key ways. This is a weird sequel because it’s not totally a sequel, even if it does follow up on some parts of Trigger. The references slowly unravel as you work your way through and the payoff, at least for me, is wonderful.

I went into this review with a little bit of trepidation. I adored Chrono Cross the previous times I’ve played it, but it’s been a good decade or so since I last did so. I was just as riveted playing the game on Switch now as I was years ago, enjoying building a different party and exploring the world in a different way. The speed-up and toggles for enemy encounters and battle boosts were welcome in this playthrough, mostly because I could toy with elements and characters more than I did in the past. While Radical Dreamers isn’t much more than an alternate history curiosity, the fact it is actually localized and legitimately available outside of Nintendo’s long inactive downloadable Satellaview network is incredible. Chrono Cross is a wonderful game – hands down my favorite PlayStation RPG – and the Radical Dreamers Edition is the best and friendliest way to play it.