I lay motionless, staring into a black abyss. Waves of pure light attempt to break through shuttering folds and lensed focals. Messages begin outputting to resume operational functions. I wake up and play more Citizen Sleeper.

From developer Jump Over the Age and publisher Fellow Traveller, Citizen Sleeper is a game that invades your thoughts and transports you into its cyberpunk capitalist dystopia: the world of The Eye, a country-sized space station of outer space misfits, refugees, criminals and corporations. It’s a beautiful and haunting setting that begs to be explored.

As a Sleeper, you have cast your body aside to assume a new life and career based on your mechanical enhancements. Your mind is transported into an artificial body while the one you left behind is being kept on ice by the corpos who provided you with your metal mental prison. As a now runaway from your overlords it’s up to you to find a way to first survive and possibly thrive in this new world you find yourself in.

This is where your journey starts in this new tabletop roleplaying game for the switch. You have a choice of three Sleeper classes each with their own interesting starting perks. Extractor specialises in survivability and endurance tasks. Machinist is the engineering class. And the Operator is adept at hacking the many interfaces along the Eye.

While each class seems quite unique on the surface, don’t dwell too much on your choice as after some time and upgrades, most character classes will play the same. Though one could argue that could be considered a negative, the starting hours of the game are the most tense as you struggle to survive with each passing cycle and your class will heavily dictate how you approach the early challenges. And survival is the name of the game. As a runaway Sleeper, you no longer have access to the medicine needed to keep your artificial body alive. With each passing cycle you come closer and closer to being just another pile of scrap on The Eye. To stave off the cybernetic grim reaper, you have a couple meters to maintain in order to keep yourself operational.

The Condition meter dictates your overall health, with more health equating to more dice rolls per cycle. Energy is restored through consumption of foods and needs to be maintained or else your Condition will drop swiftly at the end of each cycle. Keeping both meters as full as possible means you’ll have more dice to roll. 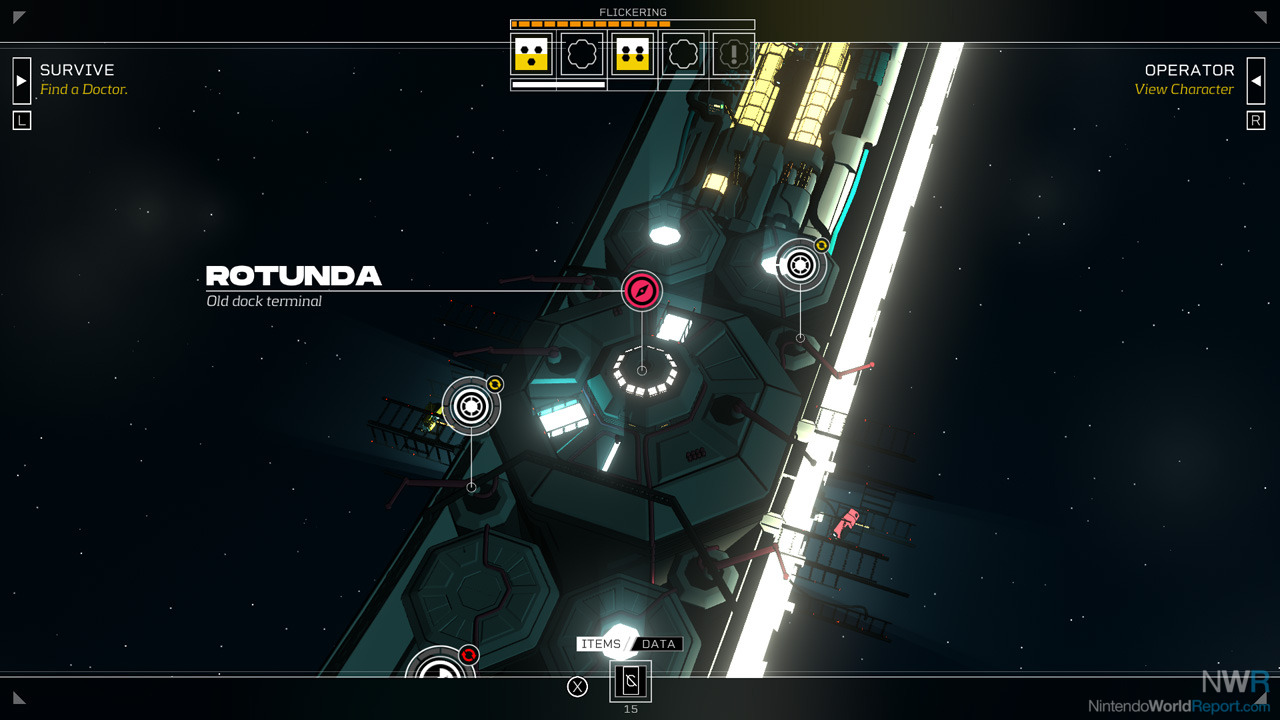 Each cycle you will have to decide how to use your rolled die wisely. Choosing actions that compliment your class, such as working the scrap yard or helping a friend build a brewery, will be easier than others due to +1 or -1 modifiers on your chosen class’ traits. Selecting one of your rolled dice and consuming them to carry out the action. Completing an action successfully is not always guaranteed. Your submitted die value will dictate the likelihood of success and all actions carry a danger level associated with them. Shown as; Safe, Risky or Danger beside the selectable task. Failure can result in direct afflictions to your Sleeper such as losing condition points, credits, and more. Once you’ve expelled your dice rolls, you will need to return to your home to end the cycle.

There’s actions that can only be taken once and are occasionally time sensitive, like a story action, others that are repeatable, such as working as a delivery boy to earn some credits. Some actions also contain a progression system. Repeat an action enough times and a circular meter will fill. These can result in events such as meeting new characters, revealing points of interest, or completing a quest line which can net you Drive points. Drive points are used to upgrade your character. You’ll also come across actions that require patience and cycles to pass before you can interact with them. They could be positive, like a freighter coming in with new scraps for you to purchase, or possibly something more sinister on the horizon begging for your intervention. These timed events pulling your focus from progressing other actions make the world of Citizen Sleeper feel alive as if something is always lurking beneath the surface. Emphasising your struggle to survive with each passing cycle.

What keeps that sense of immersion ever present is the games’ artistic direction, which is tent-poled by the fantastic character art of Guillaume Singelin. Every character you see tells a story of their past at a glance. Some individuals are portrayed with deteriorating tech and modifications while others gleam with cutting edge machinery and fashion. Supported by a sleek interface and musical score to send you into orbit, Citizen Sleeper becomes something stunning to behold. 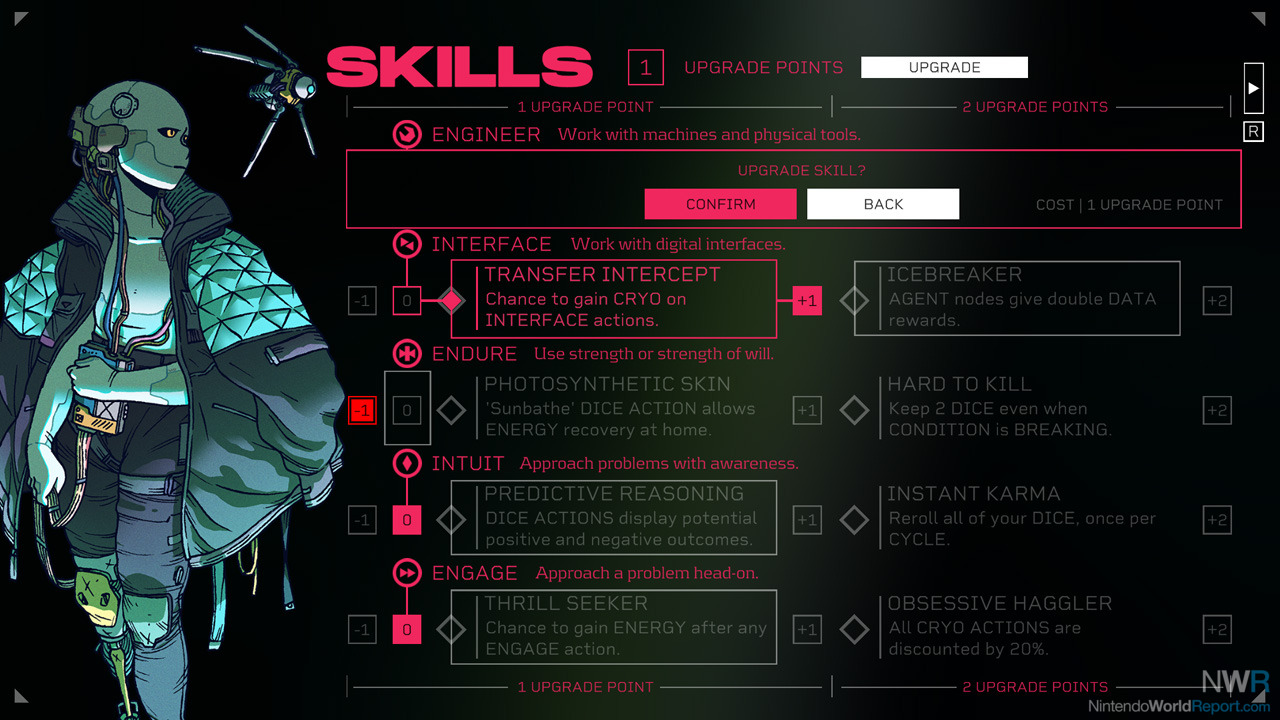 However, not everything gleams with Citizen Sleeper as the Switch seems to mirror some of the patchwork machines present on The Eye when running the game. Moving throughout its world will result in frame drops, and I had one instance where the HUD had glitched and disappeared, resulting in the game being unplayable. Thankfully the autosave system caught my exact progress and a simple reboot solved the issue. As well, initial load times are bafflingly long for a game so straightforward with its board-game style gameplay. Other frustrations come from the controls as a gamepad is simply not suited for how Citizen Sleeper operates. You’ll be fumbling to place your cursor on the correct interactable node far more often than you’d like.

While the gameplay is immensely enjoyable, it still does feel as though there’s plenty of room to grow in a sequel. I would love for more variable outcomes within dialogue choices and text-based combat based on character skills would have been especially welcome. An increased difficulty in a new game+ mode is something I was hoping to see, too, but didn’t. While that may seem like nitpicking, I truly feel like Jump Over the Age is on the threshold of something special with Citizen Sleeper, and if we ever get a sequel it will be at the top of my most anticipated games.

Citizen Sleeper allows for multiple playthroughs, and even when looking through screenshots during my review there are characters and locations I never once encountered within my first playthrough. Because of the heavy story-driven nature of Citizen Sleeper, your enjoyment will be contingent on your appreciation of the sci-fi genre as well as how much brain space is occupied by thoughts of Turing Tests. While that itself will denote that Citizen Sleeper isn’t for everyone, for those that have even a slight interest in the genre, you don’t want to sleep on this one.