Clearly modeled after Fire Emblem games of the Gameboy Advance and GameCube era, Dark Deity is a Strategy RPG that features many of the trimmings fans of the classic Intelligent Systems franchise will be very familiar with. A large cast of playable characters, varied classes with branching promotions, character conversations, and weapon advantages all make an appearance in Dark Deity. The nuances of these systems add up to set Dark Deity apart, at times even surpassing the ideas that inspired them. Unfortunately, a poor UI, uneven presentation and a general lack of polish get in the way of what is otherwise a fascinating new take on old ideas.

The story begins with Irving and his fellow military academy classmates Garrick, Maren, and Alden suddenly being recruited into the ongoing war between nations Delia and Aramor. As the story progresses, an even more sinister danger reveals itself pursuing the eternal aspects, items containing godly powers, to achieve a nefarious end. Our merry band of fresh recruits eventually desert the front lines of war to join forces with a cast of war veterans, adventure-seekers, assassins, and would-be enemies to combat this new threat. The plot is pretty standard fantasy-adventure fare. Where the story really shines is in the character writing.

The whole cast of characters are well defined without ever coming off as one-dimensional. The only issue is that as the party grows, so does the length of the story sections between battles to allow for several of the members to weigh in with their thoughts. It’s not a problem early on, but once you have a couple dozen characters competing for screen time, it can be a little much. On the other hand, bond conversations, chats between characters that can be read in base, are largely brief and contain some clever writing that outdoes most of modern Fire Emblem’s support conversations. 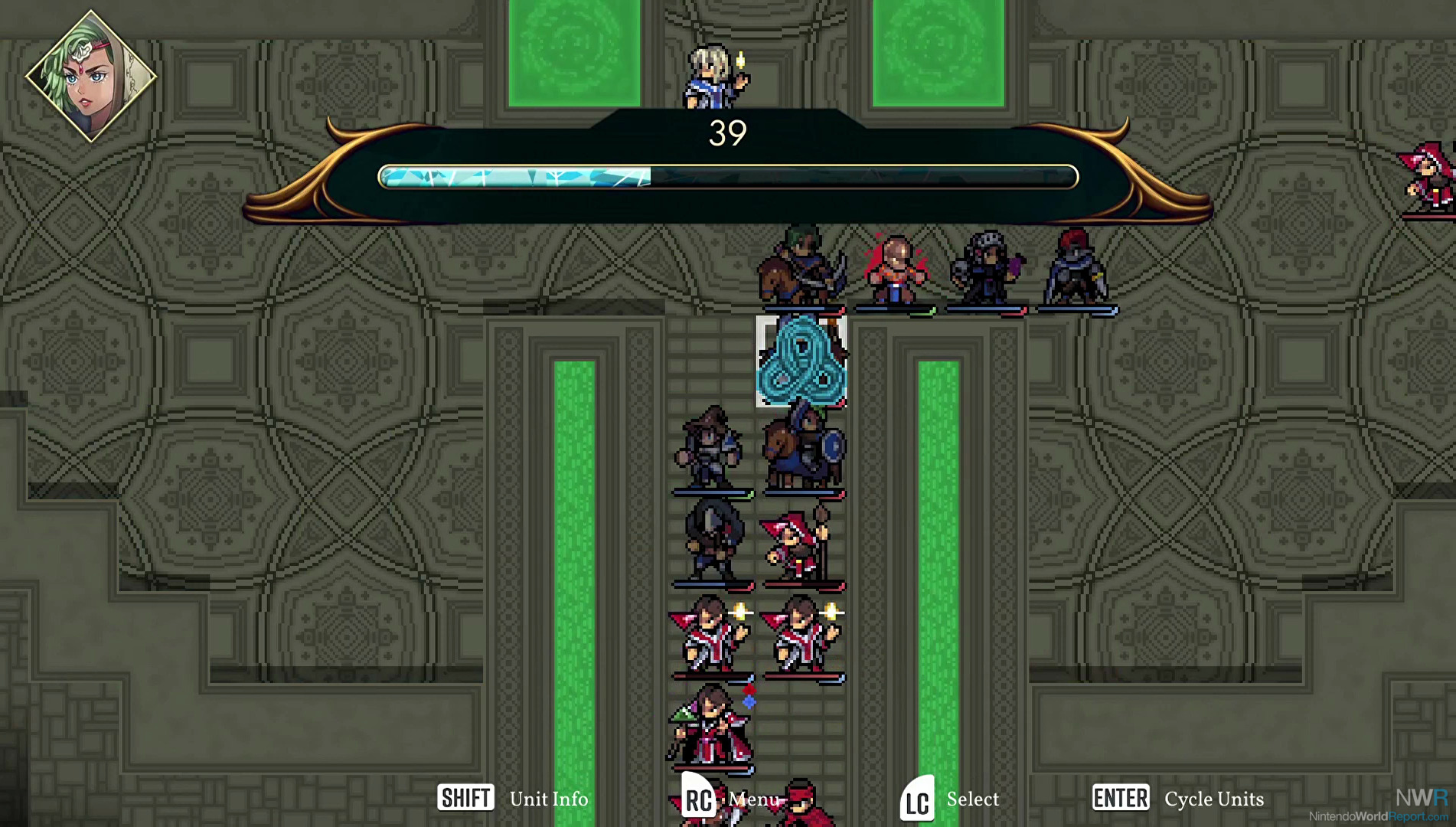 Battles follow the strategy RPG genre conventions of commanding a small army on a grid, defeating enemies, leveling up your units, and accomplishing a set objective. Objectives are varied from chapter to chapter and, for the most part, boil down to some flavor of rout enemies, defeat boss, defend for x number of turns, or arrive at a destination. Perhaps more important than objectives is the map design that houses them. In Dark Deity’s case, map design is hit-or-miss. Some maps are inventive with side objectives that encourage splitting up your party for greater efficiency, but too often maps are simply giant arenas for fights to take place, testing your patience rather than your skill.

Unit progression and customization is where Dark Deity diverts from Fire Emblem’s formula the most. Class options centralize around six base archetypes: warrior, ranger, cleric, mage, rogue, and adept. As units level up they can then be promoted to a choice of four tier-2 classes and eventually four tier-3 classes available within each class tree. These determine your growth stats and passive abilities, as well as armor and weapon types. Similarly, each unit has a set of four unbreakable weapons in which they can invest weapon tokens to upgrade, focusing on either maximizing power, crit, accuracy, or weight. And then there are the eternal aspects, unique items that can alter the capabilities of a unit, such as adding the ability to heal when dodging or increased damage when counterattacking. All these systems, the class selection, weapon upgrades, and eternal aspects add up to make character customization incredibly fine tuned and rewarding to play with. This is perhaps Dark Deity’s smartest mechanic: speccing each unit with their own particular set of class abilities and weapons to either shore up weaknesses or double down on strengths feels great. Personally, some of my favorite builds for units have been a self-healing dodge tank rogue, a mounted crit machine warrior, and a lightning fast ranger that deals increased damage when executing a follow-up attack. 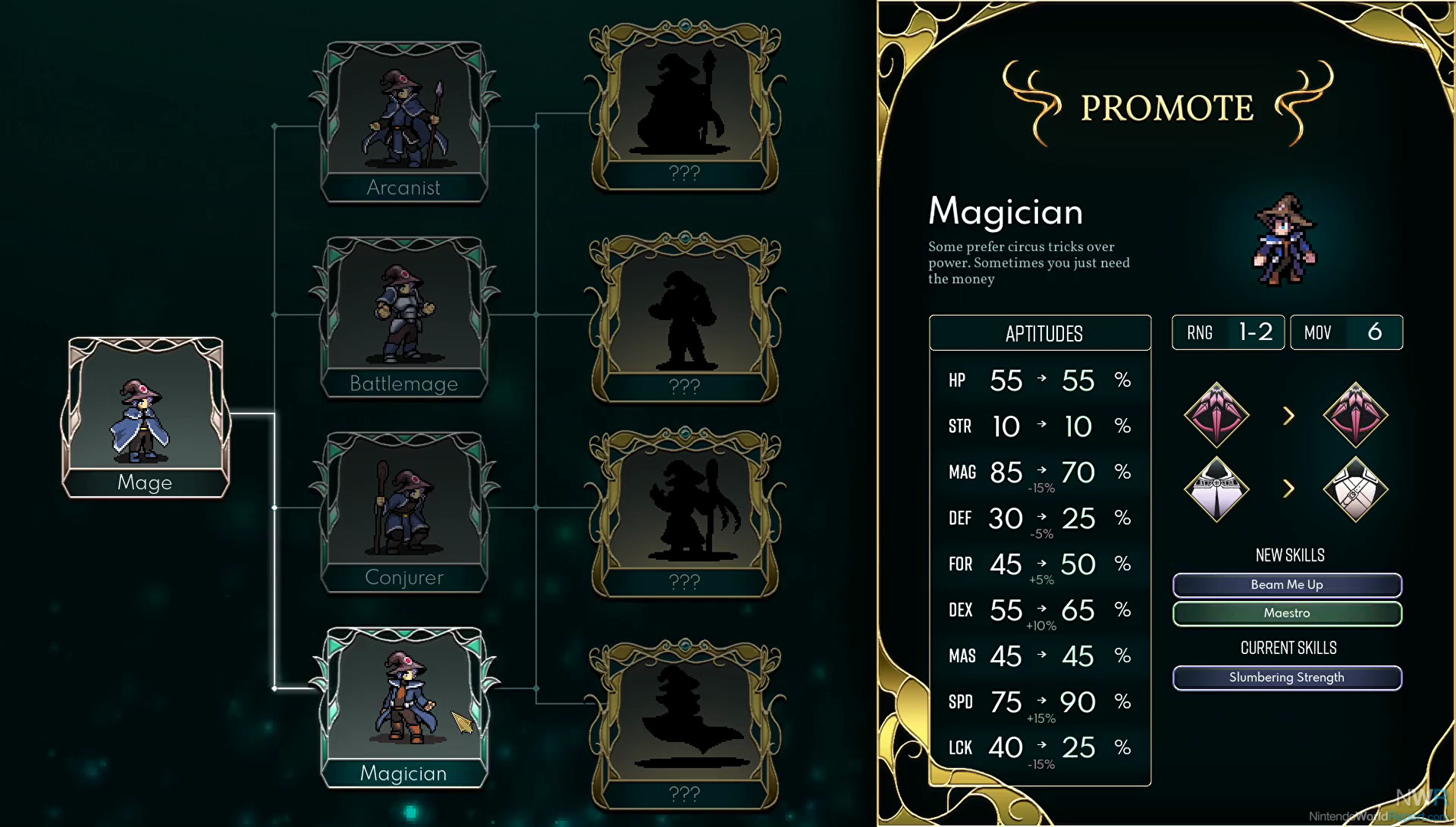 There is a caveat though. The class you choose determines both damage and weapon types for your units, with weapons playing a part in the advantage system. This is Dark Deity’s equivalent to the weapon triangle in Fire Emblem. But instead of the intuitive rock-paper-scissors dynamic of the weapon triangle, the advantage system is much more complex. There are nine types of damage and four types of armor, and they all relate in different ways. For instance, piercing damage has a minor advantage against cloaks and a major advantage against chain armor, however it is weak against plate armor and leather armor. Fire magic is strong against leather and cloaks but weak against plate and chain. Again, there are nine damage types and four armor types, and both types are mixed and matched across the dozens of classes available. Needless to say, it can become very overwhelming very quickly. If anything, Dark Deity’s advantage system behaves more like Pokemon’s typing system than it does the weapon triangle. Thankfully, the game does alert the player about whether a matchup is advantageous or not via up or down arrows marked by each unit when one is selected. However, this little visual tool does not tell the whole story and for most of my playtime I felt I relied too heavily on its guidance instead of thinking through my moves with the mechanic in mind. This is a shame because there is merit in a system this deep. I can’t think of a single damage or armor type that is superior to the rest and all of my units, even the weaker ones, felt useful in the right matchup. I imagine that this system pays off nicely once it clicks; it just might take time, patience, and deliberate practice to get there. 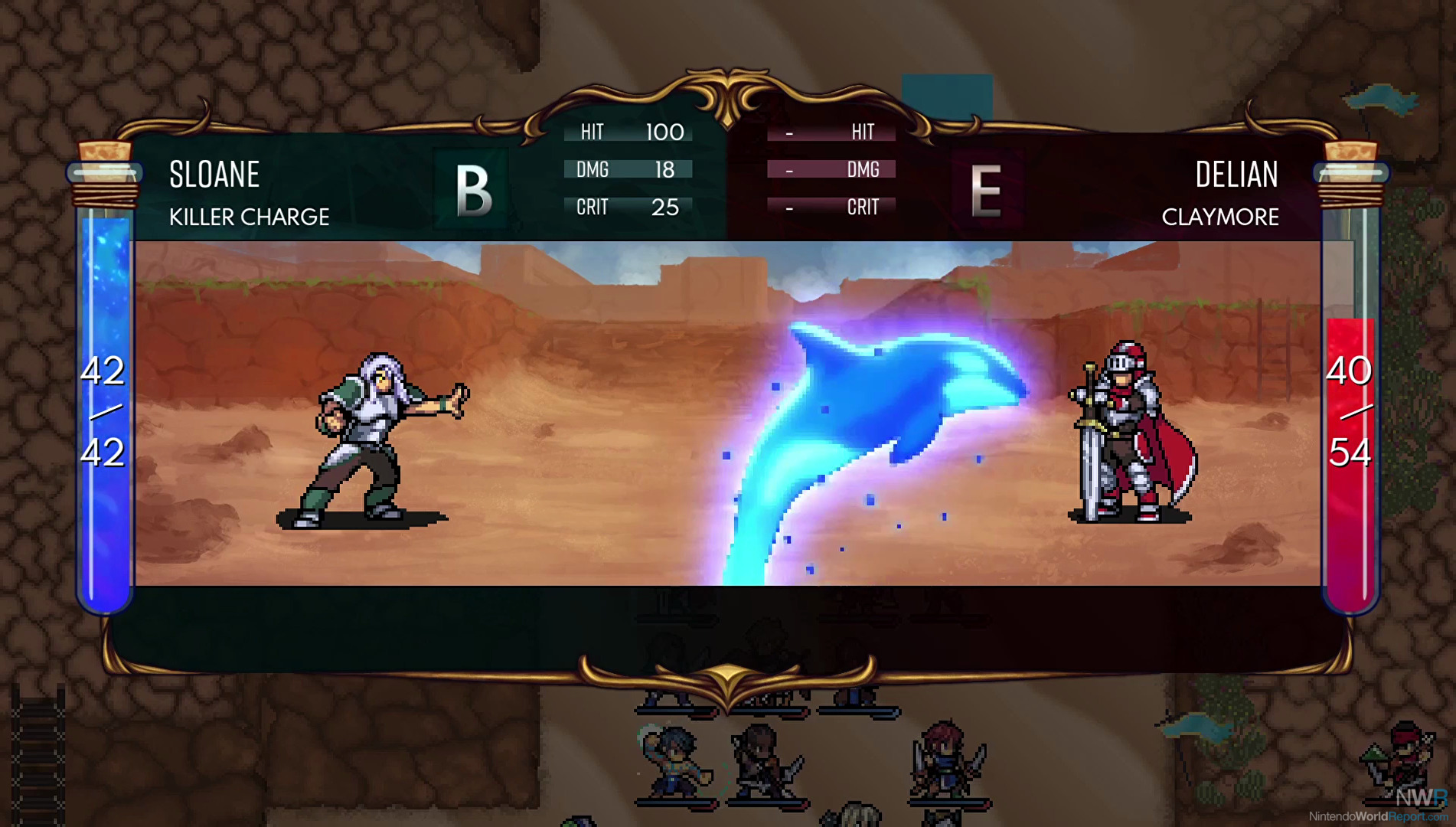 Dark Deity is the debut game of Sword & Axe LLC, a brand new studio staffed by first-time game devs. It is remarkable to see this game get so far in so little time, from a Kickstater launch in 2020 to a Steam release in 2021 and now a Switch port in 2022. You can feel the passion in the intricacies of the systems, character art, the gorgeous pixel animations, and the charming flavor text. Unfortunately, you can also feel that Dark Deity feels like a rough draft rather than a finished product. This is most evident in the UI elements and menus that are poorly laid out, confusing to navigate, and frequently unresponsive. For a genre as menu heavy as Strategy RPGs, it is very unfortunate that this could not have been cleaned up before release. But that’s not all. Tutorials are bizarrely small text windows and some text isn’t formatted properly, especially when displaying non-English languages. I’ve come across a bug where I couldn’t move a unit during a turn multiple times, and loading times between chapters lasted much longer than expected for a game of this scope. Music lacks oomph during battles and the level up sound is more of a whimper than a fanfare. This severe lack of polish does not eclipse the brilliance peaking through but it does dim it.