Dawn of the Monsters (Switch) Review

I’ve always been surprised by the distinct lack of kaiju-based brawler games out there. The most obvious example of this genre is likely King of the Monsters and its sequel, which you may remember from your days playing NeoGeo cabinets at Pizza Hut. Godzilla: Destroy All Monsters Melee and its sequels, which fell in quality over time, are the next best thing. But for the most part, all of those games were one-on-one arena fighters, more like wrestling games than brawlers. King of the Monsters was even known for its button-mashing grappling system. That void, friends, has now been filled by 13AM Games, who you may remember from Runbow, Double Cross, and Pirate Pop Plus. They’ve created quite the kaiju/tokusatsu world in Dawn of the Monsters (DOTM) and it’s a lot of fun.

On the story side of things, DOTM takes place a few decades in the future where rampant climate change has awoken giant kaiju called “Nephilim.” Humanity creates the Defense Alliance Worldwide Network (“DAWN”) to combat the threat using two controllable Nephilim, Megadon and Ganira, and two humans—Ultraman-like hero Eiji Murasme, who can transform into the giant warrior Aegis Prime, and Jamila Senai, who pilots the colossal mech Tempest Galahad. In each mission, you’ll uncover new Nephilim and learn more about their rise to power, as well as the structure of DAWN itself.

The game plays like an atypical brawler—think Streets of Rage— where discarded monster heads and buildings are your pickup weapons. You’ll choose a character for each mission and then take them to pound town, stomping through cities and smashing in kaiju skulls. Each level, which is made up of several stages, takes place in a certain geographic area (like Canada or Egypt), with your ultimate goal being to destroy the Nephilim “nest” and guardian boss.

In addition to walloping monsters with office buildings (always supremely satisfying), the DAWNsters can unleash a variety of light and heavy attacks, a charging attack, and super moves—RAGE attack energy builds up over time, and unleashing them slowly fills up a secondary bar for your Cataclysm attack—an ultra technique that tends to occupy most of the screen. You’ll want to save the latter for boss fights or to keep yourself from being completely mobbed by enemies. RAGE attacks have a variety of effects both offensive and defensive, and thus giving an air of strategy to the gameplay.

Unlike Streets of Rage, though, DOTM offers some defensive capabilities as well. You can block, parry (by blocking just as a hit lands), or perform a short-range dash. Perfect dashes will negate damage entirely but I found them difficult to rely on when facing an onslaught of angry monsters. In fact, I found all these defensive maneuvers hard to wrap my head around; I’m just not used to thinking about blocking or dashing in the context of a brawler, but it’s absolutely imperative that you learn this stuff because starting around the third level, the difficulty steps up considerably. 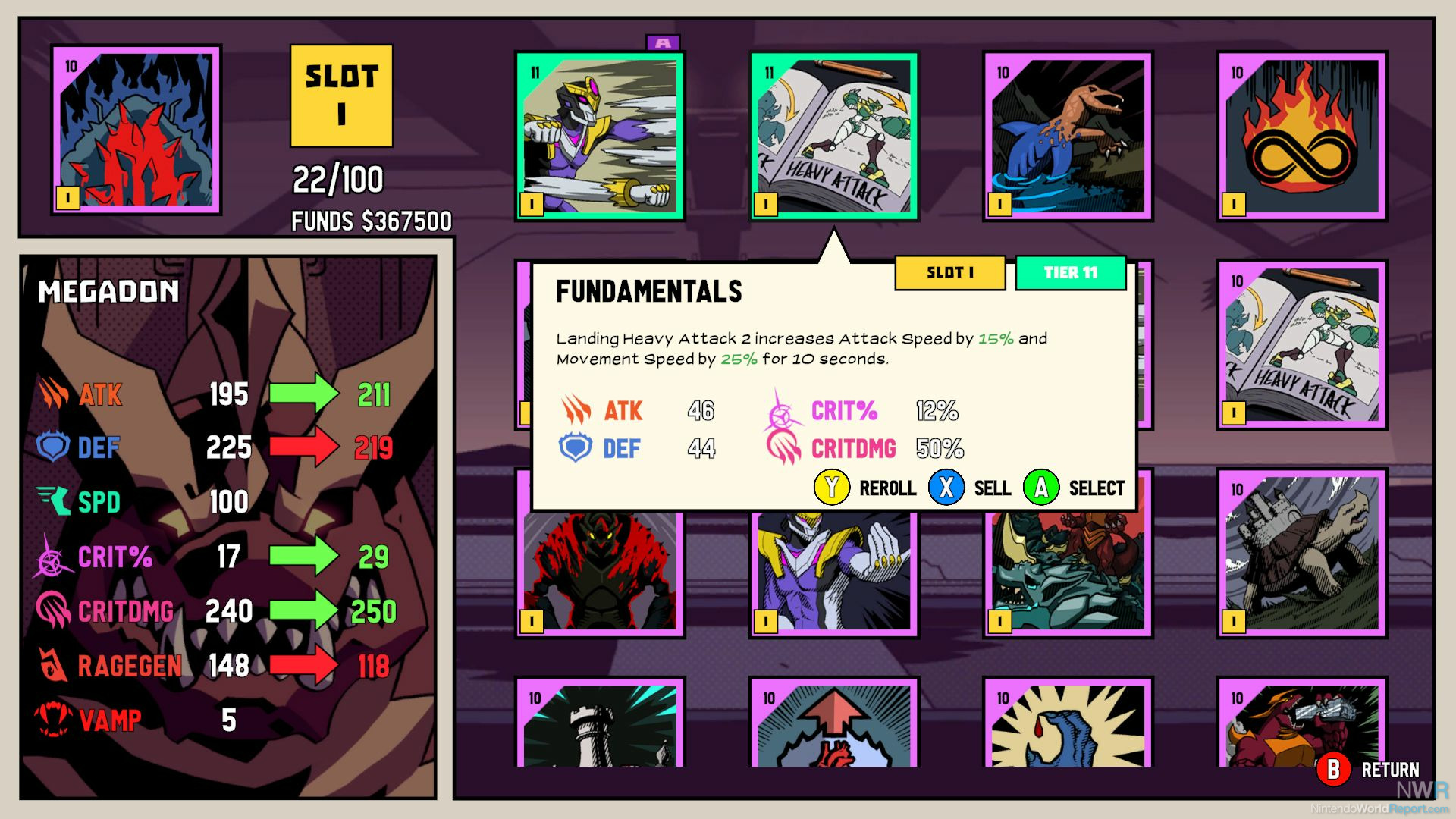 Completing a stage will reward you with DNA Augments, which are essentially equipment that modify your monsters’ stats. Each monster can use three Augments at a time, and each Augment has multiple tiers of power. Just because it’s a convenient analogy, I’d compare them to the various Coils & Weaves in Horizon Zero Dawn/Forbidden West. They usually result in a slight remixing of your monster’s stats as well as an added effect, like increasing your monster’s speed for a few seconds after a heavy attack or allowing executions (see below) to fill up your Cataclysm meter. There are a lot of Augments to mess with, and you’re encouraged to replay stages to get a better grade, which may result in a better choice of Augments. You can sell unused Augments or “reroll” the ones you earn to try and get fresh sets.

However, all the Augments in the world aren’t going to help much if your defensive game is weak, so I encourage you to try and perfect it. Enemies will telegraph attacks, and some can’t be blocked, so perfect dodges are your only option there. Furthermore, once an enemy’s health is in the red, you can press B to “execute” them, which gives you some health—and other effects depending on your Augments—but uses up one of your Rage bars, so you’ll want to be careful with it. The training area is of limited utility; I found it more helpful to replay stages to practice against specific opponents.

I tried to cycle between the four playable characters regularly, but I definitely wound up defaulting to two if I was having a hard time finishing a stage: Ganira is tough to stagger, has heavy attacks for days, and can spawn an AI-controlled crab buddy who will draw enemy attention. Aegis Prime is the most melee-focused character with quick attacks and seems to take less damage than his peers. Much as I love Megadon, he’s easily overwhelmed and doesn’t have the range of Ganira. Tempest Galahad is the ranged fighter, with a variety of energy-based weapons that unfortunately all feel comparatively weak. Her Rage attacks are similarly underwhelming, though her Cataclysm attack is basically a win button when you can activate it.

That said, this is where Augments come into play. I eventually found an Augment combo that turned Megadon into an unstoppable powerhouse, and I suspect I could do the same with Tempest Galahad.

Each level ends in a boss fight, and these are generally quite enjoyable but may take a few tries until you learn all their telegraphed attacks. I’ll talk about two-player co-op here, as it definitely helps even things out in this monster mash. Given DOTM’s focus on balancing offense and defense, however, it’s not in the same “pick up and play” category as Streets of Rage 4, but maybe River City Girls, which has a defensive option and complex attacks. The point is, you’ll want to let your couch co-op partner get some practice in before wading into the later levels.

Between missions, you will often be able to listen to conversations between the human characters, which helps move the story along, view unlocked art and information files, and buy permanent stat upgrades (primarily Health & Rage). Additionally, you can buy different color schemes for each monster, which you can cycle through when choosing your character before a mission. Most are callbacks to famous kaiju and tokusatsu characters.

Any downsides? Like most brawlers, the game will eventually start to drag as you’re essentially doing the exact same thing in every stage. There are a few places where the difficulty unexpectedly skyrockets—in an early cityscape, you must fight through two waves of monsters and get to an extraction point in less than about a minute and thirty seconds, which I found extraordinarily difficult by my lonesome. In other cases, it felt like some areas just had waves upon waves of enemies coming after me, and I’d wind up getting killed towards the end, only to have to start over from the checkpoint. In both instances, having a second player would have helped, but that’s not always possible. I was banging my head against the wall in level 3-3, which ends in a seemingly endless parade of monsters followed by two minibosses stomping out together. Tempest Galahad was not up to the task after several tries, so I exited out, called in Ganira, messed with its Augments, and trounced those clowns on the next attempt. If you’re having trouble, don’t be afraid to exit out and switch up your strategy.

But that’s a relatively minor complaint since each stage is so short. I’m also willing to forgive because 13AM Games has built a charming kaiju brawler that, while paying homage to the giants (ha!) of the genre, feels wholly unique. There’s a lot of game here, and there are a lot of places they can take this franchise. DOTM is a fun time, and one I’ve greatly enjoyed.