Ever since the release of the original Rune Factory game, developers have been trying to create the perfect balance of farming simulation and action. Marvelous’ First Studio, the company responsible for Daemon X Machina, is here to take their own stab and bite at the genre with the release of Deadcraft. Deadcraft takes place in a future where meteors have fallen from the sky and destroyed the earth, bringing with them a virus that raises the dead. It’s Mad Max meets the Toxic Adventure with Harvest Moon gameplay and a dose of superhero abilities.

The characters are very in your face with their design, such as Brandon, the first main boss of the game, who has hair reminiscent of Akuma from Street Fighter and has staples in his face to keep his left eye open. A good amount of the text is voice acted and the developers were clearly going for B-movie overacting given how over the top everything is. You play as Reid, a half man, half zombie, who is looking to exact revenge on Nebron, the post apocalyptic overlord who has kidnapped Reid’s best friend, Gene. The game opens with you getting cast out of the Ark with little to no health and no resources. You grab an ax, eat a dead rat, and get started on your epic adventure.

Deadcraft has all the makings of your basic survival game. You have a hunger meter that you need to keep filled by eating rats and eventually food you can grow in your garden. There’s also the thirst meter that you keep filled by drinking a sludge material that actually damages you as well until you learn to make aqua cola. You also have an energy meter that slowly depletes every time you take an action. If it runs out, you start losing life. In order to get that back up, you’ll have to eat certain cooked foods or rest at your residence. You can rest for any amount of time and get all of your health and energy back up—just make sure you have filled up your hunger and thirst meter. These hunger and thirst meters don’t really affect you too much after a while since you can improve them fairly early through the upgrade system.

To put a spin on the survival genre there is also the zombie meter. The zombie meter acts as a magic point bar of sorts. The more you use your zombie abilities, the more human you become. The zombie meter takes the appearance of your character’s face, where half of it will look zombified and become more or less so depending on what you do and eat. If you go full zombie, you will move slower and will be attacked once you enter a town or pass by any human character. When you have used up all of your zombie power, you will become completely human: your defense increases, and your life bar shrinks. This gives the game a cool system to play around with while you are fighting hordes of the undead. There are also specific food items that will increase or decrease your zombie meter. 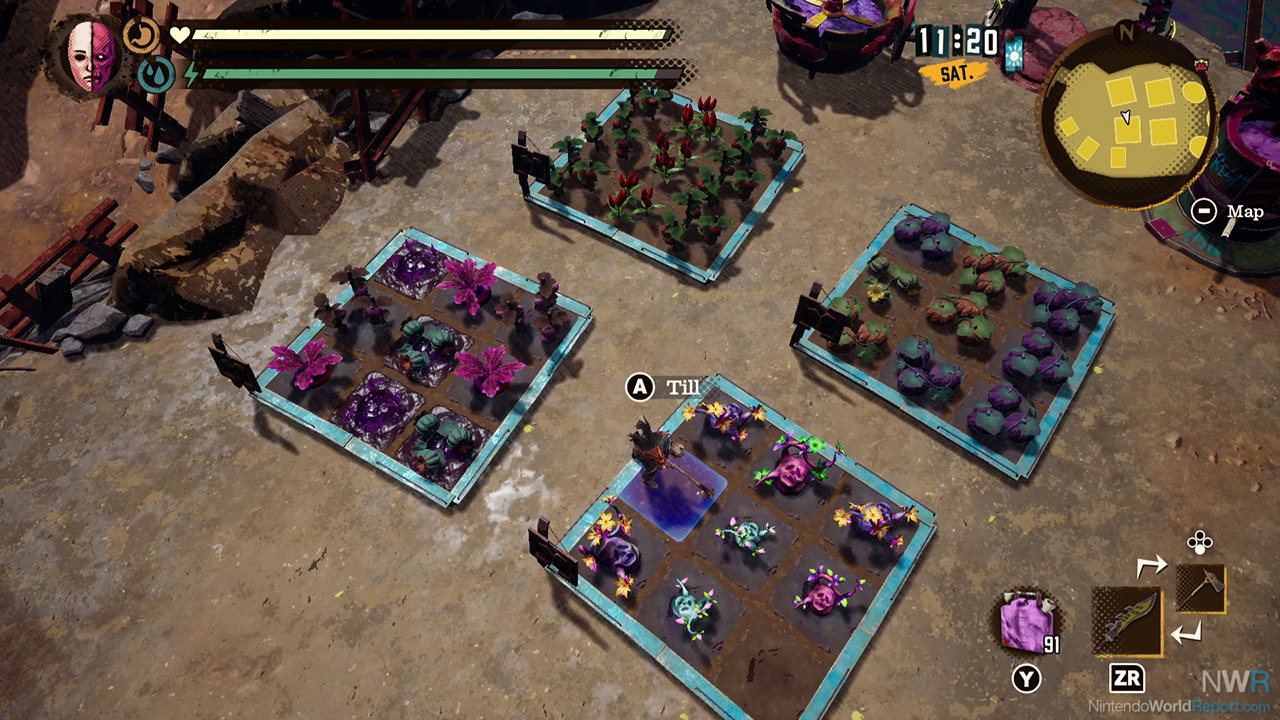 The first place you go to in the game is the slums, where you will run into a shady character named Vernon. He asks you to rescue an even weirder character, Zombie Gramps. This is the first mission you have to complete in the game. Vernon is the one who will give you the main missions, and Zombie Gramps will help you upgrade your zombie abilities. One of the major missteps of Deadcraft is the story progression and mission completion. In the first couple hours, everything seems to be going very smoothly and it seems like you will head to the Ark in no time. Unfortunately, the missions take a turn, and for the next few hours you are just doing fetch quests, which get tedious very quickly. Once you do enough quests you get to fight a boss and move on to the next area, where you will find more things to collect and craft with. Hooray? The experience eventually devolves into an endless loop of search, kill, deliver, search, kill, deliver.

A lot of these quests also involve creating specific equipment at your residence. You have an area on the map by your house where you can farm and create machines. You can unlock the abilities to create these machines by getting skill points. You can earn skill points by doing basically anything in the game, which is cool as you will get points for killing zombies, cooking food, finishing missions, etc., which helps with the game’s sense of progression. You can make so many different machines, like water filtration machines, smelters, metal cutters, and more. Each of these machines will require a certain number of resources that you need to collect along the way. These resources appear at random on the main hub but can become a pain when you are looking for one specific thing in particular. You can buy some of these resources from the slums, but they will only sell a certain number at a time and will only restock once per in-game week. This cadence will leave you scouring the map for weeks to just get one thing to progress the story, making the game feel like a bit of a slog. 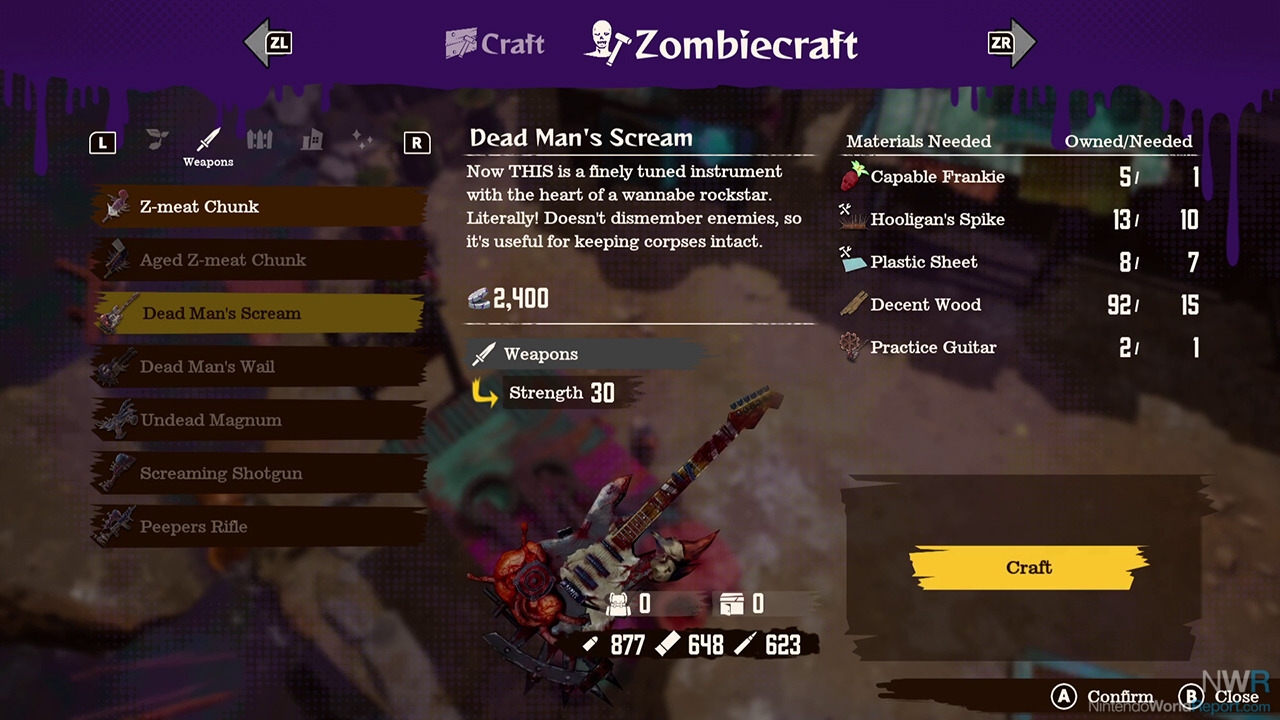 As far as the farming is concerned, you can create fields at your residence and buy seeds from the slums just like any other farming sim game. You have to till the soil and water the crops whenever they need it one square at a time. Thankfully, you can upgrade your skills to where you can till and water an entire field with a single button press. You can also alter your produce by watering the crops with zombie blood instead of aqua cola, which creates a zombie version of the food that you can use to fill up your life meter and increase your zombie meter. There are also zombie versions of practically all of the machines you can create for great bonus effects. You can make weapons out of the zombie parts; you can even grow zombies in your garden. The zombies you grow can be made into bazooka units for some of the tower defense parts of the game (yes, they have those, too), or you can use them as a Pikmin-esque army that will follow you into battle and defend your honor at any cost.

Deadcraft can be really fun at times. The story, setting, and overacting will really grab you if you are into the low budget monster films of yore. Just be ready to do a lot of search and fetch quests. These can really slow down the pacing, but when the adventure gets going, it can be a bloody good zombie killing/farming time.

Behind the Frame: The Finest Scenery (Switch) Review