Eiyuden Chronicle: Rising is the byproduct of a very successful Kickstarter for Suikoden spiritual successor Eiyuden Chronicle: Hundred Heroes. A 2.5D action-RPG (as opposed to the latter’s turn-based style), Rising starts slowly and constantly gets in its own way by forcing you to return to the town of New Nevaeh all too often, sometimes simply to check in with a townsperson or two. Clocking in at 8-10 hours in length, the actual experience ends up feeling even longer due to bouts of monotonous gameplay and lengthy, padded exposition. The attractive art and more satisfying final moments don’t do enough to make Rising feel like much more than a crowd-funded afterthought.

The story follows scavenger CJ who has set out to fulfill her family’s legacy of returning home with a larger and more precious treasure than that of her father. She seeks out the Runebarrow, a series of underground mines and labyrinths where many an adventurer have come to seek out their own fortune. Above the Runebarrow is the town of New Navaeh, and it’s mayor Isha who has final say on just who can delve into the caverns below. It’s also Isha who entices CJ into helping her assist the villagers with a variety of requests as a way of earning an explorer’s license, which would allow CJ to continue her personal quest in earnest. Part of Isha’s scheme involves a stamp card, and it turns out that CJ gets massively caught up in collecting stamps from townsfolk she helps.

I hope you like completing side quests because that’s what you’ll spend most of your time doing here. Much of Eiyuden Chronicle: Rising involves accepting a task from an individual in town and then heading into one of the main areas outside its walls, such as The Great Forest or The Quarry to collect a particular material or item. Since many of the main quests are almost indistinguishable from the requests you regularly pick up, the experience as a whole ends up feeling quite grindy, almost like a mobile game. Every completed request awards experience points; most provide money and items, too. You also start out with a silver stamp card that takes about 30 stamps to fill up, which then converts to a gold and then a platinum card. The benefits of completing a card aren’t readily apparent, but doing so seems to expand the number of people in town, perhaps only in terms of background visuals.

It’s unfortunate that the action-RPG combat and light platforming aren’t emphasized more because their scarcity actually makes them a breath of fresh air compared to the tedious sim elements. CJ wields a pair of pickaxes and a dash move that allows her to escape danger. The second character who joins your party, Garoo, carries a big sword and can parry enemy attacks. The third party member, Isha, is a mage whose ranged-magic takes on the element of the rune you have equipped to her. Each character is mapped to a different face button, so pressing Y brings in CJ for an attack, X for Garoo, and A for Isha. They all have only a single basic attack and then a defensive/evasive move, but you can call in your back up party members for satisfying chain attacks.

The progression of the story and your individual characters is inextricably linked to the town’s development. You’ll need stronger weapons, tougher armor, and specific tools from different shops to make headway in the Runebarrow. Important objects that eventually come into play are elemental runes that allow you to charge your weapons with fire, ice, lightning, and earth; these make you more capable of dealing damage to specific enemies but also allow you to break down elemental barriers in the spaces outside of town. By exploring The Quarry more, you can collect rare materials and further upgrade your equipment. The issue is that there isn’t enough gameplay or challenge in Rising to make dedicated exploration and obsessing over the requests of the citizens of New Navaeh a worthwhile endeavor. In other words, because so many of the side quests are of the fetch variety and because the only real difficulty spike comes with the final boss, it doesn’t feel all that gratifying to check off all the boxes the game throws at you. 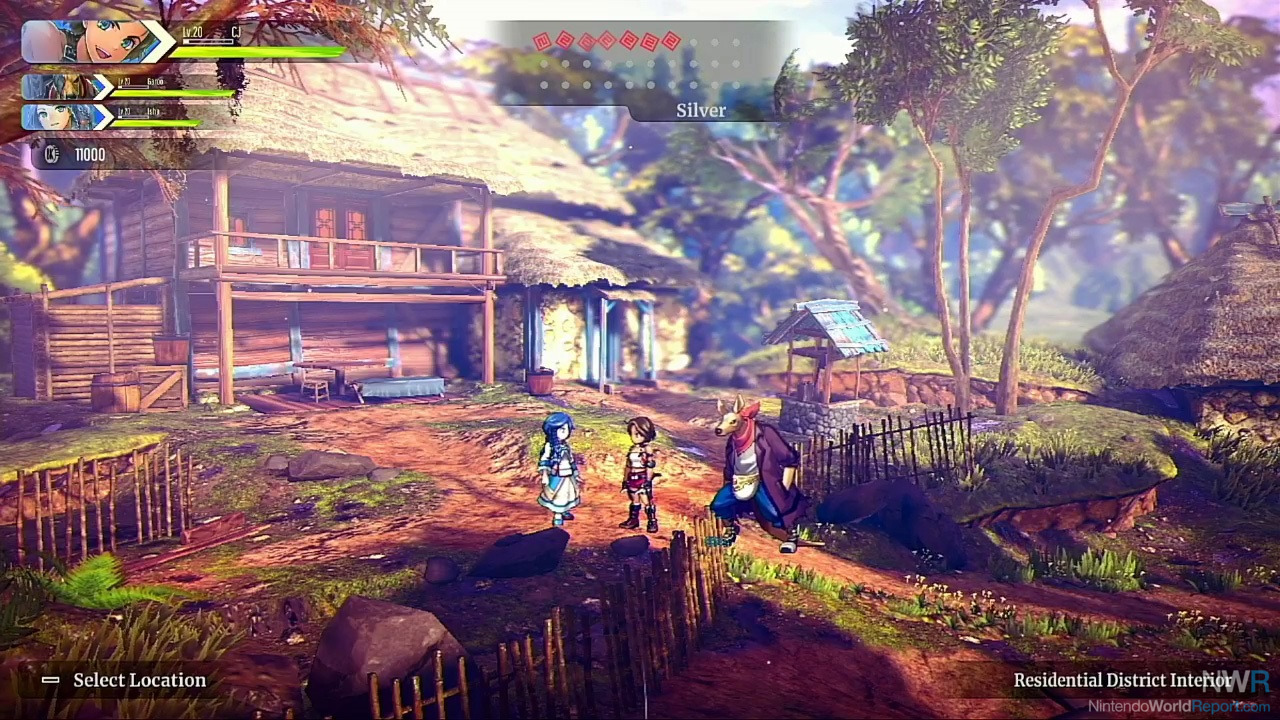 Another double-edged sword is the map and fast travel system of Eiyuden Chronicle: Rising. While it’s easy to skip around to different districts of the town, later areas of the Runebarrow abandon the convenient fast travel in favor of forced backtracking and numerous jumps between closer checkpoints. The back half of the game feels padded because you have to walk back and forth through the same areas over and over, and there isn’t enough visual or enemy variety to make such excursions enjoyable. Also related to traversal is the fact that running through town blurs the background text, so you can’t even read the names of store signs or people unless you stop moving. Nor is the text size adjustable, and I often found my eyes growing tired from the small size and the font type itself.

As someone who enjoys town-building mechanics in RPGs, like those of Ys VIII, Xenoblade Chronicles, or Dragon Quest Builders, Eiyuden Chronicle: Rising relies too heavily on them, at the cost of telling an engaging story or offering compelling action gameplay. The too-frequent backtracking, mind-numbing side quests, and overall lack of variety make for an experience that is tough to recommend. An unlockable hard mode, 50 in-game achievements, and the promise that Rising saved data will yield bonuses in Hundred Heroes are feathers in its cap, but Rising on its own is just too much of a slog. Here’s hoping that Eiyuden Chronicles: Hundred Heroes lives up to the success of being the number one video game Kickstarter of 2020 because its prequel certainly does not.