The bare elements of Fishing Paradiso are that it is a chill fishing game with a lot of words, but that reductive description doesn’t tell the whole story, because this is a thoroughly entertaining game that has a lot of heart. Made by Odencat (the creators of Bear’s Restaurant), it doesn’t hide its mobile origins as you can basically play it all using the touch screen on the Switch, and the overall progression lends itself well to short bursts. However, Fishing Paradiso is mobile-esque in the best ways, making for a highly enjoyable narrative-driven fishing RPG.

At the beginning of the game, you’re dead. Following in the footsteps of Odencat’s previous game Bear’s Restaurant in which you help run a restaurant in the afterlife, you wake up in the afterlife and start fishing. There’s a narrative function as your fishing is a way to help others and also seek out your own prying questions about your circumstances and bizarre dreams. The writing is sometimes stilted in its localization, but the cute sprite graphics belie an emotional weight. These are characters dealing with death in all sorts of varieties. They might be lonely or waiting for their beloved to join them. They might start a fight with an angel or try to find some sort of meaning in the mess of existence. The fishing hooked me, but the frequent bouts of existentialism reeled me in.

The fishing gameplay has just enough depth to be interesting, but not enough challenge to be frustrating. You cast a line at a length determined by a meter and wait for a fish to catch on. Then, you feather button presses to reel in the fish without expending your stamina meter. If you hit a brick wall where a fish is impossible to catch or won’t bite your bait, just grind out some catches or complete some side quests to purchase upgrades for your various fishing abilities, ranging from stamina to fish lures. 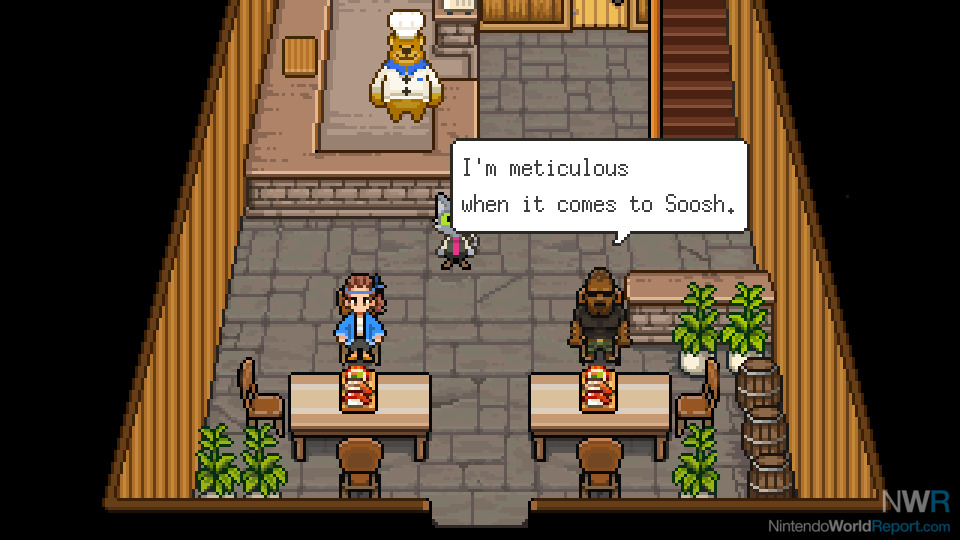 You generally follow a main quest, but you make friends in the afterlife who then send you messages with various side quests. As you settle into the rhythm of the game, you will likely have a cadre of side quests to do alongside your main quest so you can bounce around various fishing areas seeking out what fish you need to catch to complete each quest. Helpfully, fish you need for quests will be highlighted in the water, so you always have an indicator of what’s needed. In addition to all of these quests, you can even stockpile fish for different meals courtesy of Bear’s Restaurant (yes, this is a crossover episode!). I have not played Bear’s Restaurant so I don’t know all of the references, but after playing Fishing Paradiso, I’m going to check it out.

The simplicity of Fishing Paradiso is a facade for the beating heart at the center of this fishing game. It scratched all the right itches for me, providing a pleasant fishing experience that was relaxing without being mindless. It tells a deep story (albeit with some stilted dialogue) that claws at what the afterlife is and deals with some heady topics in a playful, contemplative way. Distill Fishing Paradiso to its essence and it’s straightforward, but this is a game that is far greater than the sum of its parts.