Dusting off the ol’ backlog can be a daunting task, especially when it comes to games you wanted to tackle long ago. It can be like a scourge in the back of your mind that has the chance of taking over everything. Fortunately, I’m finally getting to a review I’ve had on my plate for some time! Speaking of, Flynn Son of Crimson, a 2D action platformer from Studio Thunderhorse, jumped onto the eShop through a successful kickstarter campaign. It earned $63,218 of the requested $40,000 thanks to nearly 2,500 backers. With their financial requirements, all that was left was the followthrough. Did the invested blood, sweat, and tears father a new indie darling?

The story begins with the crimson-haired crusader in deep slumber awoken by whispered warnings: “…Please Flynn… Rosantica needs you… Wake up…” You rise up next to your majestic dog and Island Guardian, Dex, and your first task is to grab a sword and… walk your dog! Even majestic guardians need their morning walkies, so you venture out into the world.

What stands out instantly in Flynn Son of Crimson is the gorgeous pixel art. Towns are vibrant and characters are extremely expressive; your good boy Dex is a pleasure to watch run across the screen as he tails Flynn. This world has been crafted with a lot of love and is extremely well realized.

In this world, you make your way from stage to stage, through a variety of levels in attempts to reinvigorate your poor canine companion who had their power stripped away by a mysterious assailant. In their failure to claim a hidden power, the power of the Crimson Sword is bestowed upon Flynn. In retaliation, Dex’s abilities and essence are ripped from him. You set out on your journey like a red-haired John Wicke with similar, albeit less murderous, determination. This game is rated E for everyone, after all. 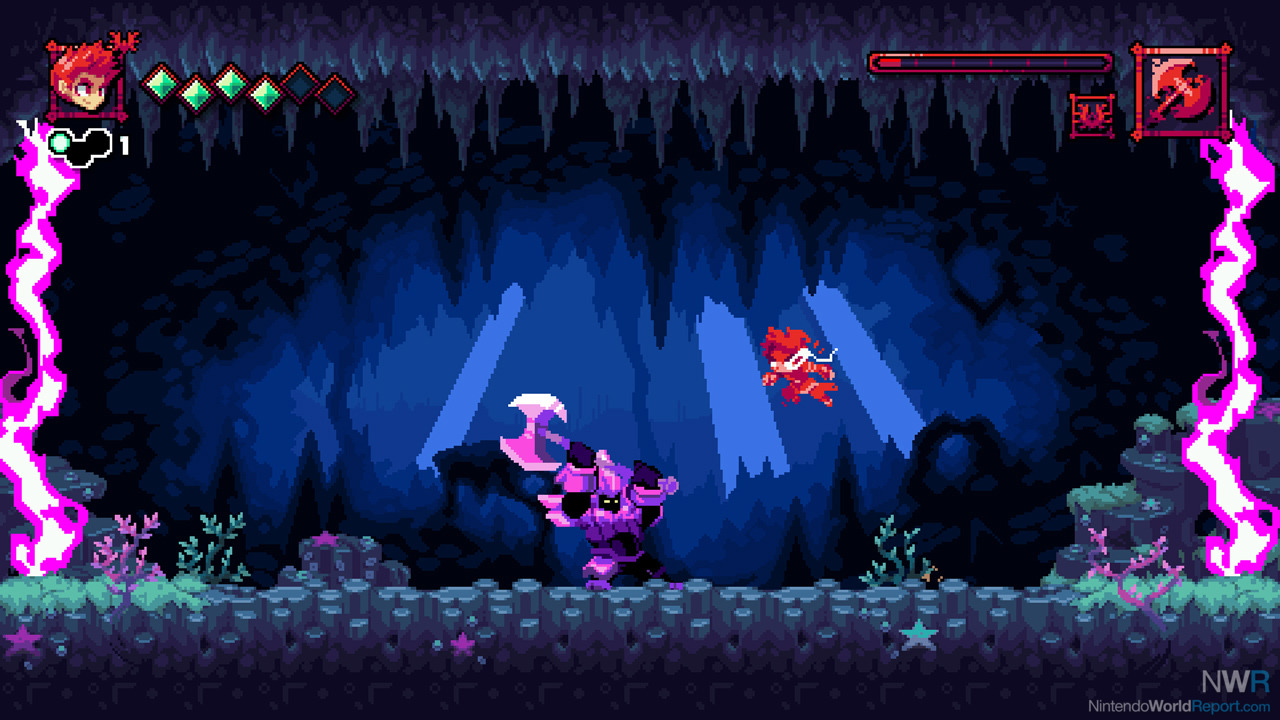 Combat is a brand of hack and slash. You have an incredibly useful dodgeroll to complement your sword swings and, later on in the game, magic. Enemies have both a red health bar as well as a yellow stagger bar that builds up with each hit. Once staggered, opponents are vulnerable for a few seconds. A gripe that surfaced early on is that enemies can feel like they have far too much health. Especially on hard mode, dodging the same cave troll back and forth before you hit them 10 times to stagger or finish them off can be monotonous, especially when that is but one troll out of 40 enemies for the stage. Needless to say, it wasn’t long before I dropped from hard to normal, and then easy to quicken the game’s pace.

Each level contains a few hidden paths to find a collectable item for completionists, but otherwise it’s a very straightforward affair. Your task is to reach a Goddess statue at the end of the stage, jumping, fighting and unlocking doors in between. Within each stage you can collect crimson gems that function as the game’s currency and are used to upgrade your abilities and unlock new weapon combos. The other collectable being green gemstones, and these allow you to press the X button to replenish your life orbs, which was a welcome mechanic in place of standard health pickups and allowed for more timely use. While magic can be upgraded as well, it never felt ultimately useful. It takes far too long to charge an attack and its damage or practicality never matched my expectation given how heavily I invested into it at the outset. What it boiled down to is that the combat mechanics often felt too slow. Without going into spoilers, I can say that the combat does eventually pick up. Flynn gains abilities to take out the mobs of enemies with relative ease. But by the time my Flynn was upgraded and his repertoire felt appropriate, the game was over. One of the biggest initial allures of the title is playing alongside Dex, and it’s a shame to say that his inclusion in the game is minimal and does not live up to the obvious potential. 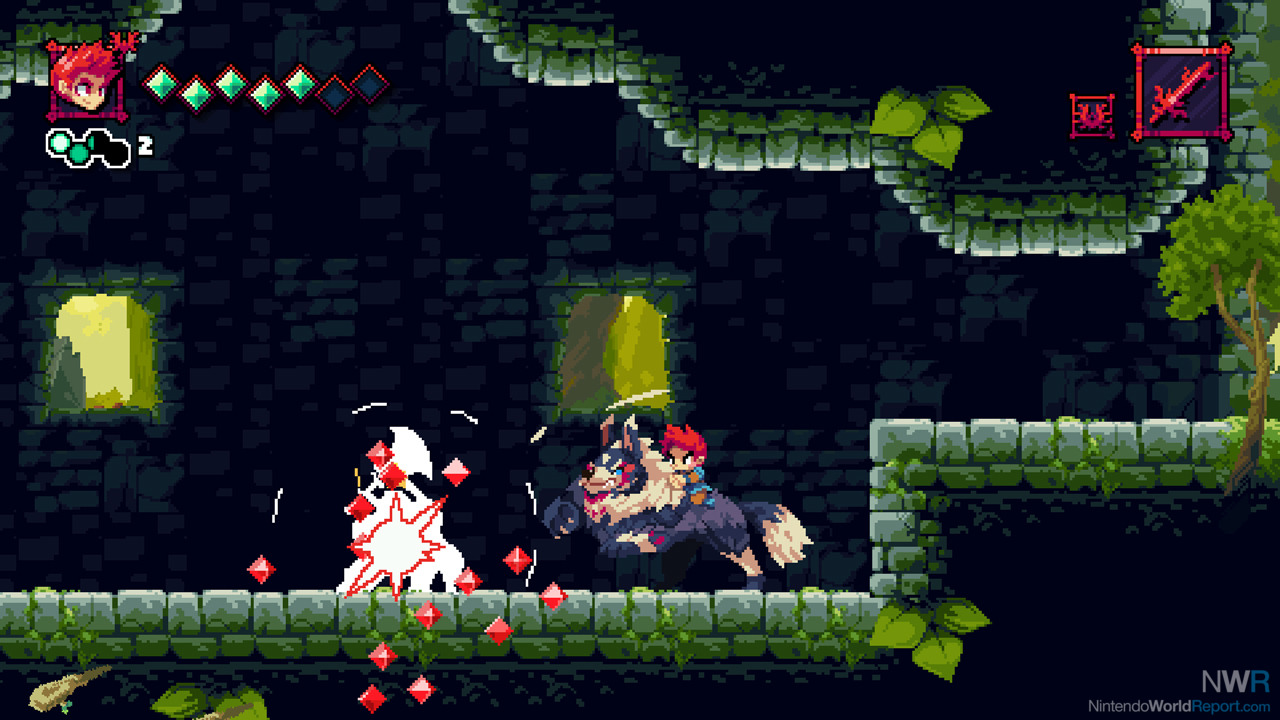 Some stages do try to offer variety by containing alternate paths to end the stage leading to new paths on the worldmap. At times “The Scourge” surfaces, a malevolent force to counter your crimson abilities that ne’er-do -wells are using to corrupt the world. During these moments, you are forced to backtrack to a previously visited stage and smash a scourge gem which is emanating in the area. These stages are mandatory roadblocks that come out of nowhere, don’t offer much difference in gameplay, and really disrupt the flow of the game. Bosses are not wholly original either; it’s a case of watching the patterns and attacking when possible. Their inclusion is thankfully minimal with the final boss being, at the very least, a visual spectacle.

While I can say that the pacing and gameplay never fully clicked with me, it might for others. There’s quality in the world of Rosantica and things to appreciate about its story, art, and characters. That being said, this game has potential hidden under some lackluster stages and unbalanced combat. I would love to see another story told in this world with some further polish on the gameplay if Studio Thunderhorse was ever to make a second showing. Should the slower pace not be a bother to you, there’s a lot that Flynn Son of Crimson has to offer. But amongst a sea of similar genre entries on Switch, I’d be hard pressed to recommend this one.