Did you guys know that GetsuFumaDen: Undying Moon is a remake/sequel to an ancient 1987 Famicom game called Getsu Fuma Den? It basically plays like Zelda II, but the sidescrolling action sequences are more like Castlevania or Teenage Mutant Ninja Turtles. Look it up on Youtube sometime; it’s pretty wild. Now, twenty-five years later, Konami has resurrected this curiosity as a stunningly beautiful, but ridiculously frustrating, roguelite.

Let’s get that first part out of the way right off the bat: GetsuFumaDen: Undying Moon should win an award for its unbelievably gorgeous art style. The environments, monsters, and colorful animations are top-tier. The boss characters are big, bizarre, intricate, and lovingly crafted. Once I unlocked the seaside area, I never stopped choosing that route. In terms of art design, I don’t even know what to compare Undying Moon to. If the roguelite genre is the Matrix, Undying Moon is the “Lady in the Red Dress.” It captures your attention. It’s an order of magnitude better looking than its peers.

Unfortunately, you’ll have to play through it so often that that red dress does eventually start to fade.

Undying Moon is, unabashedly, Konami’s attempt to reverse-engineer Dead Cells, but it gets that game’s sense of upward mobility very wrong. In Dead Cells, you collect blue energy cells from fallen enemies and spend them on permanent meta-game enhancements: new weapons (which are added to item pools), new skills, and various passive bonuses, like keeping a certain amount of gold after dying. There’s a lot to unlock in Dead Cells, but the point here is that it all uses one type of currency.
That is not the case in Undying Moon. Two types of currency are used to unlock passive bonuses (green and yellow Tao symbols), each of which has several levels. As in Dead Cells, you can only spend this currency at the end of a given level. The difference is that, in Undying Moon, these currencies are depressingly rare. Upgrading weapons must be done on a per-weapon, not a per-weapon-type basis, and these usually require an entirely different set of random drops that generally consist of what any other game would call “materials” or “resources.”

Of course, if you die, everything you’ve collected disappears. You are given the option, upon completing a level, to go back to your home base with everything you’ve collected. There’s a risk/reward mechanic here, but practically speaking, if you want to make any real progress in Undying Moon, you’ll have to take many trips back to your home base to keep your items, then repeatedly replay the first or first couple levels often than you’d probably like.

Weapons are divided into main weapons, like swords and clubs, and sub-weapons, like bombs and magical energy bracelets. There is an unnecessary number of weapons in each weapon category, so you’ll be upgrading a lot of weapons very slowly. You’ll occasionally find blueprints for new weapons—another holdover from Dead Cells—but like everything else, they require specific drops that are exceedingly rare. During each run, you’ll collect gold and souls. Both can be used in certain areas to upgrade the power and passive bonuses of your weapons, but those upgrades only last the duration of the current run. Furthermore, if you haven’t unlocked a given passive weapon bonus in the meta-game, it simply won’t be available during the run, no matter how many souls you’ve saved up. The economy of Undying Moon is its biggest flaw—progress is just so glacial that it can become very easy to lose patience. 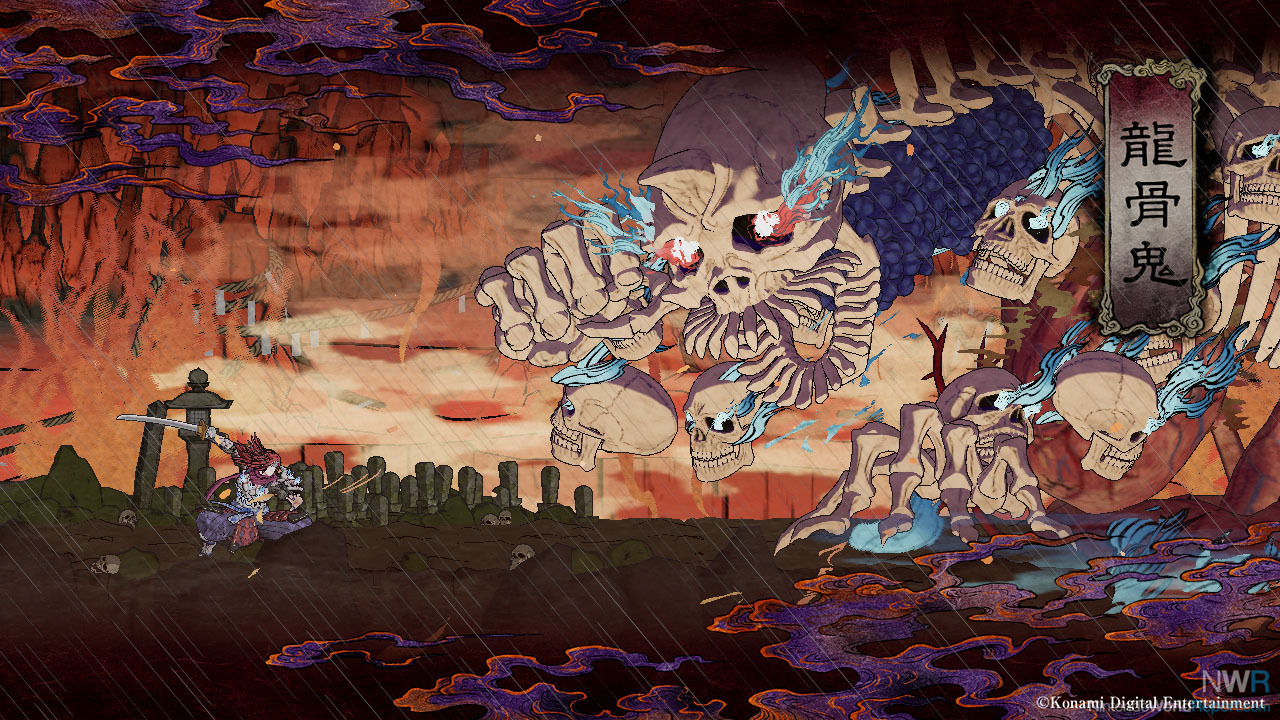 And it’s a real shame because the minute-to-minute gameplay is insanely satisfying. Combat is a blast, with lots of weapon types to mess with and plenty of different kinds of enemy monsters to tangle with, all pulled from Japanese mythology. As I said, boss encounters are amazing: big, powerful monsters who telegraph their attacks and have weak points to exploit, although some of them last a bit too long.

The way levels unlock is also something of a bear. You’re usually given two options when choosing the next area, but the second area is always locked, and can only be unlocked if the previous boss drops a key—which seems to be random. There’s a second character to unlock (Getsu Renge), and she plays a bit differently (essentially faster but weaker), but her weapons must be upgraded separately.

At this point, I have to ask: what was the point in making Undying Moon a roguelite? This may come as a shock to game developers, but not every game has to be a roguelite. I desperately want Undying Moon to be a linear, level-based adventure where I can see all the levels and fight all the bosses without enduring the tedious rigmarole that roguelites require. Keep the randomized level layouts! Keep the randomized paths and boss encounters if you have to, but just let me play your beautiful game without all these roadblocks. Eventually, I just got sick of Undying Moon. It was more frustrating than compelling, in part because it does so much right, but its wings are clipped right out the gate by its grind-heavy, roguelite trappings. There are better roguelites out there (Binding of Isaac and Dead Cells, for example), but I’m sorry to say none of them look nearly as amazing as Undying Moon.