As a huge platformer fan, the Switch has been wonderful for me over the past five years. Between Nintendo’s own efforts and a vast library of indie titles, my favorite genre has been extremely well represented on the platform, and I’m always up for a new take on the formula. Grapple Dog is the latest title in that line, focused on using a grappling hook to traverse environments and find collectibles.

As the title would indicate, the grappling hook mechanic is the central premise of the game, and it’s used in a variety of ways. Only certain surfaces, highlighted in blue, can be grappled, which prevents it from feeling overpowered, so traditional run and jump platforming also plays a big part in the level design. Along the way it does a really good job of keeping things fresh by introducing new kinds of enemies and blocks that make you approach levels in different ways.

The biggest problem with Grapple Dog is the controls don’t always feel precise enough for what the game is asking you to do. It’s too easy to slide off a platform or into an enemy after you’ve landed on it, and since you can only aim the grappling hook straight up or at a 45 degree angle, there are times when it feels like you should be able to hook onto something but miss. Most of the time this isn’t an issue, but for a platformer of this type it’s really annoying when the controls feel off.

Grapple Dog features nice 2D sprite art and a pleasant but unmemorable soundtrack. The story is your basic “save the world from ancient evil” and the dialogue is cute but there’s more of it than there needs to be. And before you ask, you CAN pet the dog when you complete a level. 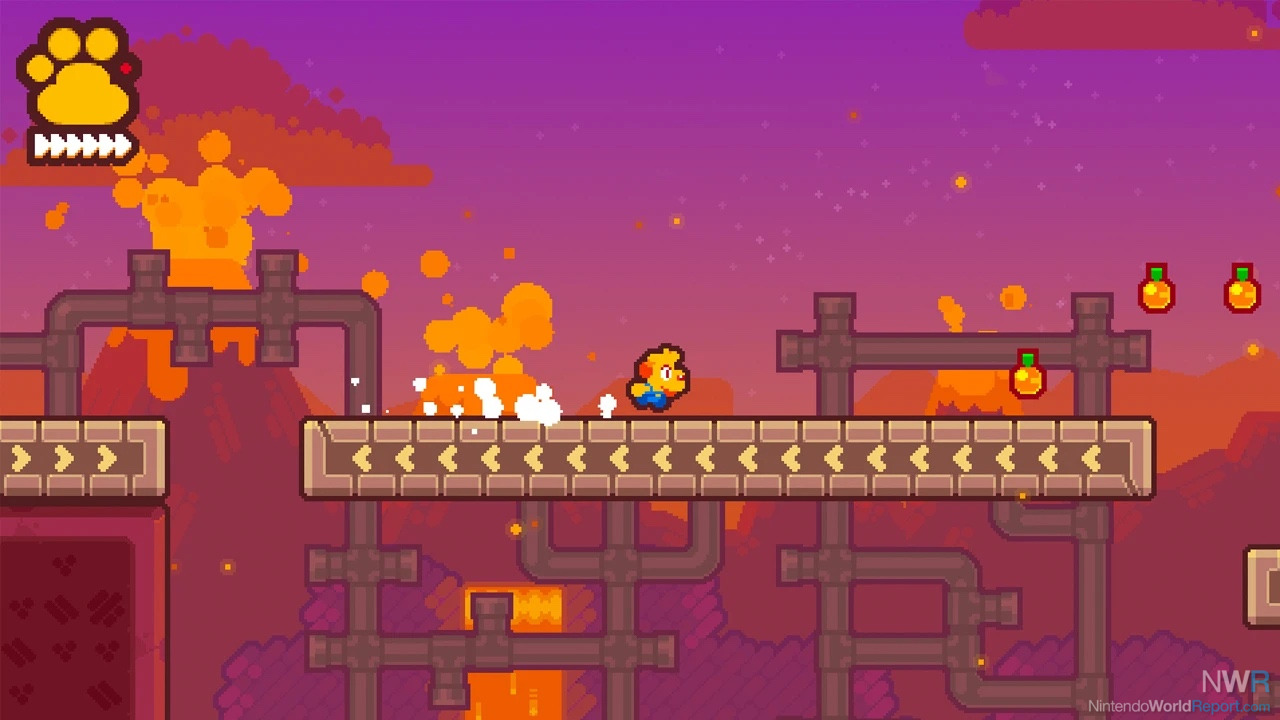 Apart from ringing the bell to end the level, the goal in each stage is to collect purple gems. There are five of them hidden throughout the level, like the star coins in New Super Mario Bros. or the flowers in Yoshi’s Island, and then another two available for collecting oranges, of which there are 250 per level, but thankfully only 220 are required to get the gems. There are also medals available for playing each level in time trial mode, and tokens for bonus stages in many of the levels.

While the many collectibles provide replay value, some of that can be frustrating. Levels will often include branching paths, where one way houses a collectible and the other is the path forward, but the game has a bad habit of not making it clear which way is which and then preventing you from backtracking once you realize you missed something. The unlockable bonus levels provide a different kind of frustration, as they often showcase the limitations on the game’s controls due to the level of precision they require.

Grapple Dog has some neat ideas, and it keeps them coming throughout the campaign so it continues to mix things up along the way, but it doesn’t really stand out in a major way. It’s an enjoyable game, but it doesn’t do any one thing exceptionally well. If you’re a platformer freak like I am it’s definitely worth a look, but there’s not much here to put it above some of the great examples of the genre on Switch.