I’ve always found Japanese horror particularly effective when it comes to the psychological side of the genre. Ikai looks to provide precisely that, with a story set in feudal Japan. You play as a young priestess, Naoko who finds her shrine beset by demonic yokai after she falls unconscious. While the story itself isn’t especially engrossing, the material is here for a gripping horror experience. On some platforms that may be what you find, unfortunately this Switch release comes with a lot of compromises.

The bulk of Ikai’s gameplay takes place in and around a small shrine deep in the woods. The environment is surprisingly mazelike and presents plenty of opportunities for getting turned around. After a brief introduction you’ll begin taking on malevolent spirits one after another as you seek to cleanse them from this once peaceful shrine. You don’t have any traditional weapons, so most encounters come down to some exploration and perhaps some light puzzle solving before ultimately needing to put enough distance between yourself and an enemy so that you can create a seal. Creating seals isn’t a particularly deep mechanic, but it is perhaps the most unique thing you’ll be asked to do. At key points you’ll use your controller to write out a specific symbol on a scroll. This feels an awful lot like any Mario Party minigame in which you need to trace a specific shape, and it works about as well. That being said, you do feel a real sense of tension as you scramble to complete it with a demonic creature banging around on the other side of a wall.

The yokai themselves are mostly well designed. Some translate better than others from classical illustration into 3D models, but the net perception is positive. Throughout the journey you’ll find hidden pages containing lore on each one and a more traditional illustration. They’re varied as well, making each one visually unique, even if gameplay usually amounts to just hiding and running. 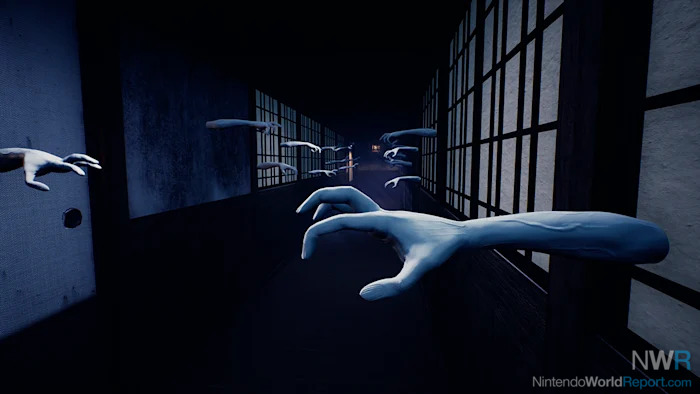 The story is told better through environments than spoken dialogue. All of Naoko’s lines are delivered with a level of deadpan obliviousness that causes some scenes to veer into borderline comedy. She comes off as being drugged or half asleep for most of her lines. That being said, the rest of the sound design is quite excellent. It is consistently unnerving with everything from subtle twig snaps to eerie cries from the dark. It’s an effective soundscape, especially with headphones. At least, that is, so long as Naoko herself isn’t ruining the mood.

Despite a few faults, I’d generally consider Ikai on the better end of linear horror games like this, largely thanks to its excellent atmosphere. However, the Switch version really doesn’t deliver on the underlying design. The resolution is extremely low and the image is always muddy regardless of whether you’re playing docked or handheld. Frame rate, likewise, always hangs very low. The combination of these two issues makes exploring the world a real chore. If you’re sensitive to frame rates, especially in first-person games, this is one of those that will likely leave you with a headache after extended play sessions.

This leaves me with what I feel is a very different impression of Ikai than I’d have playing it on other platforms. Poor resolution and performance make moving through the world an annoyance. And unfortunately that’s the entire gameplay loop. Even just catching a glimpse of an enemy can be hard from far away given the resolution, and effectively navigating the halls of the shrine to escape is much more difficult at twenty frames per second. So while I could forgive some of the more repetitive encounters and lackluster voice acting, everything compounds into a very unimpressive showing. This isn’t necessarily a bad game, but I’d strongly suggest playing it elsewhere if possible.