Infernax is developed by Berzerk Studios, makers of Just Shapes & Beats. Aside from the stiff challenge, the two games are incredibly different, but both show a love for simple but satisfying gameplay. There’s no getting around the fact that Infernax feels like a bloody love letter to Zelda II: The Adventure of Link: from the towns and townsfolk, to the single-weapon combat and overall progression, this is a place much darker than Hyrule. The land of Upel is also filled with many more secrets and even interesting choices to make along the way. After rolling credits, I immediately wanted to jump back in to see what I may have missed, and I’m just about ready to start another playthrough. Infernax has thoroughly infected my mind with its retro-styled charm.

As knight Alcedor, you return to a duchy that has been overrun by scores of demons, undead, and monsters. After trying out the basic jump and mace swing attack, you come across the first decision of the game, in all its stylized glory: kill a man who’s begging you to end his suffering, or stay your hand and watch the man transform into a grotesque abomination. While not littered with moments such as these, there are enough of these events to really make them standout, with not every decision needing to be made on the spot. After arriving in the village of Darsov, you repel another demon boss, and after tracking it down and finishing it off, you’re given the game’s ultimate mission: seek out five castles, defeat the foes within, and smash the gem stones in their possession to unlock the door of the final fortress.

Each castle leads up to a major battle, but it’s actually traipsing through the earlier rooms that can present the most danger. Basic enemies can really lay into your health meter, especially early on before you’ve upgraded your armor and life stat. Worse than that is the number of lava and spike-filled pits that spell instant death. Initially, you have no extra lives at all, and so a game over brings you back to your last save point. On the default difficulty setting, Classic Mode, you also lose all of the progress made up to that point, including experience points earned and gold collected. Fortunately, there is a less punishing option, but once you go that route you can’t return to Classic. You can upgrade your extra lives permanently by purchasing hearts from the Wizard’s shop in each town, but doing so isn’t cheap. Early on, I found myself making progress in a castle and then backtracking outside to the nearby save point so that I could save and not lose my hard-earned gains. Within every castle you’ll find a new magic scroll or ability, like an upward thrust that acts like a second jump or a lightning spell to clear the screen of weaker foes. Some of the later castles will really test your platforming aptitude, and your patience. I can’t stress enough how helpful it is to snag those extra life upgrades as soon as you can.

In addition to about four new skills you earn over the course of the game, which generally bestow a new method of traversal, there are seven magic spells you can either find or purchase in town. Some of the spells can even be upgraded to provide a stronger effect. While Alcedor never uses anything other than his trusty mace, you can purchase upgrades from the blacksmith to make it more deadly. Given the lack of new weapons, combat can feel a little repetitive, but Infernax never overstays its welcome, coming in at about 5-6 hours in length (longer if you want to discover all of its secrets). The map isn’t all that large, either, so you’ll almost always know where to go with your newfound skills or be able to find a hint for your next destination from someone in town.

From minute to minute, you never really know what you’re going to find around every corner. As you make your way across the map, sidequests pop up that can reward you with gold and other treasures. Completing them can lead to new buildings being erected, or some even being destroyed. Until you reach the final castle, the world really does feel alive and dynamic; decisions carry genuine consequences, and it’s hard not to wonder about every single one after you’ve made your choice. Without a doubt, Infernax encourages multiple playthroughs, and there are certain elements I won’t spoil that can really speed up your second tour of Upel, including some accessibility options available right from the start of the game to ease in players who want a lighter experience. One thing that can’t be adjusted is the level of blood, and a warning message before the game’s start screen makes it clear that it’s not for children or the faint of heart. If you’re okay with fat, eyeball-filled demons exploding in an outpouring of pixelated blood and guts, then it’s por favor, Alcedor for you. 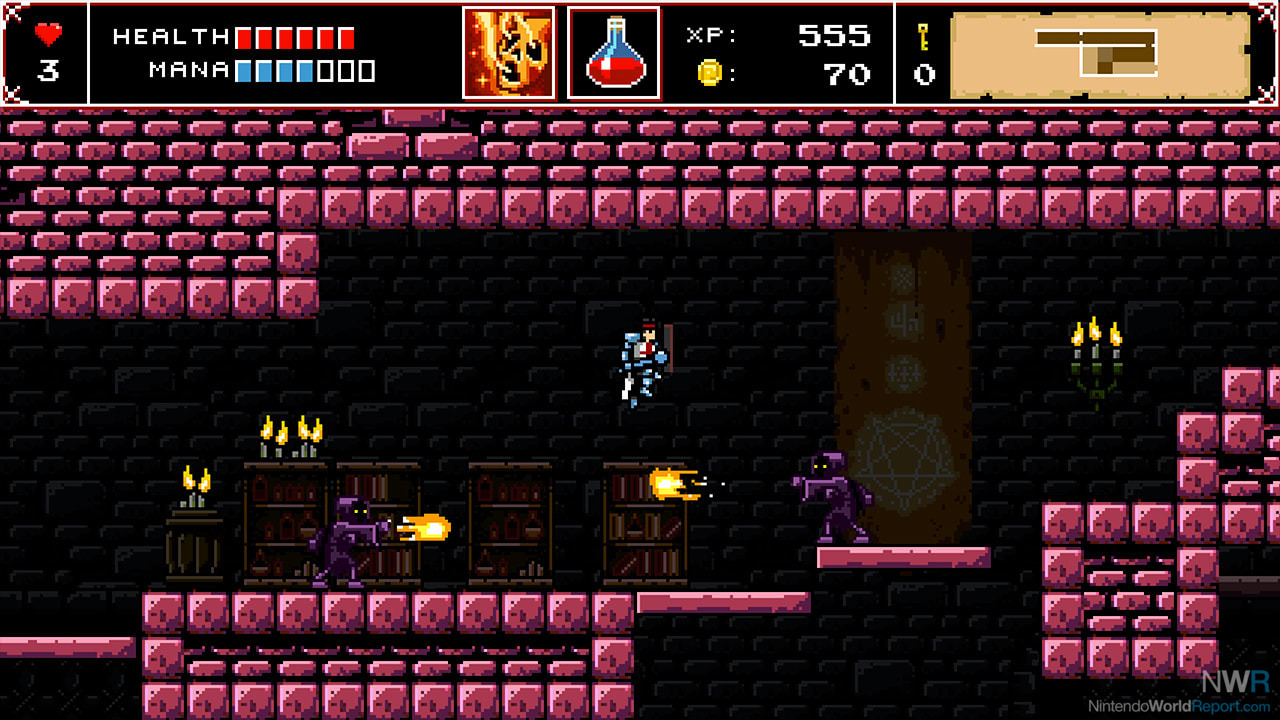 In terms of visuals and sound, Infernax drips with 8-bit charm. From the fonts used to some of the music tracks, it reminds me a lot of Shovel Knight, but with that game’s humor replaced with a much darker tone. The sound effects, night-time music, and dungeon music are very much in the classic Castlevania vein, so fans of those games—Simon’s Quest, in particular—will also find a lot to love here. Even though I’m a sucker for games in this style, the gameplay and world of Infernax are really what make it stand out.

After spending time with two demos of the game, I’m thrilled that Infernax has lived up to the hype. It’s an incredible throwback to classic action-adventure games that showcases all of the lessons learned in the 30 years since those titles first released. From the map and menu screens, to the solid feel of Alcedor’s jump and mace swing, playing this game is an absolute joy. Its story sticks around long enough to keep you engaged, but this world leaves plenty to be explored and discovered after slaying the final boss. While some of the mid and late-game platforming challenges are pretty demanding, failing and having to make your way through familiar parts of the castles never takes too long. That said, I do wish the bosses put up a bit more of a fight; upgrading my stats and equipment at a regular clip allowed me to make short work of each one. As sure as the sun rises and sets (and wait until you see that in game), the Switch eShop will receive more and more titles hoping to cash in on NES-fueled nostalgia; don’t let that stop you from picking up the immensely satisfying throwback that is Infernax. Even though my mace and armor are dripping with demonic ichor, I’m still ready to charge back in.