I underestimated Kirby and the Forgotten Land. When the game was first announced a few months ago, I wasn’t confident that the shift to 3D would fit with the laid back approach that the Kirby series prefers, and I worried that the result would be a game that failed to find the balance between simplicity and precision. I’m happy to say that I was completely wrong about this; Kirby and the Forgotten Land has managed to stick the landing in almost every regard, easily finding its place among the greatest adventures Kirby has ever been on.

The game opens with a rift in space appearing over Planet Popstar, pulling Kirby and the Waddle Dees into a new land filled with the ruins of a once-great civilization. A seemingly post-apocalyptic Earth (or at least some planet that greatly resembles Earth) is the main setting this time around, and Forgotten Land builds its beautiful locales out of familiar sights and scenes from our own world that have been slowly reclaimed by nature. From a sprawling city to a coastal oil rig, and then all the way to an abandoned amusement park, Kirby’s journey through the Forgotten Land brings him to plenty of new areas that are more dense and gorgeous than anything the series has seen before.

Gameplay takes place in linear levels that take advantage of the setting to create puzzles and challenges that have a sense of place. If you wanted to, you could easily take a stroll through each level to just see the sights and fight a few monsters to reach the ending without much struggle, but you’ll be rewarded if you take some time to stop and smell the roses. Captured Waddle Dees hidden in every stage can be found by players who choose to go off the beaten path. To find them all, you’ll need to pay attention to your surroundings and look for clues in the level design and environment that will lead you to hidden areas.

In addition to the hidden Waddle Dees, each level also has a few bonus missions that can be completed. The bonus missions are often simple things that involve solving puzzles or interacting with unique features of the world. One of them even literally has you stop and smell the roses. These objectives are kept secret on your first playthrough of a level, though they can all be completed immediately, with any you don’t manage to discover being slowly revealed one by one if you play the level again. This drip feed of information helps to serve all kinds of players; if you’d prefer to find the bonus objectives yourself without any help then there is nothing stopping you from doing that, and if you need a little help discovering them the answers will be given to you simply by playing the game.

Outside the regular missions you’ll also find challenges called Treasure Roads. These are speedrun challenges that task the player with completing a stage built around a certain copy ability or power-up within a strict time limit. Treasure Roads are totally optional, but they reward you with materials that allow you to unlock upgrades to Kirby’s copy abilities that change the way they’re used. If you really want a difficult challenge you can even go for the optional target time that requires complete mastery of the level to complete. The challenging Treasure Roads and clever secrets and bonus missions of the main stages add a lot of video game-y goodness that keeps Forgotten Land engaging even for players that may not be looking for the relaxed vibe Kirby is known for.

That’s not to say that Kirby and the Forgotten Land has no relaxed vibe, though, since all of this feeds back into the Waddle Dee Town, a settlement being built up by the Waddle Dees that you rescue in each level. The town features shops and minigames that are unlocked as you rescue more and more Waddle Dees hidden throughout the world. By the end of the game, the town is a bustling community where you can shop for power-ups, work a part-time food service job, relax at a fishing hole, test your skills at a colosseum, upgrade your copy abilities at a blacksmith, and finally call it a night and go to sleep at Kirby’s very own house. Watching the town slowly expand and grow a community over the course of your adventure provides a comfy and cozy charm that makes the game’s challenges feel truly rewarding.

If there is one big disappointment I have with Kirby and the Forgotten Land, it’s how limited the range of Kirby’s copy abilities is this time around. There are only twelve abilities in total, and that counts the one-time-use Crash and relatively useless Sleep. The two new abilities⁠—Ranger and Drill⁠—are excellent, but the lack of series mainstays like Stone, Fighter, and Plasma can be disappointing. There are some attempts to mitigate this problem such as weapon upgrades totally changing their function and the visibly horrifying Mouthful Mode completely changing Kirby’s moveset. However, those upgrades are total replacements for the 12 core copy abilities, and Mouthful Mode is limited to select predetermined sections in each level, meaning most of the time you’ll be left choosing from a relatively limited pool of abilities. This is understandable given the massive shift in the series’ gameplay that comes with a 3D game, but it nevertheless leaves me with the sense that something is missing. 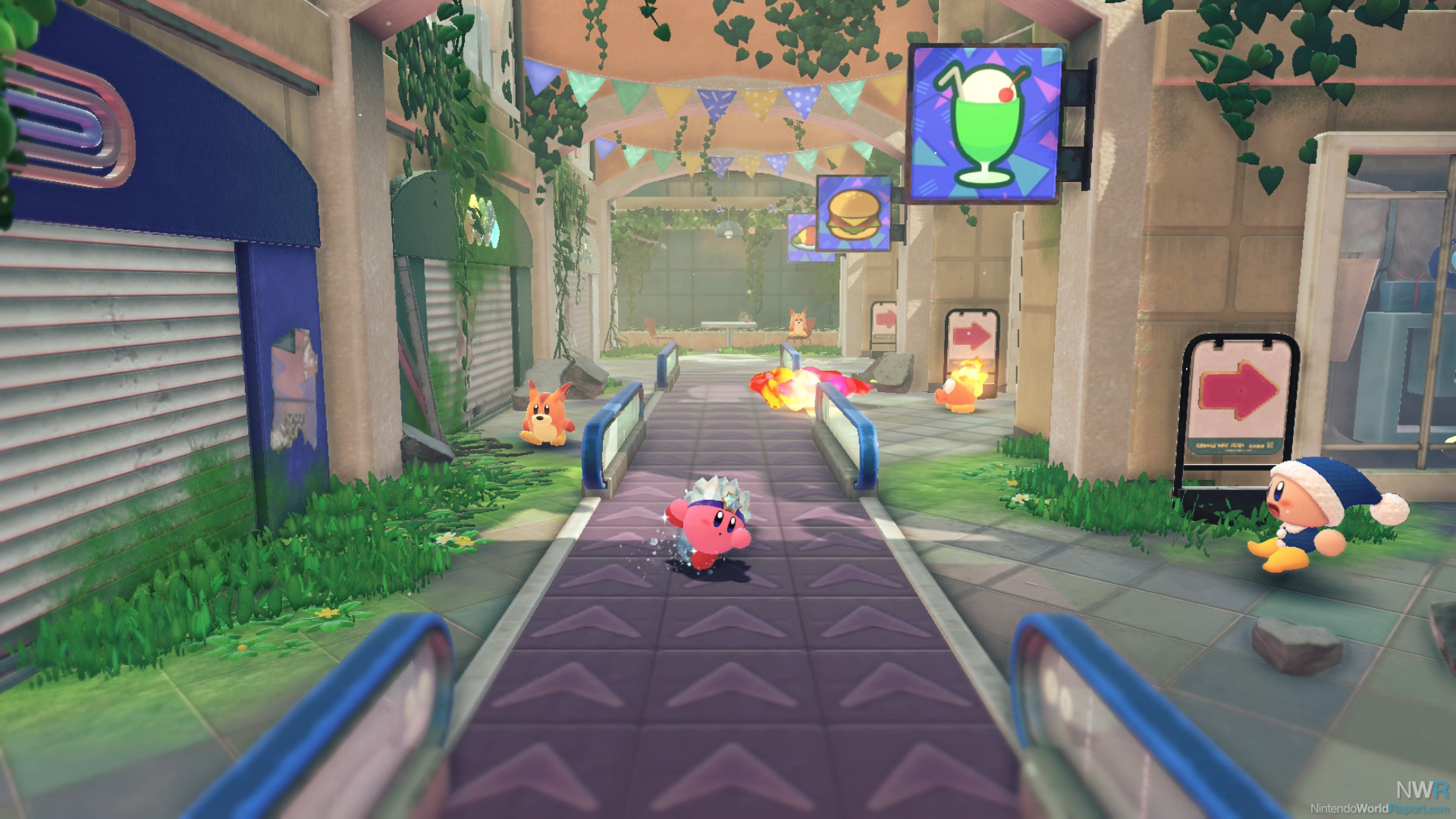 Aesthetically, this game is absolutely breathtaking on all fronts. The soundtrack is full of absolute bangers, many of which feature a leitmotif from the game’s main theme. Personally I love when games make good use of leitmotifs, but if you’re not a fan of too much repetition, don’t worry. There are plenty of unique melodies all over the soundtrack with a healthy mix of both brand new songs and classic tunes from Kirby’s history. The graphics are indeed fantastic, with a great emphasis being placed on excellent animation. Kirby is cuter than he has ever been before, with a wide range of actions and poses that are as heartwarming as they are expressive.

This is more of a personal anecdote, but I tend not to like games that strive for an atmosphere that’s “wholesome” or “cute” because they have a level of artifice that I struggle to relate to. This is a feeling that I never had while playing Forgotten Land, and moments as simple as Kirby turning around and waving to the camera behind him with a warm smile on his face were so emotionally resonant to me that they literally brought me to tears. I don’t quite know how to explain what it is that makes this game in particular feel so earnest and genuine; perhaps it’s the game’s confident commitment to its tone without an ounce of irony or self-consciousness. Whatever it is, this quality makes Forgotten Land one of the most genuinely feel-good games I have ever played.

Kirby and the Forgotten Land is far better than I could have imagined. Its ruined yet beautiful world carries a tone of wonder and amazement throughout the entire game, and HAL Laboratory undoubtedly stuck the landing while transitioning the series’ gameplay into 3D. Though I am disappointed in the small number of copy abilities, the game’s issues are mere bumps in the road compared to its many triumphs. It is the only game I can think of to make me cry from the sheer joy of how cute and heartwarming it can be, and it is in my opinion the best game Kirby’s name has ever been on.