Stop for a second and think about it. What were all the new or old hobbies you decided to take up during the COVID-19 pandemic? Was knitting finally back in action? Did you finish that backlog of games like you always wanted? Or did you decide to pursue further education or learn a new skill? Whatever you’re imagining, I can tell you that you’ve probably spent most of that time more wisely than I have, because I fell into the deep dark void that is board game collecting. Over the last two years, I’ve been going on a bit of a rampage collecting all sorts of board games: from long two-player epics like Star Wars: Rebellion to casual fun card games like Claim. Unfortunately, a pandemic is not the best time to start with collecting physical board games to play with multiple people. However, that did not stop me from backing board games on Kickstarter as well as learning about Oink Games. Oink is a very special board game company that specializes in smaller, group-focused board games. Their titles are not only well designed but come packaged in these lovely small boxes that contain all the components. While they aren’t necessarily expensive, their printing tends to be limited since the games are designed in Japan. Therefore, when they announced a digital collection of a selection of their titles with free future updates adding more games to the mix, I was immediately interested. Let’s Play Oink Games may just be even better than playing the actual board games themselves.

Let’s first quickly go over what is in this collection. At the time of this review, there are five playable titles in the game with more to follow over time. These titles are: A Fake Artist Goes to New York, Deep Sea Adventure, Moon Adventure, Startups, and Mr. Face. Each one is an entire unique game with its own set of rules and mechanics. Right off the bat, I immediately noticed the clean presentation. While the collection isn’t as polished as Nintendo’s own 51 Clubhouse Games, I did really like the combination of the visual presentation and physicality of the pieces. Even in the selection-menu all the games are displayed like their boxes, with the accurate description and summary on the back of the box. Each game is accompanied by its own musical theme and design, such as Deep Sea Adventure’s aquatic ambient soundscape and the building pressure in Moon Adventure. There’s also a ton of character icons to choose from for your profile, and overall the game adds to the charm by allowing you to communicate with other players through emoji.

So what are the games themselves actually like? My personal favorites here are probably Moon Adventure and Startups. In Moon Adventure, you play cooperatively with the other players and try to gather supplies from the moon before oxygen for any player runs out. It is a very tense and exciting game that really puts communication and teamwork at the forefront of the experience. Panicking as your oxygen supply runs out and the oxygen supply depots get destroyed due to bad luck never ceases to be a true ‘oh crap’ moment when played with a group. On the opposite end of that is Startups: a game that sees you bidding on companies, while trying to gain a majority monopoly and having the players that don’t have the majority paying up the difference. It’s fast-paced, always feels balanced, and can shift suddenly when it becomes a staredown between two players betting for the majority. 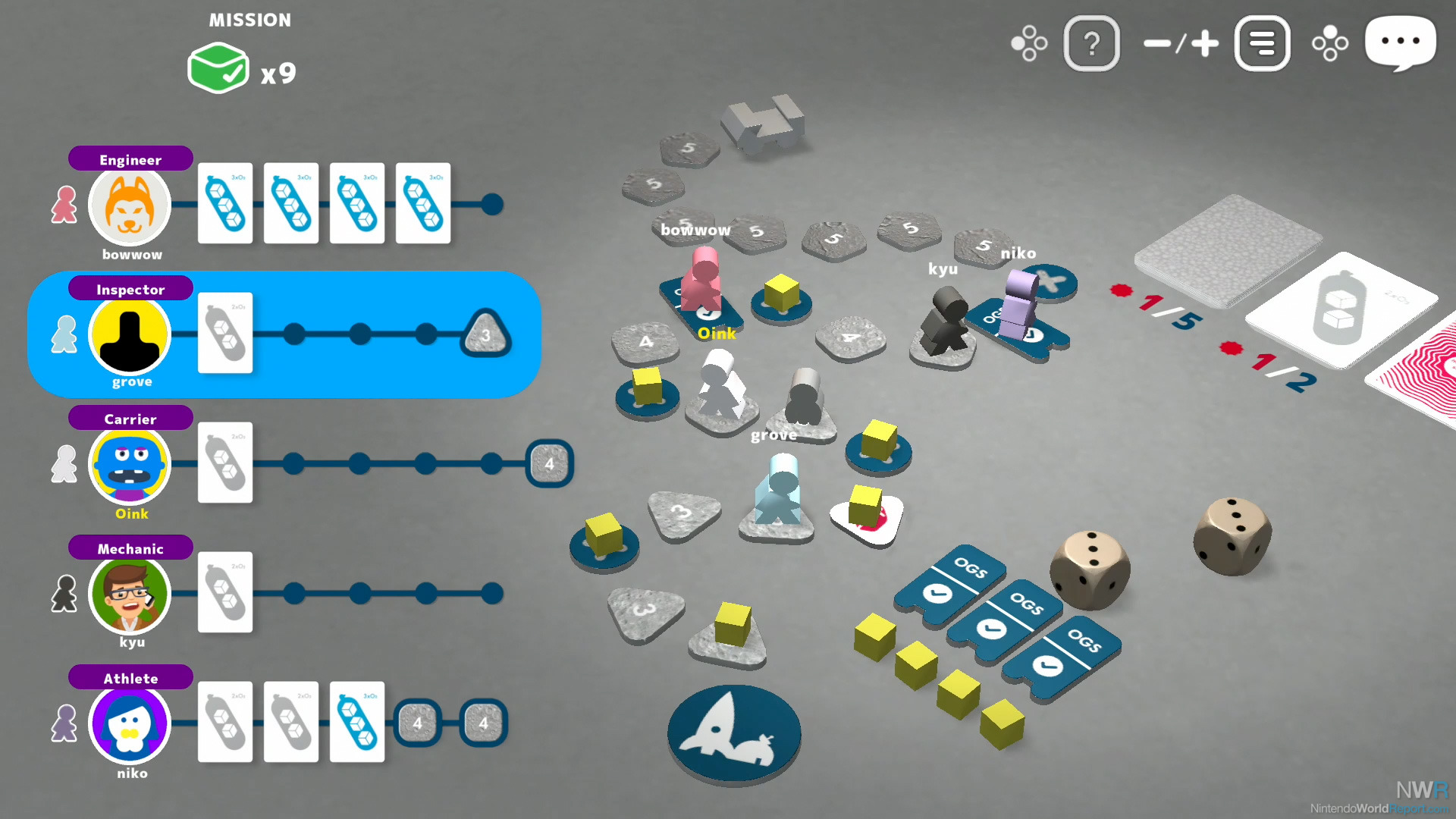 That’s not to say that the remaining games aren’t fun on their own. Deep Sea Adventure works on a similar premise to Moon Adventure but is more competitive. Players dive to the bottom of the ocean and have to spend oxygen to get themselves and their collected loot back into the submarine. This is much more akin to a gambling game, where the tension is between picking the right moment to return or drowning because another player went back after collecting only a single piece of treasure. Thankfully there’s also a few creative titles in here. A Fake Artist Goes to New York and Mr. Face both feel very similar to games you could find in a Jackbox Party Pack. In A Fake Artist, each player has to draw the same prompt with a single stroke of their brush. The twist is that one of the players does not know the prompt and has to pretend to know what they’re drawing. It becomes a fun game where all the players are second-guessing their friends as to who could be the fake artist. Thanks to a clever rule, the fake artist still has the chance to win when there’s a tie, by guessing what the actual prompt was. Mr. Face has each player arranging pieces of a face in order to portray a specific facial expression and the other players have to guess what the corresponding card is. 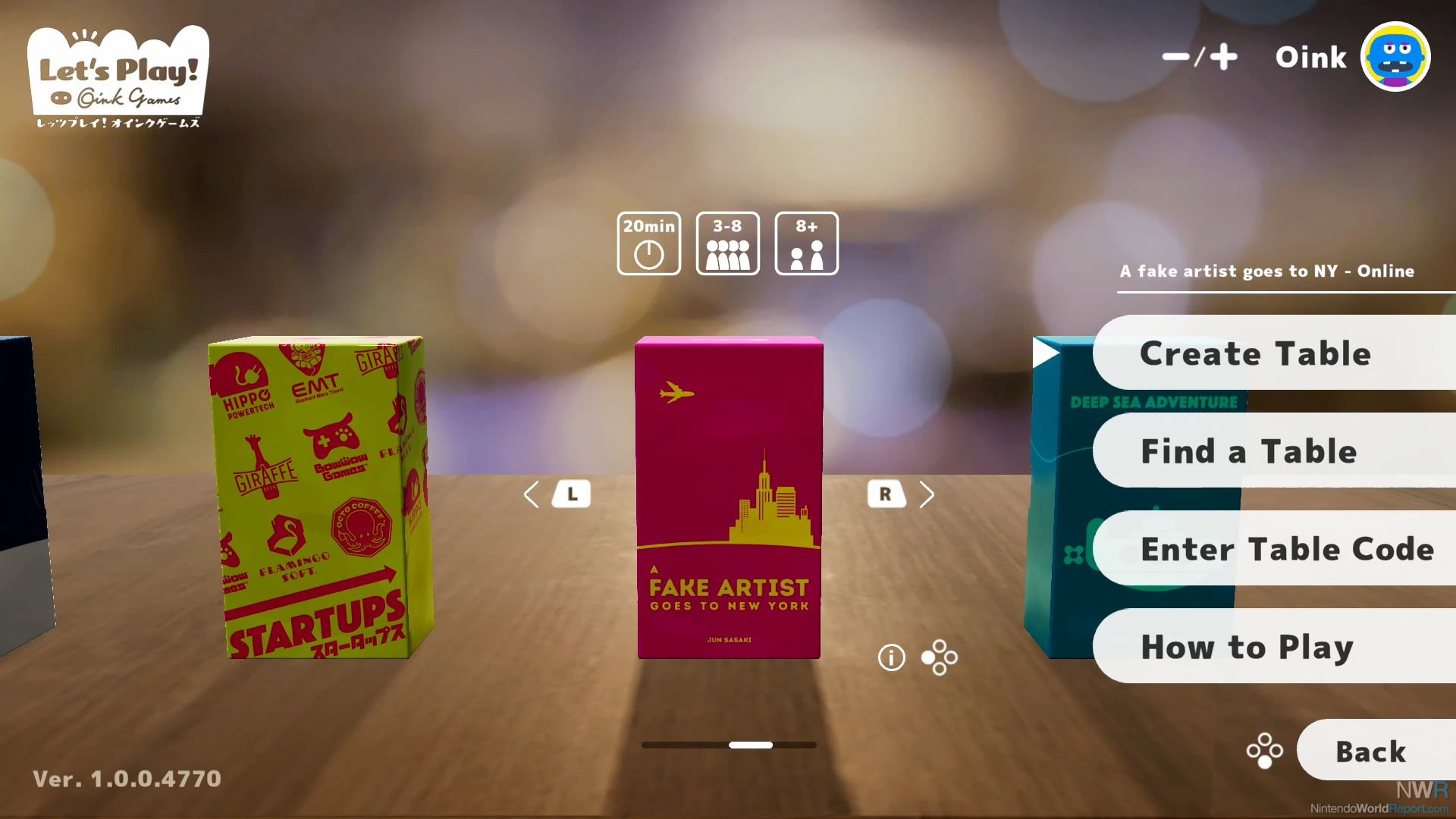 Now that’s quite a bit of game for your money, and what’s great about Let’s Play Oink Games is that all the games support both local and online play. Though in my experience online play has definitely been the way to go. See, certain games aren’t compatible with local play due to their nature and mechanics. Startups, for example, can only be played online or with your own Switch screen, due to the fact that each player needs to draw a hand that’s secret from the others. Likewise, A Fake Artist actually asks local players to close their eyes one at a time, before deciding who will be the fake artist. While I trust my friends to actually do that, it does feel like not every game has made that perfect transition to a digital board game. Though I should say that playing a game like A Fake Artist Goes to New York online is a much more streamlined experience than the actual physical board game. When played in real life, it requires one player to remain neutral and that player divides the roles between fake artist and the other players. So you do gain one additional player by playing this digital version of Oink Games. That also adds to the value argument. Most Oink Games cost between 20 and 25 dollars due to their limited printing and high import costs from Japan. With this digital version you have a great way to get familiar with these games, without immediately having to spend a lot on each one. That said, I should add that ever since getting into Let’s Play Oink Games, I did buy nearly all of the games in this collection for my own personal board game nights. Some things never change I suppose. 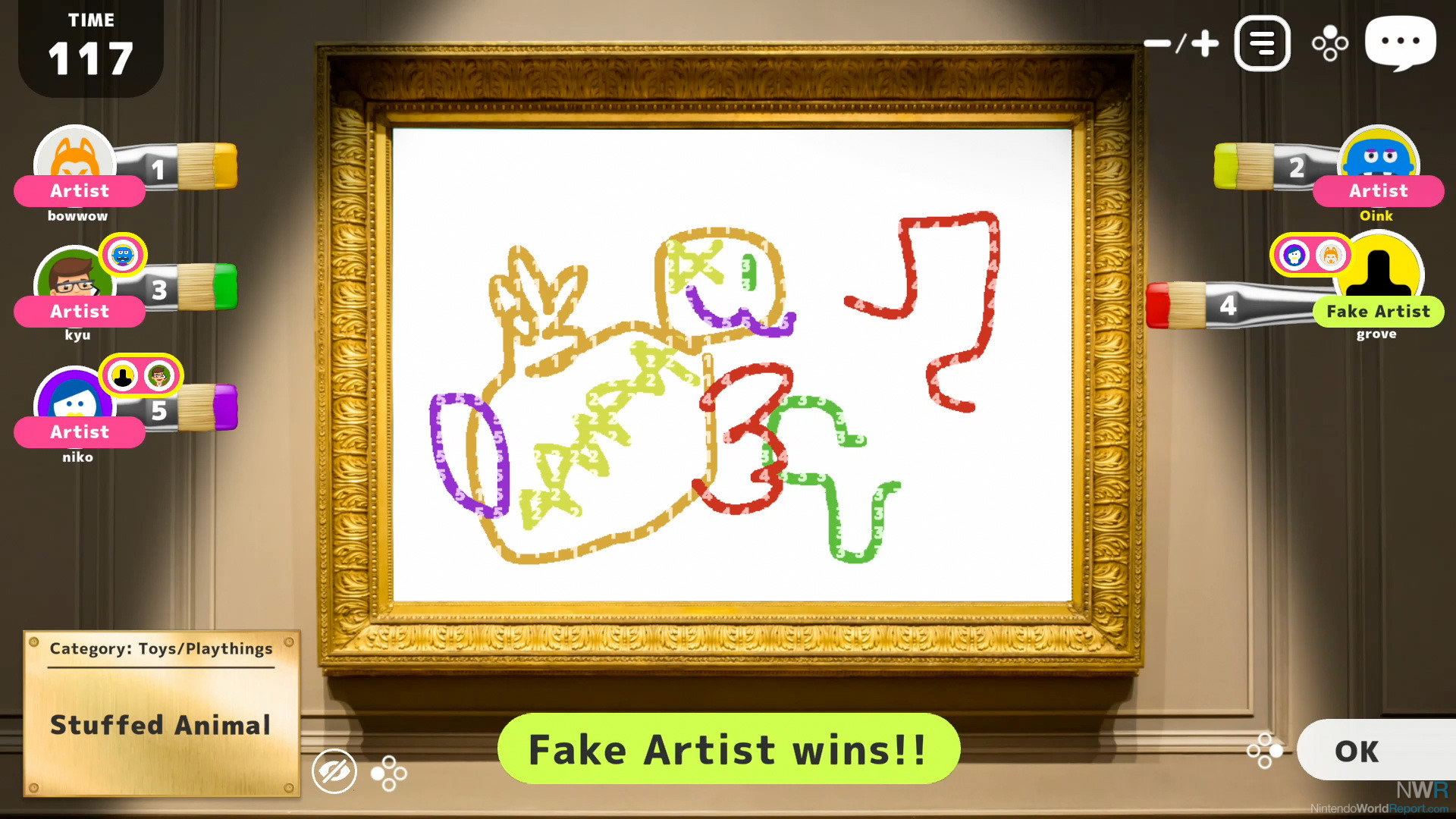 The final downside is that so far the online servers haven’t been as active as I’ve wanted them to be. It’s not too surprising, since this isn’t as high profile a digital board game as say Wingspan or even 51 Clubhouse Games. But finding a table to join and getting the random players involved ready to start the game didn’t go as smoothly as I was hoping. Thankfully, I got friends together and we played for nearly three hours and tried each one of the games. One of them despises board games but even he came around and wanted to play more of Mr. Face, Startups and Fake Artist in the future. So if you can get multiple friends to buy in on this collection, you’ll almost certainly have a great time with it. If you’re by yourself however be cautious that the fun could take a while to find online. 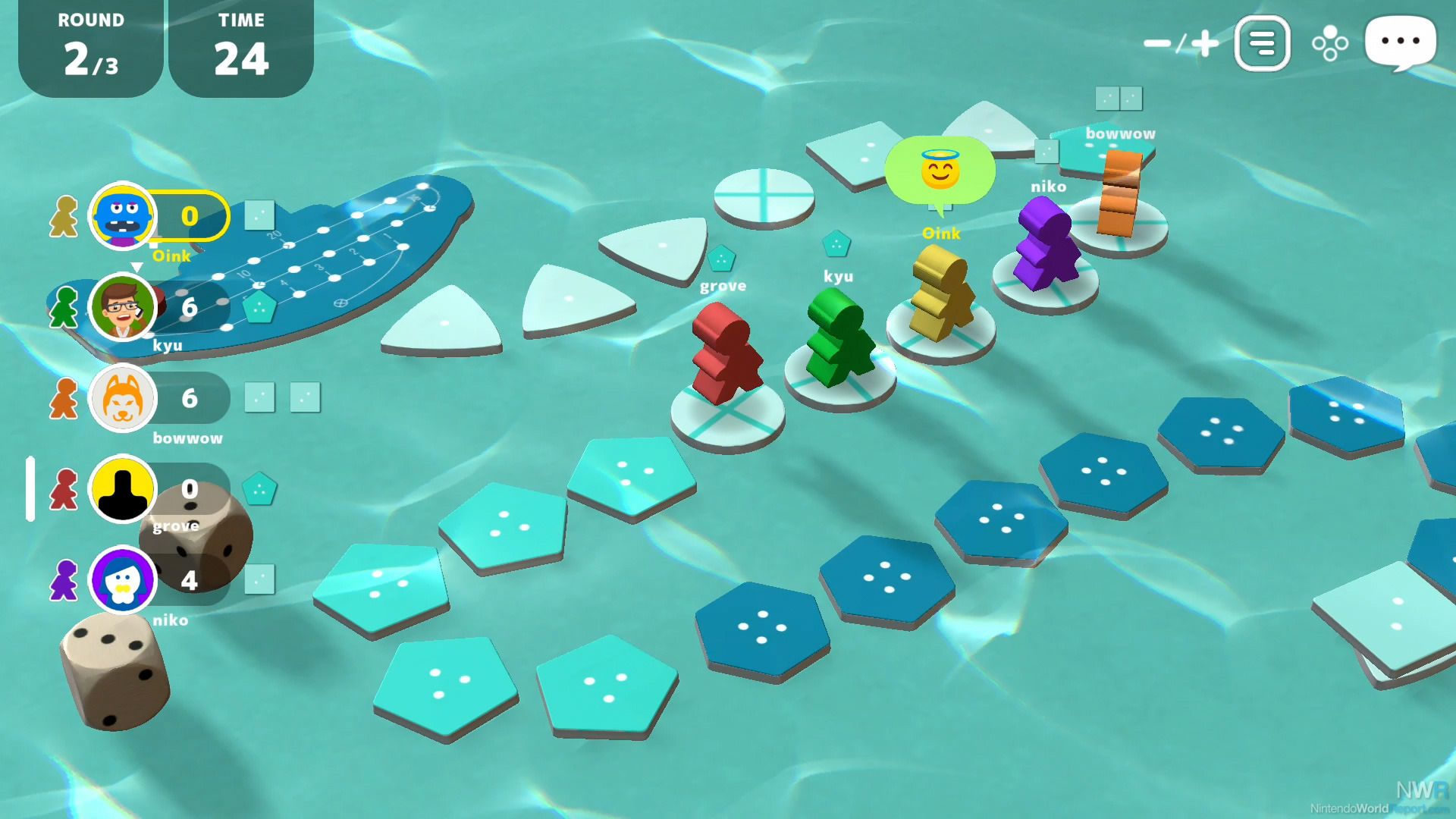 Let’s Play Oink Games is an incredible value for money. Each game in this collection is very well designed. While not each one is great for every situation, especially with local play for titles like Startups and Mr. Face, every game is completely different from the other. And heck, the game will be supported with free updates over time that add even more games to this collection. I’m hoping that titles like Nine Tiles Panic, Insider, Hey Yo, Modern Arts, and Troika will be added eventually. Oink Games makes some of the most fun board games you can buy and by having them this accessible, I’m certain I’m going to be playing them for years to come.