The second FuRyu RPG I had in five months, Monark attracted a lot of attention at its launch mostly for its pedigree with its lead writers being known for the original Shin Megami Tensei games. Although it’s not trying to be a throwback to the Super Famicom days, frustrating puzzles and imbalanced party composition make it feel like a game I wouldn’t have beaten until GameFAQs blew up.

It’s common for JRPGs to be set largely in a high school, but Monark takes it to the illogical extreme by being entirely set in the fictional Shin Mikado Academy. A supernatural force has put an impenetrable barrier around the school, trapping all inside, and seven daemons (game spelling) have formed pacts with individuals based on the Seven Deadly Sins which manifest as a mist that drives those who enter it insane. The player character – self-named despite having a canonical sister, which the game handwaves as being due to divorce – himself forms a pact with a daemon centred around vanity who talks predominantly in rhyme, and has to destroy the “ideals” of the other “Pactbearers” in order to free the school. There will be times when it’s necessary to team up with a Pactbearer, which causes some interesting tension in the party, but otherwise the party is made up of the PC, one partner, and a few automatons.

Don’t talk to me or my sister (from a different mother) ever again.

The battle system is similar to the one used in The Caligula Effect games from the same developer, with the major difference being that almost all optional encounters are on-demand or can be made that way. Battles take place in an “Otherworld” with your party facing a mob of up to eight enemies, and after moving in a fixed area commands are chosen if there is an enemy in range. Super moves can be used by maxing an “AWAKE” meter, while attacks either drop the user’s HP or increase a “Madness” meter that screws with the interface and, if maxed out, makes them attack indiscriminately. Random encounters are possible, but come in the form of “Death Calls” that should only be taken by insane people. I accidentally triggered one and was staring down a fight at nine stars of difficulty (the max is 10) with enemies pushing five digit HP counts when I just cleared 100. Not since hitting level 70 Tyrants in Xenoblade X have I noped out of a fight that hard. Thankfully, your daemon will offer a fight with a simple objective that can stop the Death Calls entirely. Other grinding fights can be found by solving puzzles in the environment and obtaining phone numbers that can be dialed for experience; these fights do get harder with repetition, so it’ll be necessary to spread your leveling out a lot.

A lot of the focus of the game is clearing the mist out of various parts of the school, and this is where a lot of my frustration with the game comes from. There were at least three different puzzles that I had to check with colleagues to figure out how to get through, and I would frequently end sessions out of frustration only to figure it out after a night’s sleep; before the review, I was stuck on a fourth. The mists also slowly increase the madness meter, so having a time limit just made things worse. Maybe I’m losing a few miles an hour off my mental fastball in my old age, but it should not be this frequent. 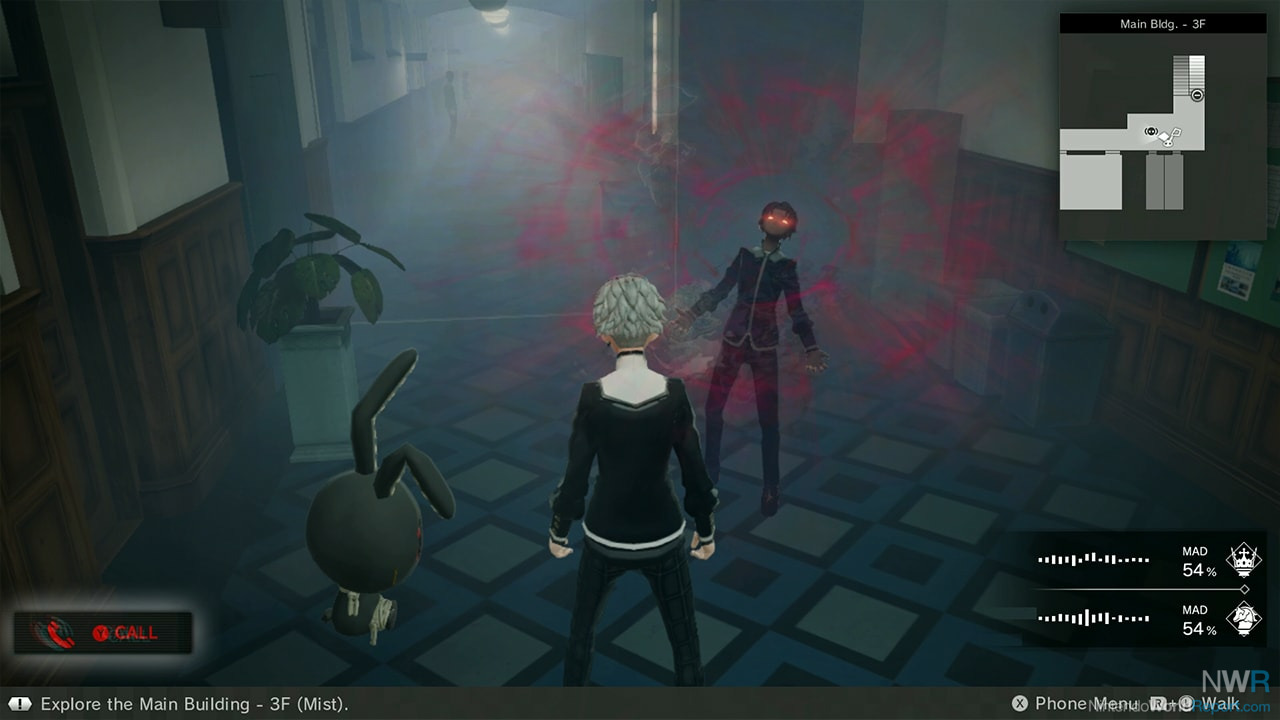 Between Death Calls and spam, it’s no wonder I only answer my phone at work or gunpoint.

The other source of my frustration came in the character progression. Only having one partner at a time with levels still increasing – having to level them up to complete story fights – caused a major imbalance in character levels when I hit the point when I had a character choice. I had four potential partners and their levels were 7, 9, 17, and 24. Gee, I *wonder* who I’m taking to the next part of the school? The leveling system is neat, at least: winning battles doesn’t award experience directly, but does award the game’s currency (“Spirit”) that is used to unlock or power up nodes on character skill trees. Each time a node is upgraded or unlocked, that’s a level. More spirit is awarded based on battle performance, though some of the turn requirements for this are comical. Sure, I can beat seven enemies on one map with more HP than me in three turns. The automatons can be grown by getting equipment drops as well as unlocking their own skills, and there’s a customization system beyond that so they don’t look like skeletons.

I found Shin Mikado Academy to be a boring place after a while – sure, the Otherworlds look neat, but you can only do so much with a single high school especially when each building has to be entered at least three times in order to clear out everything. There was also a weird graphical glitch when I was about to enter an area surrounded by vegetation: the screen went entirely green for a few lines. Aside from the main character every character in cutscenes is voiced (English only in the review copy) and the work is pretty good, but there’s not a lot of memorable music.

If I’m not having fun with an RPG I’ve noticed lately that I have to force myself to play it. Monark started strong but my opinion of it dropped rapidly every time I spent an hour checking everything I had unlocked in the school; I had to be missing SOMETHING that would get me to proceed, right? If you’re feeling sharp and are okay with little to no environmental variety then Monark might be worth a look – there’s a demo for it – but it’s nowhere near the best RPG from this developer in the last six months.

Call of Duty: Vanguard’s MVP voting system gives me a reason to stick around after a match

Marvel’s Guardians of the Galaxy review