When Wii Sports launched back in 2006, the joy of all five sports was immediate. Picking up a Wii Remote and swinging it like a tennis racket or mimicking a bowling motion was natural and downright enchanting. There was nothing like it. Focused on personal high score chasing and local multiplayer, Wii Sports was a revolution.

Flash forward 16 years and after nearly a decade of dormancy, Wii Sports is back in the form of Nintendo Switch Sports. In the interim, motion controls were milked to death and nearly killed as the Wii name faded away. Nintendo Switch Sports appears to continue Nintendo’s Switch-era trend of repurposing popular Wii concepts as fresh titles, a la Ring Fit Adventure to Wii Fit. In terms of immediacy, Switch Sports sticks the landing. Bowling, tennis, and chambara are all just as easy to pick up as they were in the Wii era, and the three new sports (soccer, volleyball, and badminton) are all accessible and varying degrees of fun. With the Joy-Con and motion controls, the sports play wonderfully well. It’s just that Switch Sports is essentially an online game now.

That makes it tough to review before launch because, as of this writing, the online portion of Switch Sports isn’t accessible to reviewers. To that end, this won’t be a full review. We’re going to hold out until we get time with the online portion to see what’s all there because that’s where unlockables are found, where equipment is earned, and where you can enter Pro Leagues. That’s where the points matter. That’s the only place any kind of meaningful progression is. In fact, that’s where the overwhelming majority of Switch Sports is.

Switch Sports is, for better or worse, a heavily online experience. This is not the local multiplayer wunderkind that its predecessor was, although it’s still fun slapping around balls and shuttlecocks in the same room as a friend. New tweaks, such as bowling happening simultaneously, vastly improve the local play. But if you want more than the stock character clothing or more than the default equipment for each sport, you have to venture online. You can still play all the sports with somewhere between one and four players, but there’s a good chance that there are entire modes (like Survival Bowling shown in previous videos) that are strictly online. I’m looking forward to playing it online and expect to play a bunch when the time comes. That time is not for this review-in-progress.

From raucous single-player and local multiplayer matches, I am enthralled by the suite of sports available so far. Bowling is still the undisputed king in my eyes, with the Joy-Con doing a good job of replicating the feel of the Wii Remote. The trick lane mode where every frame has unique obstacles is one of the few variants offline and makes for an amusingly chaotic experience as some lanes are borderline impossible. Tennis is fine, though I found myself more amused with what amounts to a Tennis variant in Badminton. The latter almost feels like Table Tennis from Wii Sports Resort, but with a different enough spin to stand out from the familiar Tennis. Tennis also benefits from being playable for four players whereas Badminton caps at two. Chambara, or swordfighting to the Wii Sports Resort player, is enjoyable and the three different sword types add a decent amount of strategy. 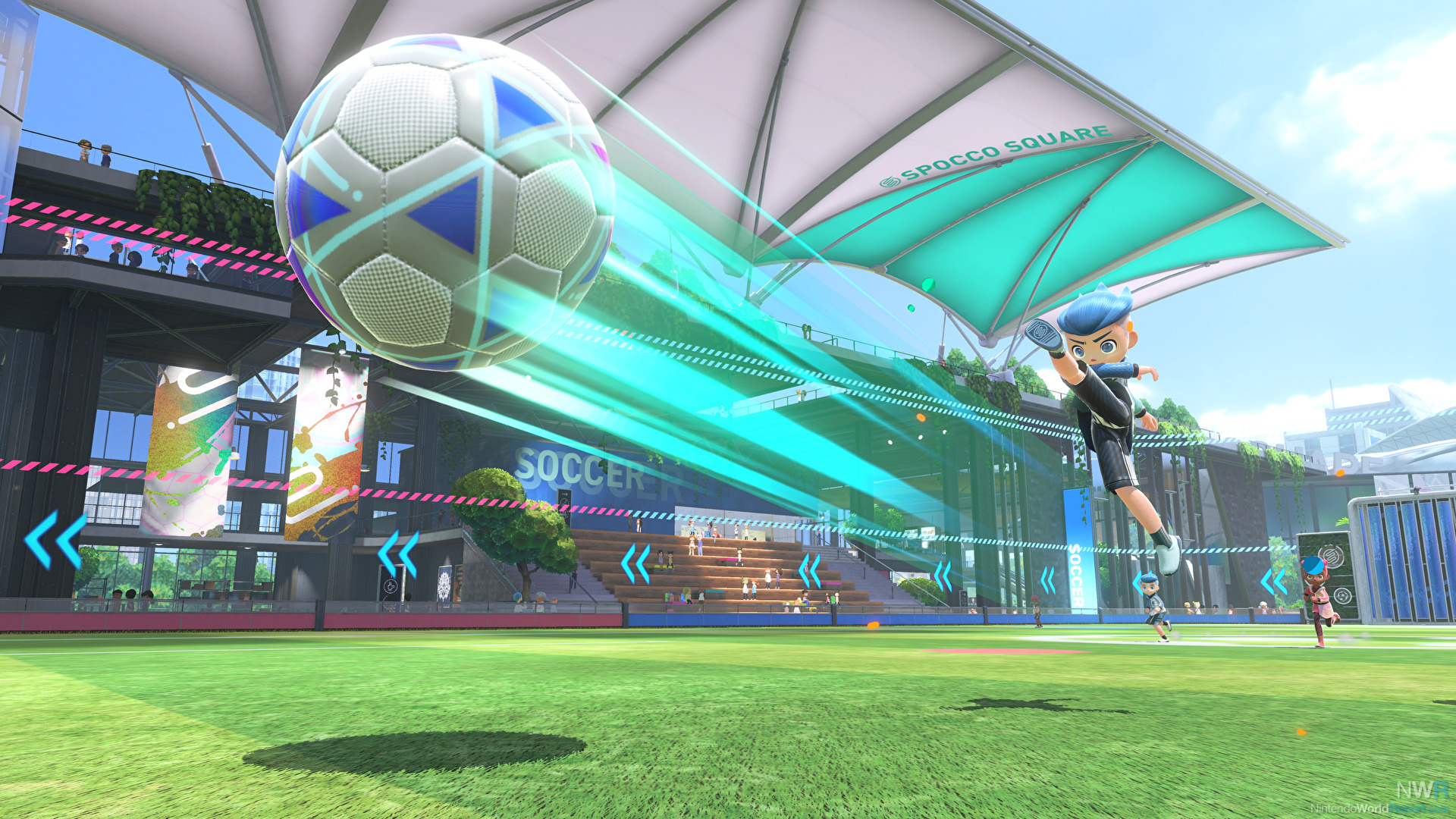 On two ends of the spectrum are the last two sports: Soccer and Volleyball. Soccer is electric – it’s essentially simplified Rocket League with motion controls. It’s one of the few that requires two Joy-Con to play as the left analog stick moves your player and the right is used to send out motion-controlled kicks. Soccer has the most vibrant amount of offline options as well, with one-on-one, four-on-four, and shootout. The head-to-head modes are short and tense timed affairs where you need to be aware of your teammates and opponents’ placement while also feathering a stamina meter to try to set up a shot on goal. The shootout mode is goofy, as you make use of the leg strap (available with the physical release of Switch Sports or Ring Fit Adventure) to time shots on goal. A future update will add leg strap functionality for the main game of soccer, which sounds like amazing chaos and also a decent workout. Nothing else in the games support the leg strap that we know of. 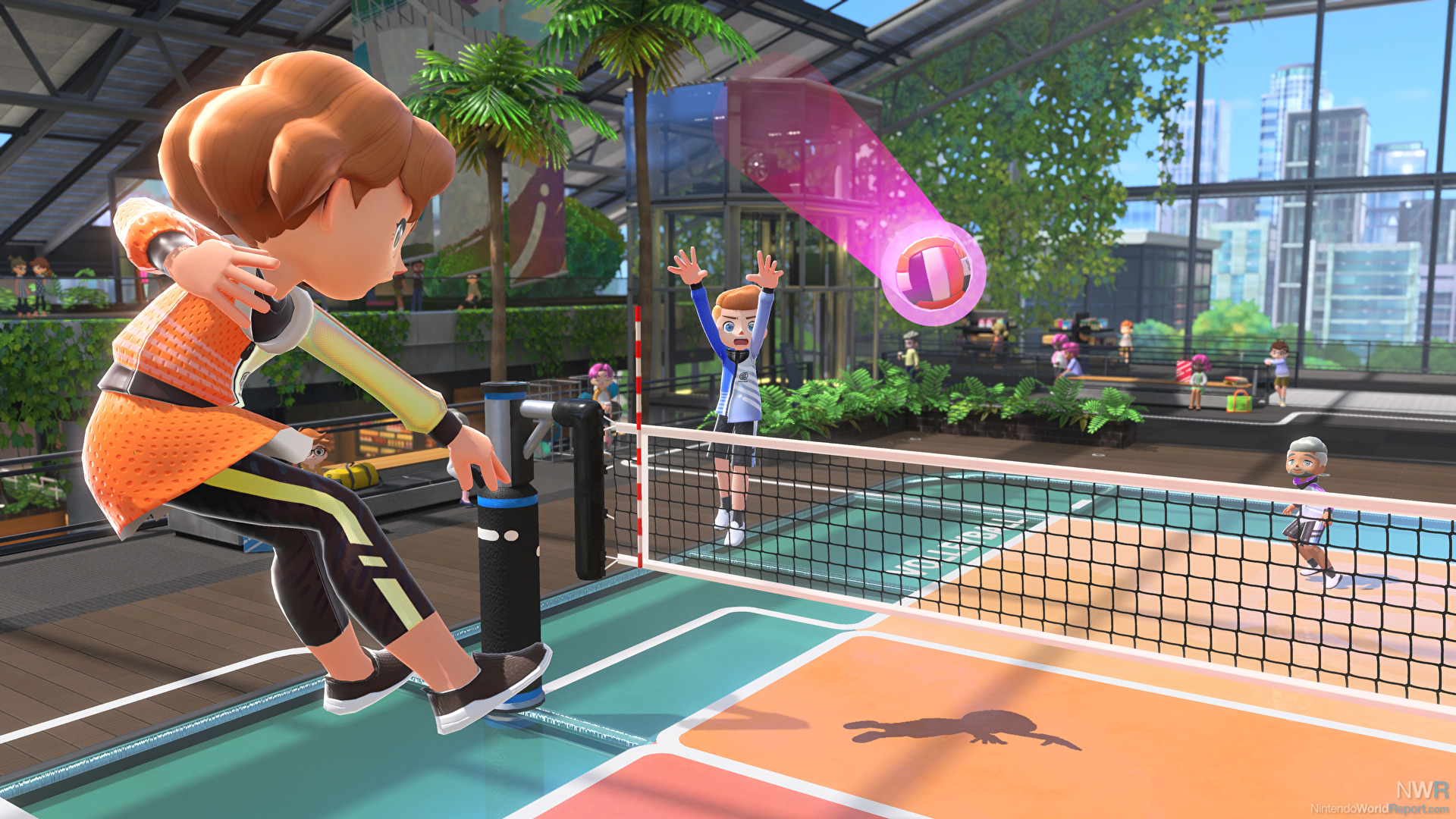 Volleyball, on the other hand, is the closest Switch Sports has to a dud. It’s a good representation of the sport in video game form, but it’s more rigid and structured. Playing Volleyball feels more like rehearsing a dance than playing a game. It’s always played in two-on-two and after a serve starts play, every side goes into a routine bump, set, and spike routine where you just need to time your Joy-Con swing up and/or down to move the game along. Adding more depth to the sport might have gone too far into making it more complex for the pick-up-and-play immediacy of Switch Sports, but the end result is still merely okay at best when compared to the other five on offer.

Switch Sports will be adding golf in a future update, so there will be more than the six sports available on launch day in the future. While the online could sway the eventual review score one way or the other, I’m extremely positive on Switch Sports and look forward to playing it more with friends and family locally as well hopping online and unlocking new gear and equipment and trying to join the Pro Leagues. We’ll be back soon with a final verdict on Nintendo Switch Sports.