Nobody Saves the World (Switch) Review

Drinkbox Studios has a pedigree in crafting zany, stylistic metroidvanias ever since their initial release of Guacamelee back in 2013. Since then, they have continued to hone their craft, creating new worlds and goofy but lovable characters to populate them. In their latest entry, Nobody Saves the World, they have done exactly that, bringing together a cartoonish Ren and Stimpy approach to their already well developed design prestige. Following the metroidvania formula but in a top down dungeon crawler experience.

In Nobody Saves the World, you are a mysterious “Nobody.” A blank page so to speak, with a completely white featureless character, complete with holes in his head instead of actual eyes. It’s kind of off putting to look at, honestly, but quickly you are given a wand that allows Nobody to transform into various forms and classes. These classes are what the game is centered around, and they’re both hilarious and inventive, each with its own set of special active/passive abilities plus status ailments for varying styles of play.

Nobody Saves the World starts with only two classes but after some time, it promptly opens up to many other options through quests that are presented during your world exploration. Each class starts with two quests and with completion you get experience to level up and automatically get more quests. The quests are simple and boil down to “kill blank number of enemies with this class ability,” which you will do naturally while exploring the world and its dungeons.

The classic knight class is what you’d expect, with a damage-inflicting sword and a passive ability to do more damage when at low health. Now contrast this with the Slug class, which leaves a trail of slime that slows enemies and the ability to shoot slime shots that strike critically against status affected enemies. There’s complexity to each class, and within a few hours you get the option to mix and match some of these traits with other classes to find your perfect combo.

With some trial and error, I had a ghost that passively inflicted fear AND poison in an area-of-effect range that also healed both my health and mana without having to attack. The combat in the early hours can be rote and repetitive, but it felt amazing to find a depth and complexity in my own customizations. Additionally, each of these options can be improved with easily obtained upgrade points to minimize mana cost and boost effectiveness. You can also swap classes on the fly with a radial menu allowing for swift adjustments. Soon you’ll find yourself making your own Horse class that poisons and slows enemies within its slime trail gallop. It gets real silly real quick.

Speaking of silly, the story rarely takes itself seriously. With a calamity looming, you are tasked with finding the wizard Nostramagus so he can stop the threat. While doing so, you run into a cavalcade of comedic characters that all present with new story beats or quests, including guilds recruiting you and charging you insane fees or aliens looking to fix their flying saucer. It provides quick hits of comedy while instilling more motivation as to why you’re mowing down countless hordes of enemies and exploring dungeons. 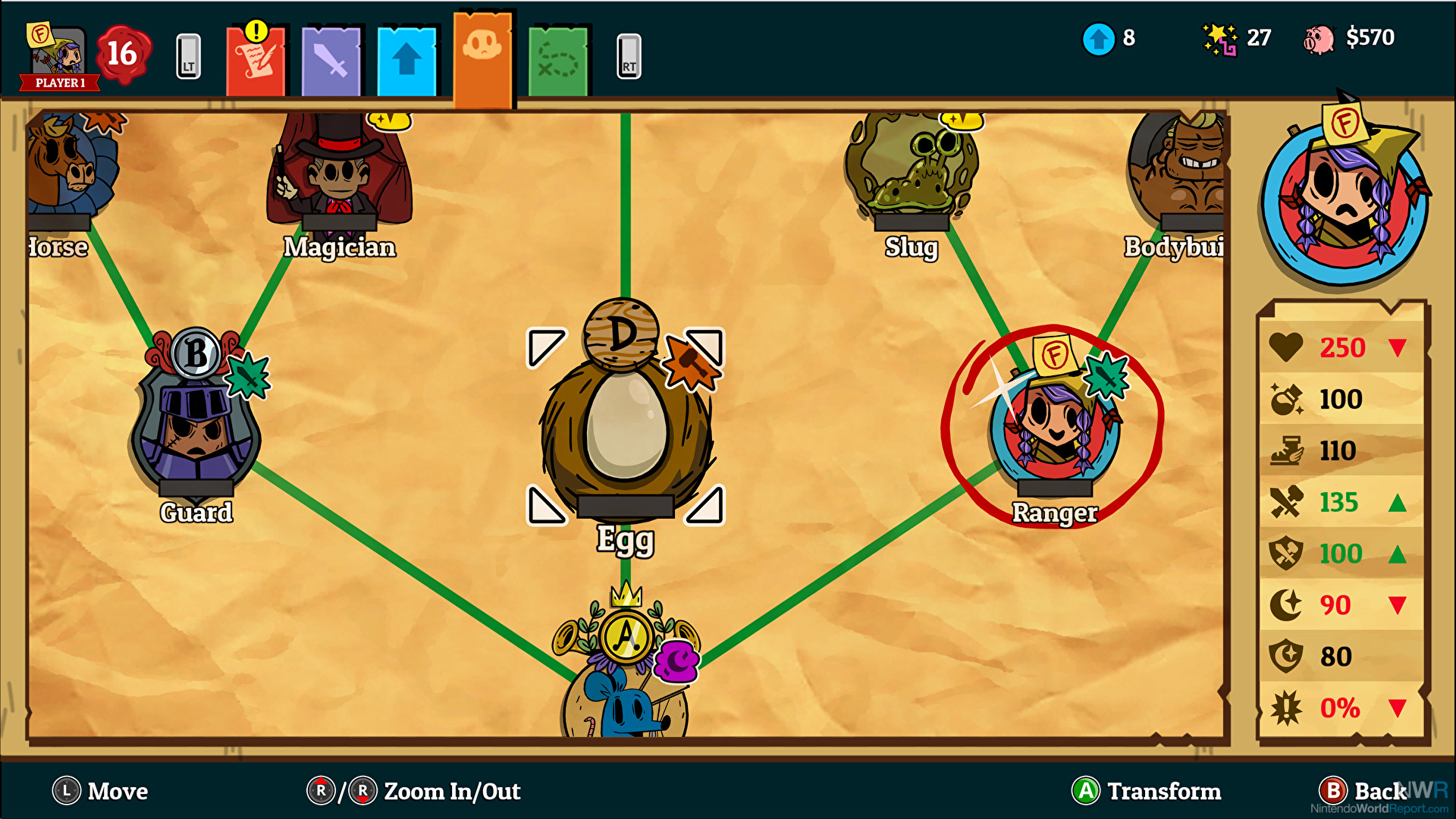 Nobody Saves the World has a decent number of dungeons that are randomly generated with multiple floors and usually a boss at the end. They do feel samey, with lots of repeated enemy types, but they try to vary it up with enemies only taking damage from specific types of attacks, dungeon modifiers, or bonus quests. The saving grace to the repetitive nature is that they each take roughly ten minutes, so it provides a quick distraction from the story and then you move on. It does feel good to destroy wave after wave of enemies in a spectacular Diablo-like fashion, but after unlocking all the classes with more story to go, the game slips back into a more monotonous feel. The modifiers also help add variety, with some giving status ailments or providing damage boosts to both enemies and players alike.

When presented with the opportunity to play some co-op, Nobody Saves the World runs really well as far as latency; unfortunately, its downfall is in the fact that the second player is just a copy of the first. So you do not bring in progress or level progression from your own personal game, just what the host has, and you’re expected to customize it yourself. What’s a shame is that to customize you need to go into the menu system and that pauses the game for both players. This slows down the entire process, meaning it can take a bit before you really get into the gameplay. Otherwise, it works well to combine multiple classes and abilities for even more crazy customizations that are just a blast. Just be prepared to spend some time setting it all up.

Being an avid fan of Drinkbox Studios previous games, I can gladly say Nobody Saves the World is another successful addition to their catalog. It brings creative class-based gameplay with a hauntingly fun animated art style that runs like a dream on the Nintendo Switch. Despite the repetitive nature of Nobody Saves the World, the lows never outweigh the highs of completing quests, upgrading abilities, and mixing and matching new class combinations. The map size and story length aren’t overly large, so even if it wears out its welcome a bit, it isn’t as egregious as it could have been. Leveling up and crushing waves of enemies never stopped feeling good, even after this Nobody had rolled credits.