Parkasaurus caught my eye in its brief appearance during an Indie World video in 2021. It’s a pastel-colored dinosaur park management game where you essentially try to make your own Jurassic Park, dealing with the potential security issues on your path to profitability. I also come into this game with a very specific circumstance. I am an adult who has enjoyed tycoon games over the years and I have a 4-year-old son who freaking loves dinosaurs. So I came to Paraksaurus hoping for it to hit the right balance of playful enough for my kid to toy around with, but interesting enough to hold my own attention. After a handful of hours in both the campaign and sandbox modes, I’m thrilled that Parkasaurus sticks the landing in ways that similar games haven’t.

First off, you can choose between the campaign or the customizable sandbox right away. The tutorial is definitely recommended, since it effectively introduces you to the basic concepts of creating exhibits, hatching dinosaurs, managing staff, and more. The sandbox can be structured however you want, whether it’s making it more realistic to the core game and having monetary limits or in my toddler’s case, just making the cash flow unlimited and just laying down a bunch of triceratops and stegosaurus. It successfully nails the experimental play part of the equation. 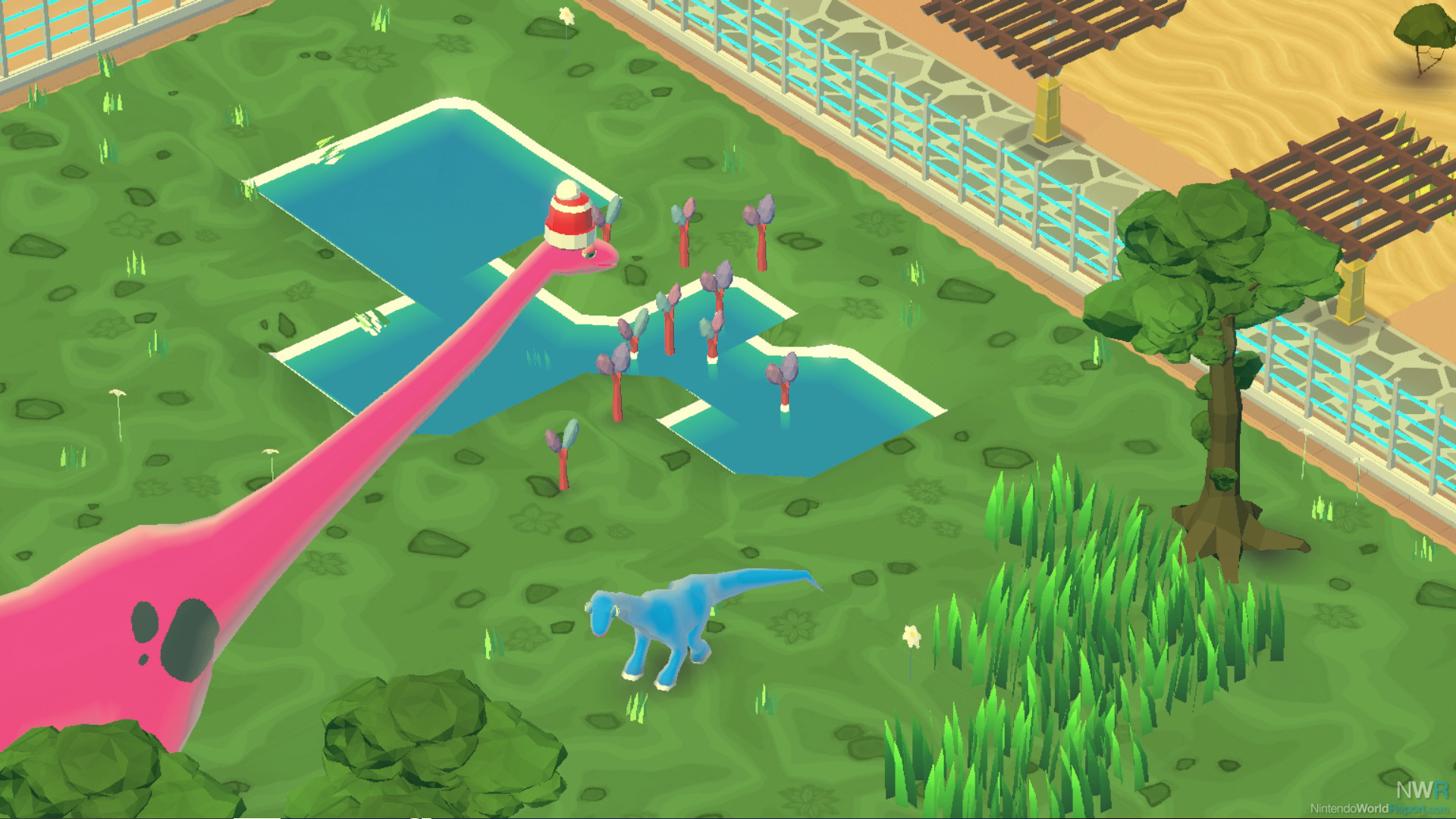 The campaign is a great balance between introducing concepts and providing a gentle difficulty curve. Like a lot of similar tycoon games, Parkasaurus has a lot of different systems to learn and manipulate. You have to build exhibits to fit the right space for the dinosaur, whether it’s making them a certain size or ensuring they’re the right habitat. Your park needs staff, ranging from vets to janitors so it’s an appealing and healthy place to be. Then you need to turn a profit by inviting guests, but watch out: that T-Rex might get loose and eat people. And ultimately, to sustain your extinct park attractions, you have to travel through time to get more dino eggs.

Everything funnels into each other in a snappy, cohesive manner. The UI is a little on the small side, but it’s more navigable than I initially expected, with tools logically placed and menus easy to access without having the screen be covered in words all the time. I played it on the television, the original Switch, and the Switch OLED and didn’t have any major text or comprehension issues. It naturally is clearer on a bigger screen, making the OLED the optimal handheld experience. I did not test the game on a Switch Lite, but I would express caution at this game being as enjoyable to play on a smaller screen. 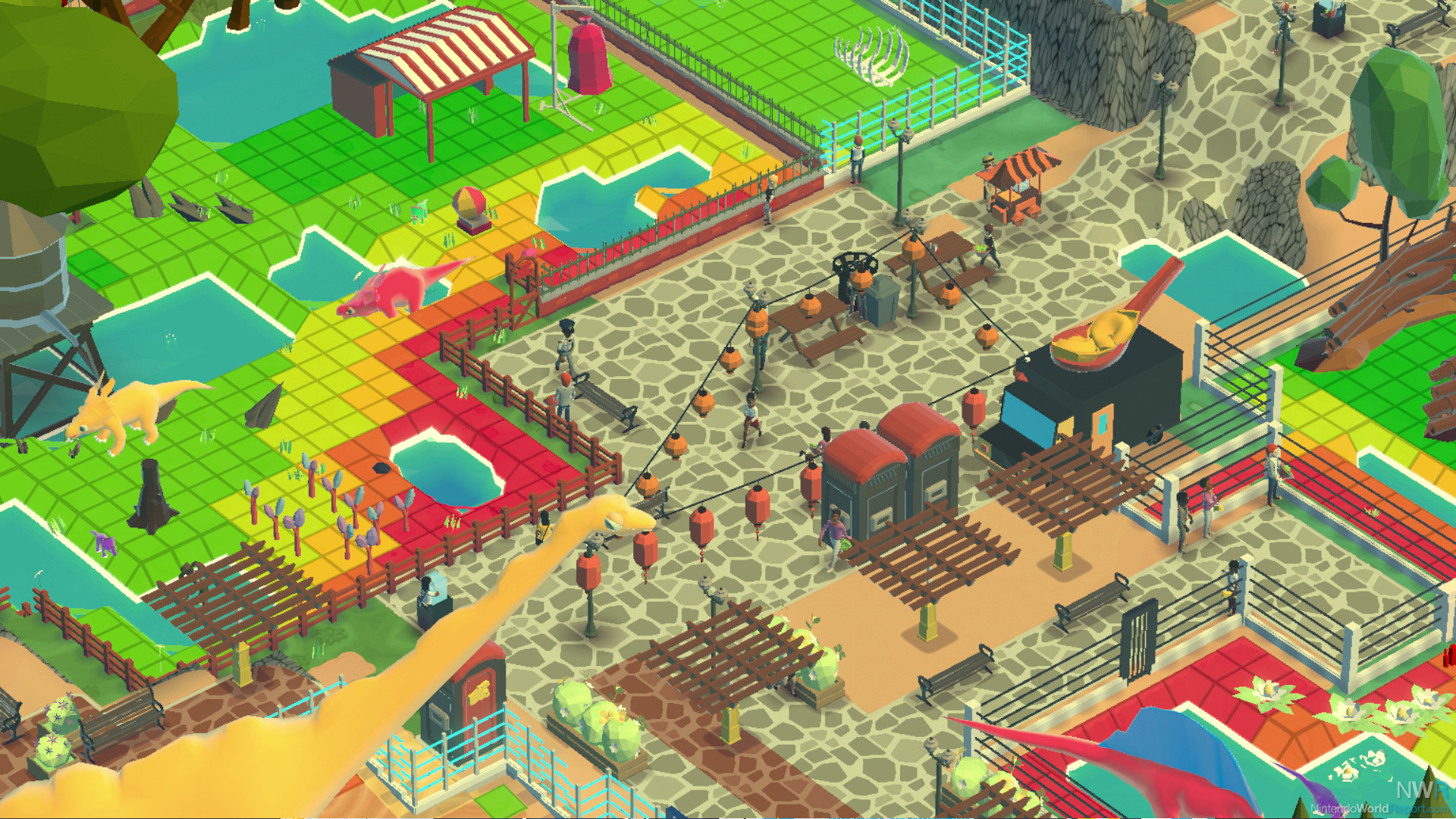 Parkasaurus satiated my dinosaur tycoon demands. For me, a dabbler in the management game arts, I found an enjoyable park designer where I had to balance finances and set up the coolest Jurassic Park-looking place I could muster. For my 4-year-old, he had a sandbox where he could screw around and set up whatever dream-like dinosaur scenarios he wanted to. We were able to do all this with a charming-as-heck visual aesthetic and a complex but workable user interface. Life finds a way.