Do ya’ll remember the Jackbox-style game What the Dub? (WTD) that I reviewed last year? Well, if you liked that game, you might also like RiffTrax: The Game, which could also be called a very large expansion pack for WTD. You and up to five friends get on your smartphones and either create riffs or select pre-recorded riffs and then vote for the winner. It’s a good time, but I’ll probably lean heavily towards the latter of the two game modes, which is more unique.

While I stop short of saying that your enjoyment of RiffTrax: The Game depends heavily on how much you enjoy RiffTrax or its spiritual predecessor, Mystery Science Theater 3000, it would not be inaccurate to say that having at least a passing familiarity with the comedic stylings of Mike Nelson, Kevin Murphy, and Bill Corbett will certainly give you a better appreciation for this game.

For those new to the RiffTrax scene, the series might be best described as “three friends make fun of old sci-fi movies and vintage educational films while you watch them.” They’re usually quite funny; the trio’s wisecracking commentary through Gammera: The Invincible, for example, had me rolling on the floor. In RiffTrax: The Game, you and your friends get to be the riffers.

In “Write a Riff” mode, you watch a very short video clip from some god awful public domain piece of media, and then go about writing your own smarmy comment, to which you can add a dizzying array of sound effects, although going through the full list of sound effects may take up all of your riff-writing time (although you can bump up the input time to two full minutes). Once everybody has written their zingers, the game plays the clip for each player and the actual riffs are delivered by an automated text-to-voice robot. This mode, then, is essentially WTD with different clips (and sound effects). This shouldn’t be too surprising, as both games were developed by the same people.

The robot voice is a robot voice that can only do so much. I felt it was better utilized in WTD because the goal of that game is to write your own LINES for the films shown. Here, you’re trying to write zingers, which is a bit different; zingers usually involve some degree of subtle voicework (like sarcasm) that the robot can’t deliver. However, it will also attempt to pronounce typos, which is a unique kind of hilarity. It will also happily say curse words, although, as in WTD, you can turn a curse word filter on from the menu. 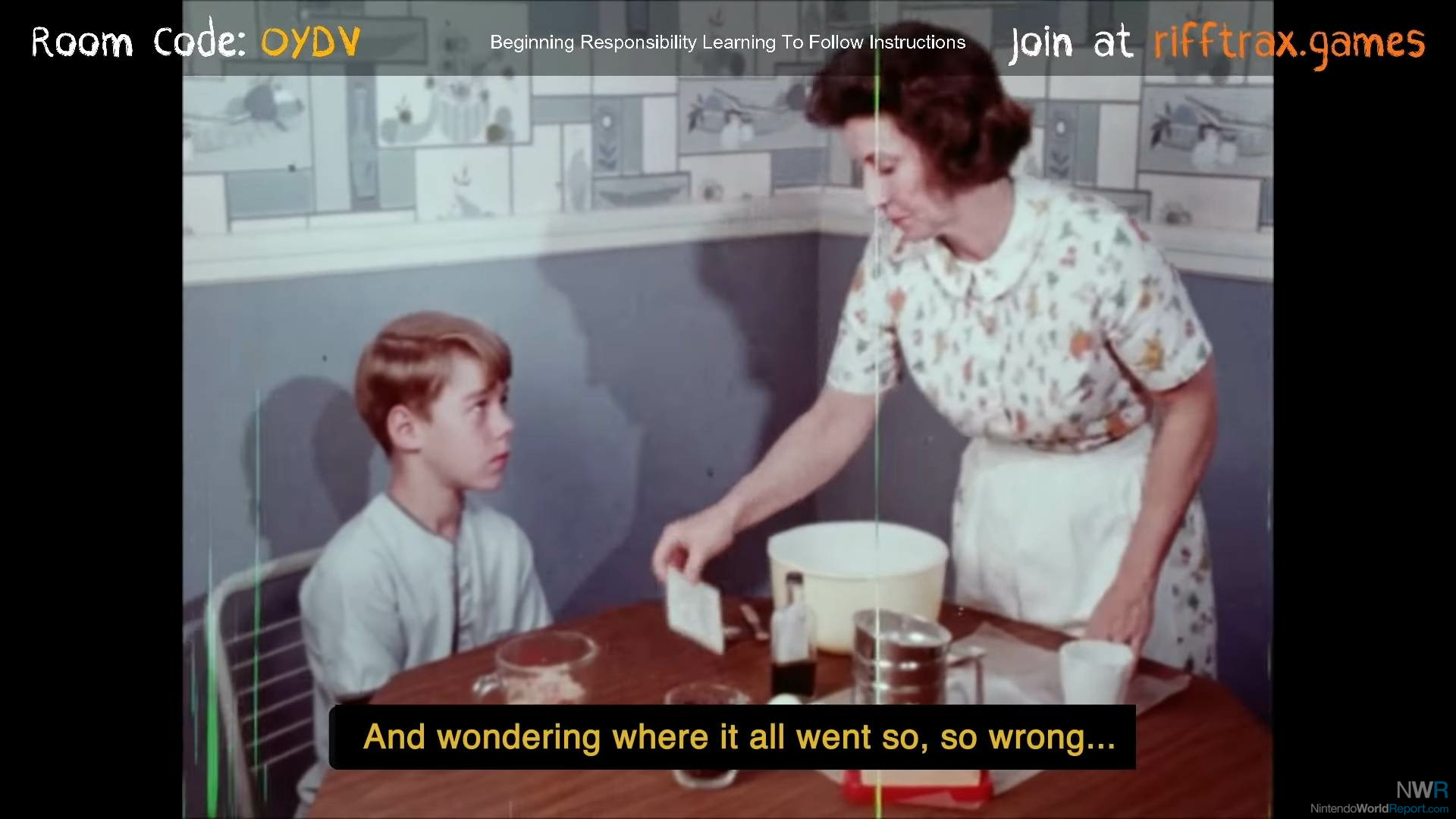 To put the RiffTrax in “Write a Riff,” the game, by default, includes a bot player, the Riff Bot, who delivers an actual riff delivered by one of the RiffTrax guys, from the actual scene. This has two effects: First, you can immediately tell which Riff is from the Bot, because it’s not a robot voice, it’s Mike, Kevin, or Bill’s voice. Second, it is a joke written and delivered by somebody who is probably much better than you at this. If it wasn’t as obvious, the Riff Bot would win every round. Thankfully, you can turn the Riff Bot off in options, which I did almost immediately. If I want to listen to RiffTrax, I’ll watch RiffTrax.

I found myself enjoying “Pick a Riff” much more, because it’s essentially Cards Against Humanity* (CAH) but with RiffTrax lines. You’ll see a clip, and then get a list of jokes. Each player has a unique list, and these are randomized voice clips, so you pick the one that you think best works with the scene. Then you vote on which one was the best fit. As in CAH, your “hand” decreases over time, but you can restock your riffs once per game. “Pick a Riff” feels much more like what RiffTrax: The Game should be, whereas “Write a Riff” feels like WTD with an optional Riff Bot that you will likely turn off.

One other thing to touch on is that RiffTrax: The Game is extremely streamer-friendly and includes, among other things, some Twitch-specific options. You can even allow a moderator to approve or reject riffs before they’re played in case some jackass is being a troll. You can customize the number of rounds (up to ten) and the input and/or voting times, which I found handy depending on the crowd. As in WTD, there are plenty of in-game achievements to be earned if that’s your thing.

RiffTrax: The Game is a good time with a good group of people. Everybody had about the same amount of fun with “Write a Riff” mode as when playing WTD, even given the different goal (riff vs. line) but most of my friends agreed that “Pick a Riff” was the more interesting game. As in CAH, when you get a joke that lines right up with the scene in question? Priceless.

*I re-read my review of WTD, and was surprised to see that I compared it to CAH. That’s dumb and wrong; it’s more like Quiplash. You vote on answers that people make up, you don’t have a pre-set list of responses that you try to match up with a given prompt. I’m a moron.