You dear readers might recall my 2019 review of a delightful WayForward brawler called River City Girls (RCG). This offshoot of the River City series, more properly the Kunio-kun franchise, featured Kunio & Riki’s significant others—Misako and Kyoko—as they painted the town black and blue in search of their kidnapped boyfriends. RCG is an attractive, charming, modernized brawler that I really enjoyed despite some minor issues, and the titular girls were engaging and fun. While we impatiently wait for River City Girls 2: The Legend of Curly’s Gold (probably not the real title), WayForward has given us River City Girls Zero (RCGZ) as a stopgap. It’s an interesting title for a lot of reasons.

First, you’ve probably heard that this is not actually a new game. It’s the first English-localized port of a 1994 Super Famicom titled Shin Nekketsu Koha: Kunio-tachi no Banka. For our purposes, it’s significant in introducing the characters of Misako and Kyoko. The game is weirdly cutscene-heavy for a brawler: Kunio and Riki are framed for a hit-and-run, escape from prison, and set about trying to clear their names and coming across some plot twists that wouldn’t be out of place in a daytime soap opera.

WayForward has handled the localization beautifully while adding now-standard display options, like various aspect ratios, a CRT filter, and (frankly awful) letterbox borders. The real draw for me, however, is the intro and outro cutscenes produced largely by one of my favorite retro-anime artists, David Liu, with a new theme song composed and performed by Megan McDuffee, who also produced the exquisite soundtrack for RCG. After that, we are treated to an appropriately meta manga cutscene—linking it to RGC—in which our heroines find and fire up Shin Nekketsu Koha: Kuniko-tachi no Banka.

All good things come to an end though, and I’m sorry to say that RCGZ is not particularly fun to play.

Now, I want you all to recall what I said in my recent review of Shadow Man Remastered:

“This is game preservation as it should–keep the wrinkles, warts, and missteps…let the strengths of the original games speak for themselves.”

I said that old games shouldn’t be “fixed” for modern audiences, and while I still believe that, such a philosophy lands on RCGZ like an ACME anvil. This game is simply not enjoyable. The controls feel imprecise, not just because it’s ridiculously hard to line up an attack, but also because button sensitivity often feels inconsistent. You can block, but the window is quite short. Kunio & Riki can pummel dudes who are lying prone, but Misako & Kyoko can’t. Special attacks—activated by holding L/R and hitting a face button), are required for success, but setting them up usually involves some pre-planned choreography. Jump kicks provide easy knockdown opportunities, but it’s easy to get hit out of them.

Boss fights go on too long, their attacks are too powerful, and those attacks usually override your own. You’ll fight a couple of them more than once—including one fight that essentially happens twice in quick succession.

Roughly half the game allows you to swap between Kunio & Riki freely, and the other half involves all four characters. You must juggle them based on health, because if just one of them dies, it’s game over. Checkpoints are plentiful, but that may come at the cost of watching an un-skippable dialogue sequence when you restart. 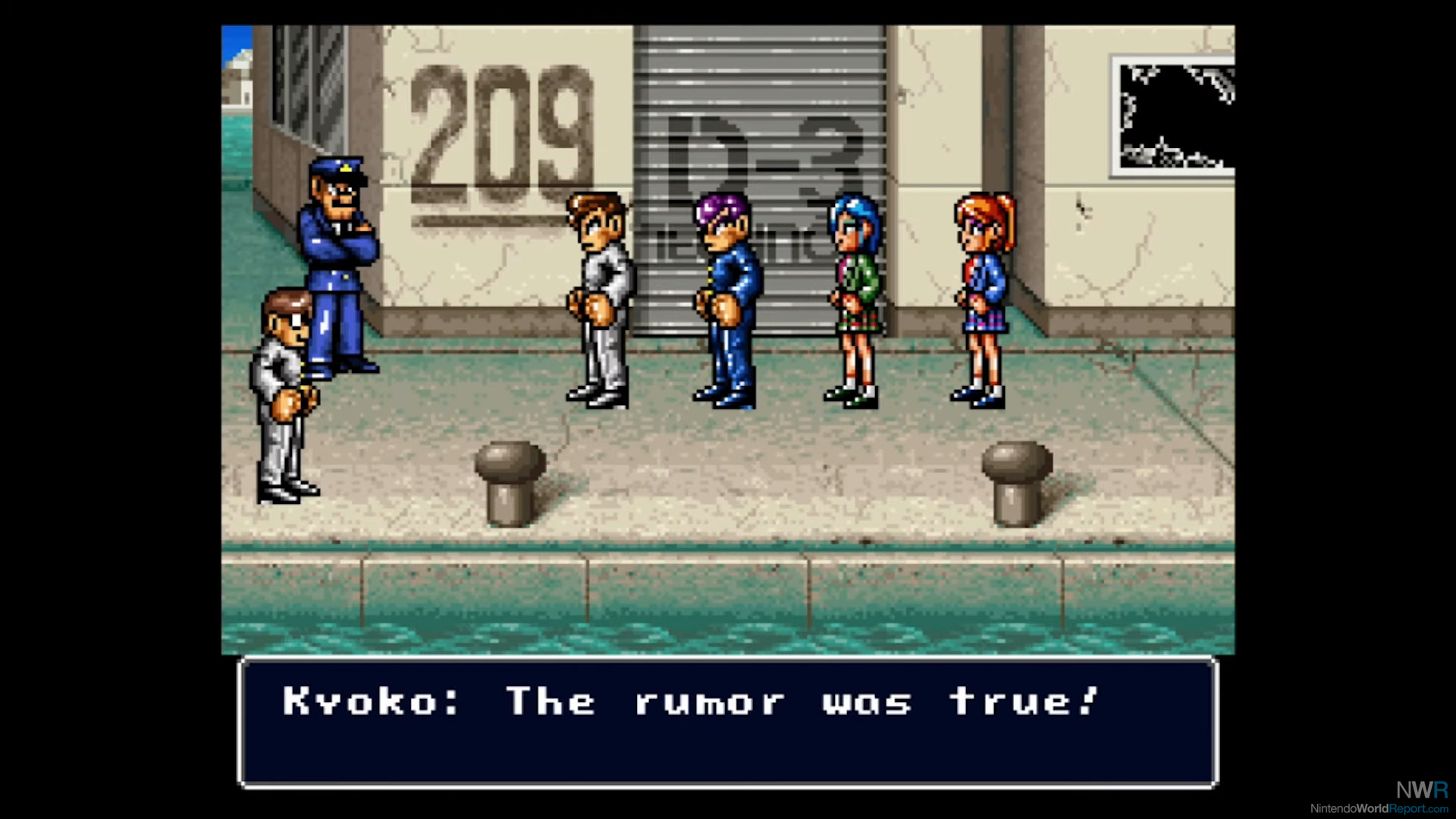 You’ll quickly find that Misako & Kyoko are basically there to absorb attacks, as their attacks are fast but relatively weak, and they have no ground game. Kicking enemies while they’re down is possible but weirdly hard to activate. There are occasionally brief platforming segments where you’ll need to press Y (punch) to grab a ledge, but the game’s instructions fail to mention that. In areas with a large lateral spread, if you find you can’t move forward, you’ll have to walk back to the other end of the room to see that a couple enemies have magically appeared off-camera: you have to defeat a pre-approved number of goons before doors will open.

The plot, while it does have a few bananapants twists, actually sidelines our heroines (before Kunio & Riki enter the final area) in a way that would have made me gasp in 1994, but today, in a game called River City Girls Zero, I had trouble processing. Again, WayForward did not fix this game, nor should they have, but I did hear Jurassic Park’s Ian Malcolm in my ear:

At best, Misako & Kyoko are co-stars in their own origin story. I understand that’s an unavoidable part of Shin Nekketsu Koha: Kuniko-tachi no Banka, and again, I’m happy they didn’t change the game, it’s just kind of a drag. It just makes me want River City Girls 2: The Secret of the Ooze (probably not the real title) even more. I want to watch these gals kick ass, not watch them be upstaged by their boyfriends.

If you do manage to suffer through the game, including its frustrating final boss, you’ll be rewarded to another manga cutscene, another beautiful David Liu cutscene (which I would like as a desktop background), and another McDuffee song.

And then, and this is truly the best part of RCGZ, you unlock the ability to play the Intro, Outro, and End Credit sequences from the main menu. You can also flip through scanned pages of the original game’s Japanese instruction booklet if that’s your bag. I haven’t played too many games where the bread is the best part of the sandwich, but here we are.