One of the immutable rules of video games is that if a genre exists, somebody will fuse it with a rhythm game in whatever way they can. One of the most recent results of this rule is Soundfall, a third-person isometric “looter shooter” that gives the format of titles like Destiny the rhythm game treatment. With a tracklist made up of a variety of genres and five playable characters with their own playstyles, the real question becomes how effectively do the two types of game mesh with each other. Fortunately, the answer is that they join together quite well, but not without some flaws.

In Soundfall, the player takes the role of Melody, a young woman with musical dreams but financial woes. One day before work, Melody finds herself transported into the world of Symphonia, where all music originates. There she is told that she is a fated Hero of Harmony, here to save the world from the threat of the Discordians, monsters who seek to corrupt and destroy all music. Hoping to get home in time for her shift at the coffee shop, Melody picks up a gun (and eventually a sword) in order to fight the Discordians and save music, meeting the other Heroes of Harmony along the way. Each of these characters comes with their own special weapon and ability.

Controls in Soundfall may seem slightly intimidating at first glance, but they’re honestly not all that complicated. ZR fires your gun, of which there are several different types, and these shots must be fired on the beat in order to do maximum damage. Failure to be on beat with shots will still do some damage, but after a few misses the gun will overheat and be unusable for a short period of time. Pressing L executes a dash, which once again must be done on beat in order to provide maximum distance as well as a brief period of invincibility. ZL will use your character’s special weapon, each of which works differently. Melody’s is a sword with a three-hit combo that must be performed on the beat, but other characters have weapons like a large shield capable of performing a shield bash, a bow that heavily reminded me of the bow in Hades, and more. 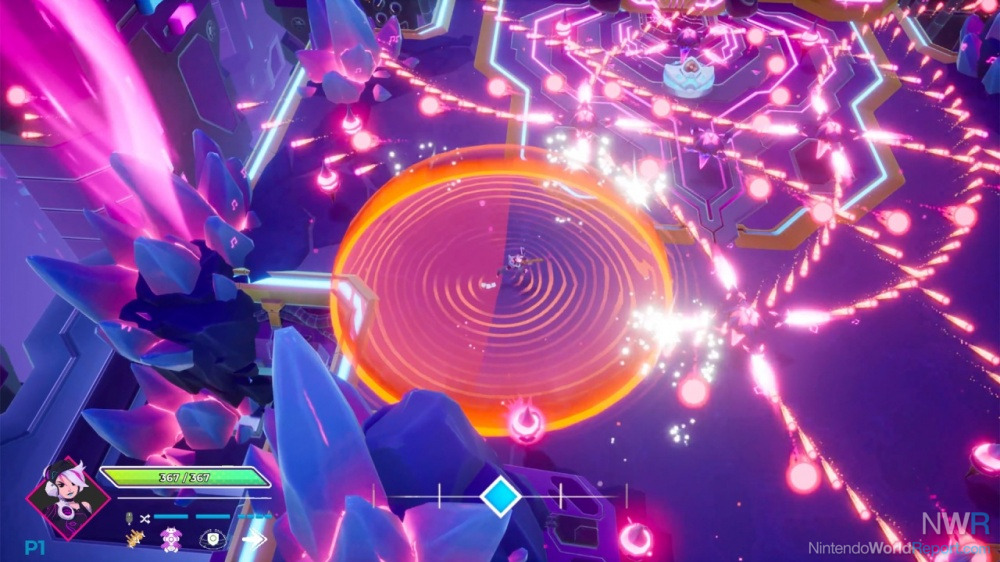 Gameplay moves quite smoothly in Soundfall; the buttons are all responsive and feedback for when you are off beat is visually clear. When you are off beat there is a visual metronome at the bottom of the screen that can be used to get back on track, but there were several times when this didn’t feel like enough for me to actually succeed, especially in a high stress situation. There is also a problem where all of the songs are a set length and start over if you do not complete the level before they end, but some of these songs end with several seconds of silence before they start up again. When this happens, it is almost impossible to stay on beat, because there is no music to keep up with. This doesn’t happen every time, but just enough to be annoying. The musical selection is quite varied, from electronic and orchestral to metal and other genres. Regardless of what type of music you’re into, I can pretty confidently guarantee you that you’ll find something you like in Soundfall’s tracklist.

One of the major flaws of Soundfall’s level design is that its procedurally generated levels start to feel very samey after a lot of playtime, as you start to see the limited number of parts that the generation uses repeat over and over. Obviously for a game like this, the main event is the music and not necessarily the levels, but it still puts a bit of a dampener on the experience after a long play session. Overall, Soundfall is a fun music-based experience that isn’t doing anything remarkably new, but what it does, it does well. The guns feel good to shoot, the environments are enjoyable and dance along to the music, and the tracklist is filled with a variety of certified bangers. If you’re looking for a rhythm game to kill a few hours with, Soundfall is worth a peek.