Odd Bug Studios’ Tails of Iron looks like a game that’s very common these days. It is a hand-drawn 2D action adventure game with RPG mechanics, punishing combat and optional exploration. With those descriptions it was possible for Tails of Iron to feel derivative. However, after playing it, I really think that Tails of Iron is something people should take a second look at.

The story of your adventure is a single moment in ages of warfare. You play as a young prince rat named Redgi. His father, the rat king, led his kingdom to a temporary victory over their nemesis through generations, a kingdom of frogs. The beginning of the game sees an elderly rat king pass his crown to Redgi right before the latest siege of the frog kingdom which demolishes their kingdom, Crimson Keep.

Tails of Iron rebuilds a kingdom through action. Moving through the story and completing side quests has a tangible effect on the overworld. The player starts out ruling over a ruined land, but they will slowly and steadily build it back from the brink. The ravaged courtyard of Crimson Keep will become home to working rats and music after a few quests instead of being home to rubble and corpses. Long Tail Village’s merchants and citizens return after helping their local leader. Even the areas outside of the main cities see the same type of rebuilding. Farms and Mines will begin production again. Routes out to distant areas will have bridges built and enemies cleared to make them less tricky to navigate and treacherous. Time invested in Tails of Iron gives a satisfying sense of actually affecting the world.

Quests come in a few different flavors. Mostly it’s combat, but there are a number of retrieving item missions plus some rescue missions. Rarely, one of the tasks for Redgi is to escape an area he’s become trapped in. Two early quests involve rescuing two castle workers, a chef and a blacksmith, from frog encampments. Later the blacksmith will ask you to fetch a book of blueprints in order to better outfit Redgi for his trials. The smallest quests are as easy as existing in the world; it’s possible to buy items such as paint and wood from vendors then trade those items to a farmer to start a commercial beehive. 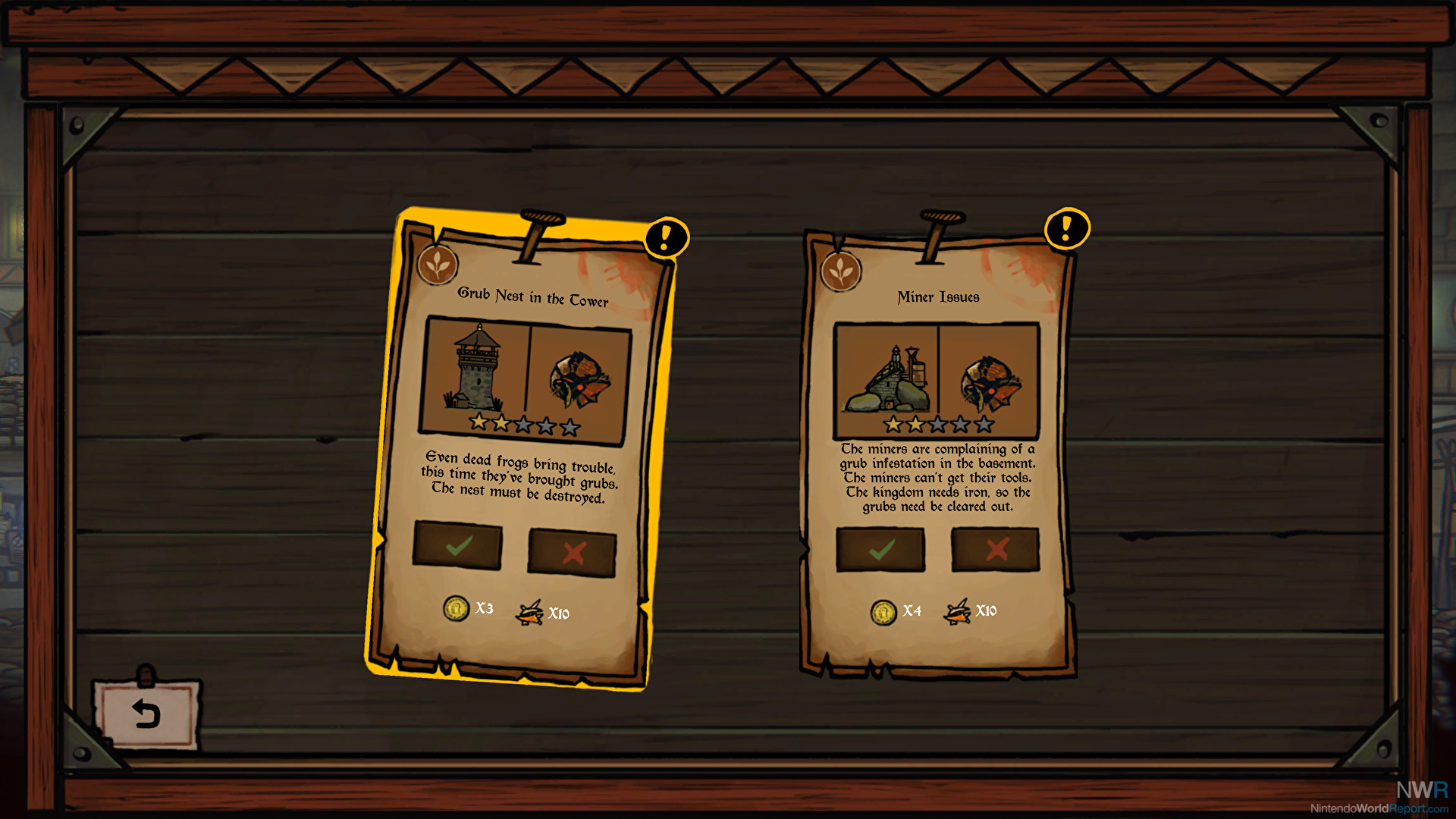 The majority of quests involve going to an area and clearing out any present enemies. Frogs were seen by scouts in the sewers, so Redgi will have to venture into them and slay all the frogs. A local farmer has a bug infestation in his cellar. All the dead frogs in the sewers are attracting dangerous wildlife. Even if the design of these quests are similar, the mechanics of each type of enemy make the fights unique, and Odd Bug Studios made an effort into thinking of ways to incorporate these quests into the story of the world. I never felt like I was going down into a dungeon to kill something just because. The inventiveness behind the mainline quests starts to run out of steam a bit around the last hour or so of the game, but for 90% of my playthrough the quest stories were engaging. The rewards for these quests are all useful. They can be a new weapon or armor, items to feed back into the RPG systems like blueprints or food, or currency to spend how you would like.

The mechanics of defeating enemies is a melee combat system focused on recognizing attack patterns and punishing openings left by enemies. Reacting to attacks is either shielding or dodging. This is another instance of being something very familiar. Despite the tried-and-true nature of the combat mechanics, none of the fights are boring. Each enemy unit has unique moves that need to be learned, as well as some units having a defensive stance that needs to be broken first. 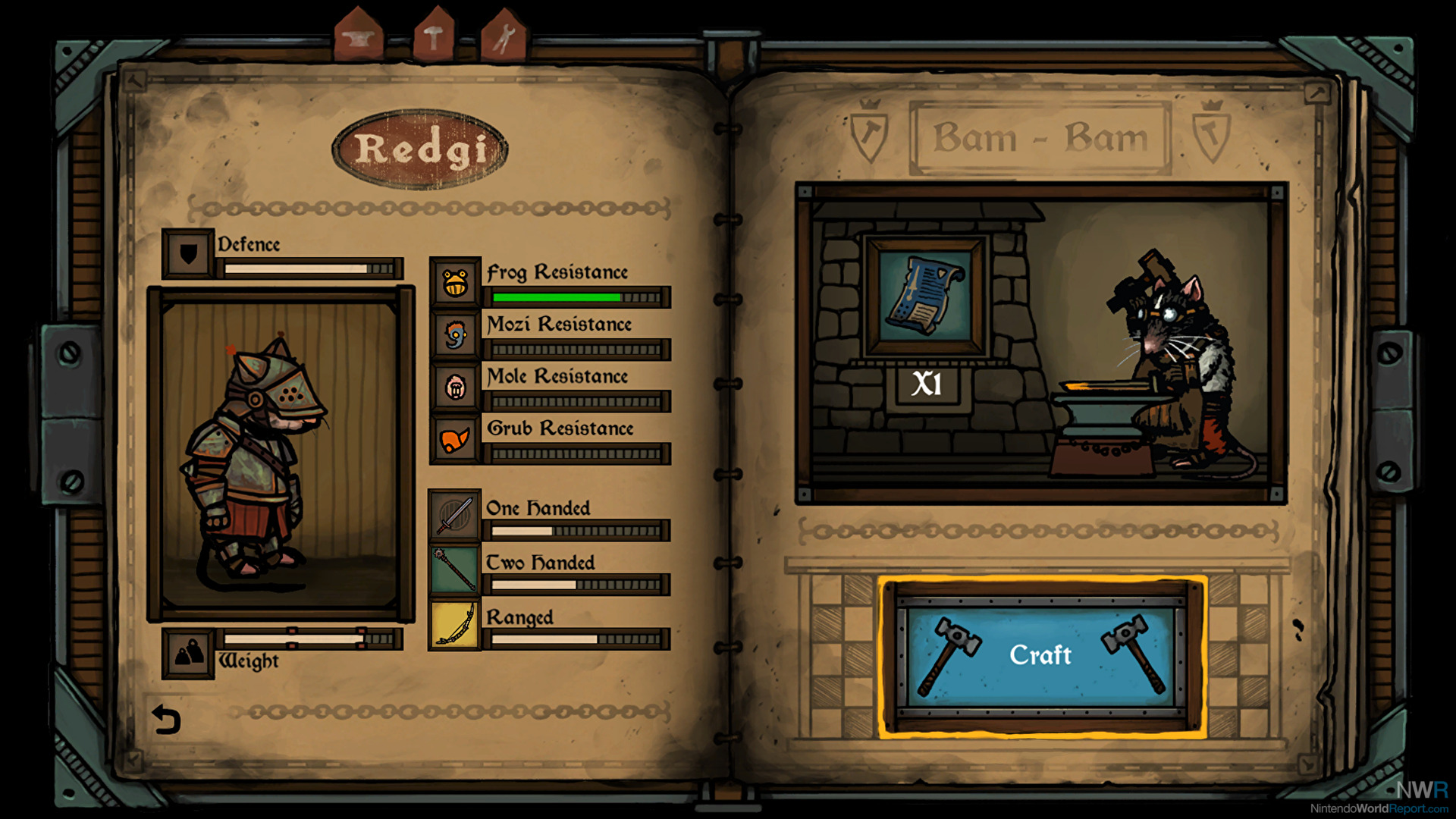 The RPG mechanics add to the variety with armor and weapon loadouts. There are three types of weapons: swords, axes, and spears. Spears are the fastest with the longest reach yet do the least damage. Swords are a middle tier of each attribute. Axes attack the slowest but hit the hardest. Armors are more varied by having different defense ratings, unique resistances, and come in light, medium, and heavy weight classes. The resistances aren’t to things like fire or poison, but against enemy types instead. There are four enemy types that some armors can protect Redgi against more than just their defense rating. This adds a small preparing stage to big fights. The weight system complicates this preparing stage by affecting how quickly the player can run, attack, and dodge. The lighter your equipment, the faster all three of those actions are.

The most visible twist to the combat is a rock, paper, scissor mechanic. Occasionally enemies will flash one of three symbols above their heads. This signals a special type of attack that they are about to execute. Each special attack has a specific defensive action to avoid damage. Depending on the indicator, the player must either run away from the enemy, dodge, or parry. The inclusion of this system makes combat more dynamic. The player has to stay on their toes and focused, plus the enemy gains a unique and terrifying attack. In case anyone was worried this was going to make enemies too readable, later ones will have multiple versions of these special attacks. Noticing which animation leads into which attack is still required. 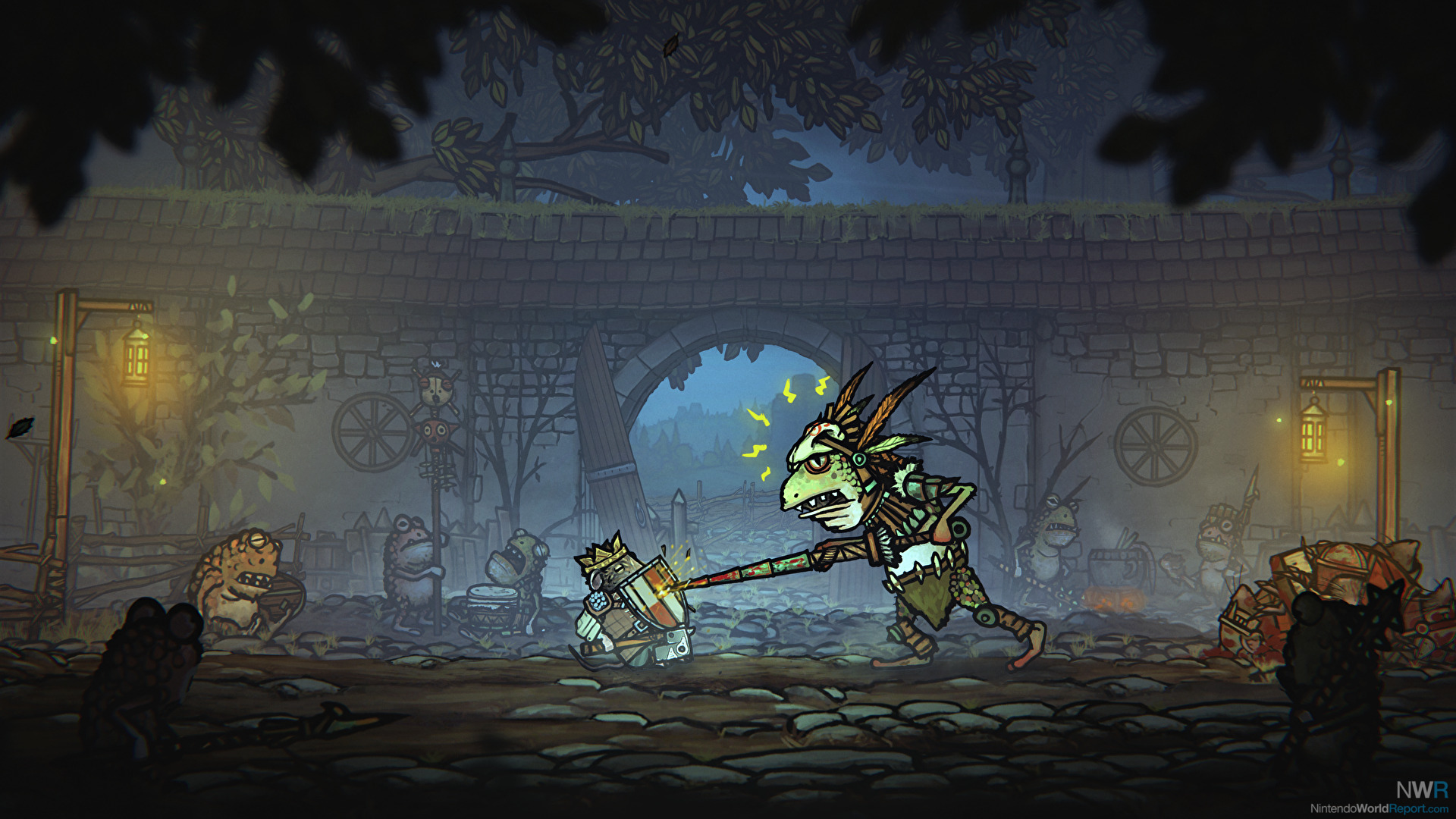 I still haven’t really decided if the addition of the telegraphed attacks make Tails of Iron more accessible when it comes to difficulty. Being able to see what an enemy is immediately going to do is helpful. However, it takes away the effective-in-most-scenarios tactic of just hold the shield button present in other games with similar combat systems. Every enemy, even the earliest of weaklings, will be able to bypass Redgi’s defenses. Every enemy will force you to time and dodge their attacks which usually come out very fast. There also aren’t any difficulty options present. If you’re looking for a more accessible game in Tails of Iron, I don’t think it’s that. It is possible to make the combat a little easier by exploring and interacting with the RPG mechanics. However, despite dealing more damage, having higher defenses, or having a bigger health bar, players will still need to spend time learning the fights. 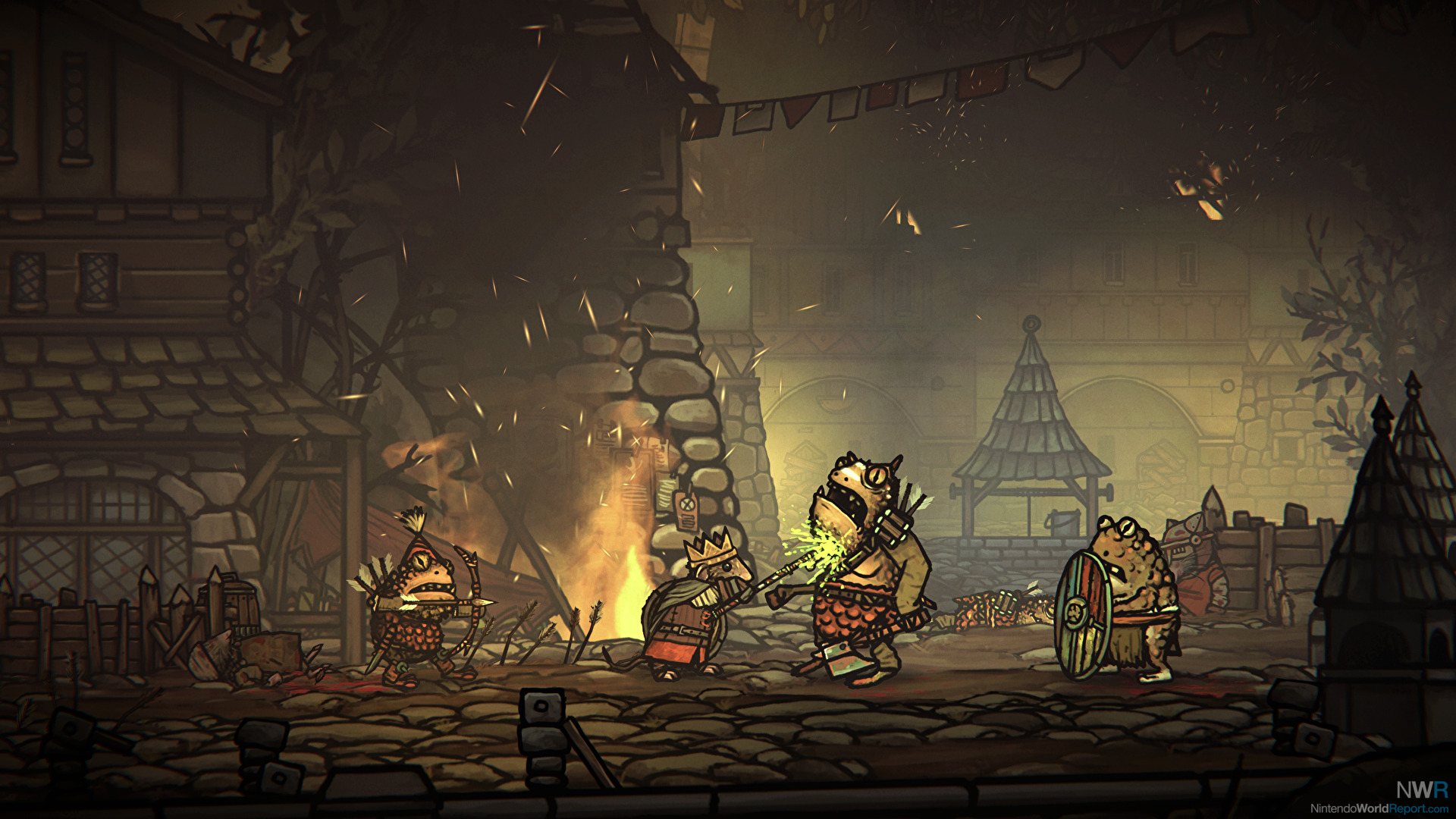 With how taken I am with Tails of Iron’s worldbuilding, it’s really disappointing that my one big complaint is related to it. The game is narrated by Doug Cockle, Geralt of Rivia’s voice actor. He does a great job. His narration gives the story a fairytale quality that I really enjoy. However, his inclusion, or how much he is included, comes at the cost of character development. Since no characters in the game speak or have any written dialogue at all – everyone talks in pictograms – each character has the same personality. Everyone you meet can be described as “helpful citizen.” All the NPCs are still able to emote thanks to great animation work. Something as subtle as feeling ashamed was still readable, but talking to a new NPC was too similar to talking to any other NPC too often. The first and only character to have a different personality wasn’t until I found a city of mole communists underground.

Fortunately, the environments have enough personality to keep the game from feeling stale. Crimson Keep and the wooded forests surrounding it feel different to Long Tail Village and its adjacent farmlands as well as Mole City’s grimey modern metropolis or Frog Village’s poison swamp. All of these areas are beautifully drawn with a ridiculous amount of details. Even the loading screens and menus are delightful with an art style reminiscent of medieval art. The sound design is also additive here. It does something very clever in that there isn’t music unless Redgi is near a source of music like ones found in towns or near a traveling bard. Dungeons and outskirts will have a backdrop of ominous tones mixed with ambient noise like rocks tumbling or farmers working. Sources of music will sound soft and muffled at a distance, but coming closer to them will increase how loud and clear they are. This trick adds a greater sense of place for me. 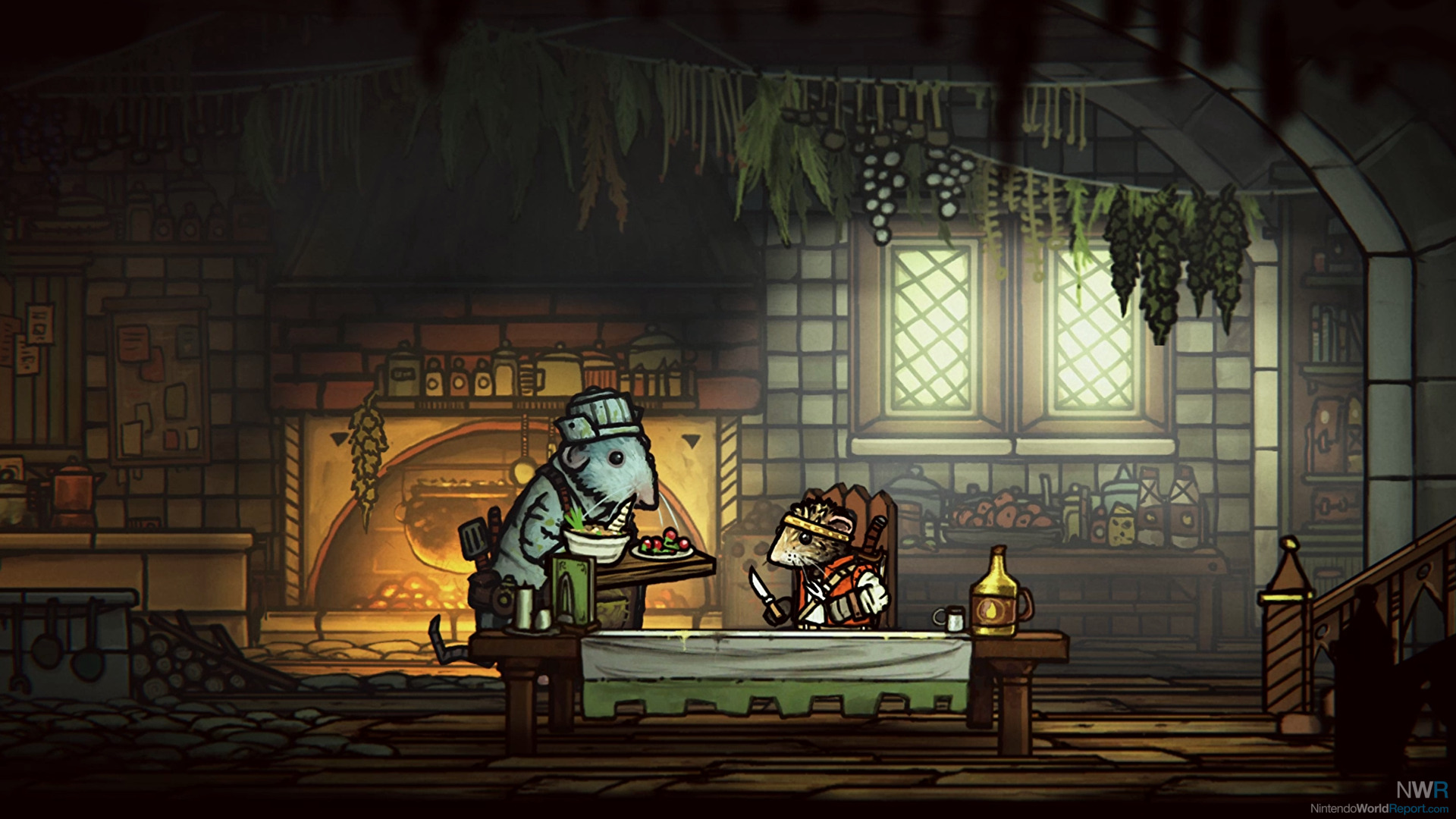 I’m impressed by how much thought was put into Tails of Iron and how that shines through while playing the game. Nearly every new screen I entered contained another small inclusion to admire. In my final attack on Frog Village, I found farmer frogs tending to their fields in between fights with enemy frog soldiers. Odd Bug Studios including them shows that even the big enemy isn’t only evil; this is a civilization that unfortunately happens to hate Redgi’s. The care and attention to world building would have been enough to keep me playing Tails of Iron, but the tight combat made it a joy to play the whole time.

All PS5 and Xbox Series X games that support 120fps