The word “milestone” in the title of TAITO Milestones seems purposeful, and noticeably distinct from something like “classic.” It would be hard to argue that even two or three of the 10 games in this package could be considered examples of the latter qualifier. That said, the Switch continues to be a welcome home for old and rare games from the ‘80s and ‘90s, and the addition of online leaderboards for each game in this TAITO collection is a very welcome feature. If you can look past the dust on the offerings here, particularly those from 1981 and 1982, the historical and curiosity value of TAITO Milestones might make it worth adding to your Switch library.

The two titles from 1981 are QIX and Space Seeker. QIX has seen a number of re-releases, ports, and sequels, but the basic premise is that you are drawing shapes on a blank screen to fill it up with color. Once you reach a specific percentage, you win that level and move on to the next. Attempting to halt your progress is a roving band of colored lines (the titular QIX) and a number of sparks that travel along lines around the screen and are deadly to the touch. Space Seeker is a combination first-person and horizontal space shooter, with an overworld where you move your ship to one of three enemy fleets or three enemy bases, activating the two different gameplay perspectives, respectively. While it’s tough to look at in terms of graphics, it’s definitely unique for the way it combines a few different types of gameplay. Of the two games from this year, QIX probably holds up a little better, even if its sound effects are likely to make your ears bleed.

From 1982 come Alpine Ski, Front Line, and Wild Western. Alpine Ski, as you might expect, is essentially a one-button downhill skiing game. You have to navigate around boulders, trees, other skiers, and snowmobiles while collecting points, skiing in between flags, or even taking on the ski jump. What makes this game particularly difficult is that you’re on a two-minute timer and every time you crash it removes 10 seconds. I found even reaching the ski jump on the third screen to be a major challenge. Front Line is a mostly vertical-scrolling run-and-gun shooter, with movement controlled by the left stick and aiming on the right stick. Both your bullets and those of the enemy soldiers are small and hard to see, but you can throw grenades and even hop into a primitive-looking tank. It’s tough but offers a decent time. Wild Western is probably the most captivating of the bunch and controls much like Front Line. As a train in the center of the screen makes its way to the station, heading up, you ride in from the side of the screen on horseback and need to take out a handful of opposing riders. You’ll even need to jump on the train to shoot enemies who scamper up there first.

The 1983 titles include Chack’n Pop and Elevator Action, the former featuring characters who would appear in 1986’s Bubble Bobble. In Chack’n Pop, you need to run through a maze to open up hearts before making it to the exit. You can throw bombs to the left or right to take out enemies, but you have to be careful not to get caught in the blast radius. Rather than jumping, you flip and stick to the ceiling, adding an interesting wrinkle to traversal. Ultimately, I didn’t find it as compelling as Elevator Action, which sees you entering a tall building through the roof and making your way down to the bottom. Along the way, you need to enter red doors to collect documents and shoot enemies who pop out of other doors on each floor. While taking an elevator up or down between floors is the primary transportation, there are also escalators, too, and both methods can also be used by your gun-toting foes. Successfully navigating one building brings you to another, more challenging one, but the gameplay loop is fairly satisfying. 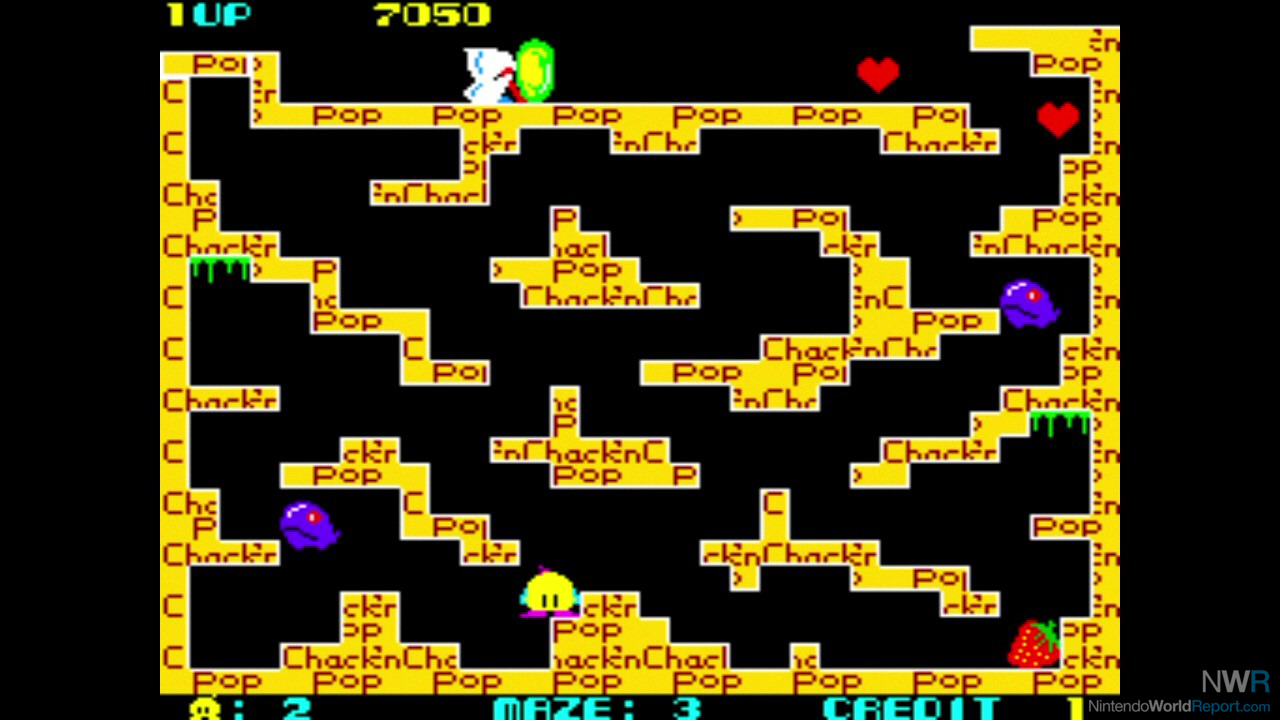 The last three games come from 1985, 1986, and 1987: The Fairyland Story, Halley’s Comet, and The Ninjawarriors, respectively. The Fairyland Story is essentially Bubble Bobble but with less charm; you use your magic wand to turn enemies into cupcakes and then smash or drop them onto other enemies until you’ve cleared each screen. Halley’s Comet is a vertical shoot-’em-up that plays pretty well but is tough as nails. It features a journey through our solar system, with enemies and certain projectiles that get past you building up a damage meter for the planet you’re trying to save; when it hits 100 percent, it’s a game over. The Ninjawarriors is a side-scrolling brawler with boss fights and scores of enemies to fight in each level. There’s only one character and one plane of movement, so crouching and jumping are the only ways to avoid enemy bullets. The difficulty ramps up massively after the first stage, but fortunately you can pick up where you left if you die (provided you don’t mind spending another credit to do so).

Anyone who’s played a release from the Arcade Archives series will be familiar with the menuing, instructions, leaderboards, and settings offered in TAITO Milestones given that. What this release lacks in bonus features, like developer commentary and materials, it makes up for in easy to access game tweaks and online leaderboards. Within almost each game you can adjust the number of lives, the difficulty, and the appearance of scanlines. There isn’t much in terms of backgrounds, and the collection doesn’t even have a start screen before the 10 titles are shown off, but it all functions well enough. Even though substance over style was clearly the aim, it was disappointing not to see the staple Caravan Mode from other Arcade Archives releases be a part of this package. 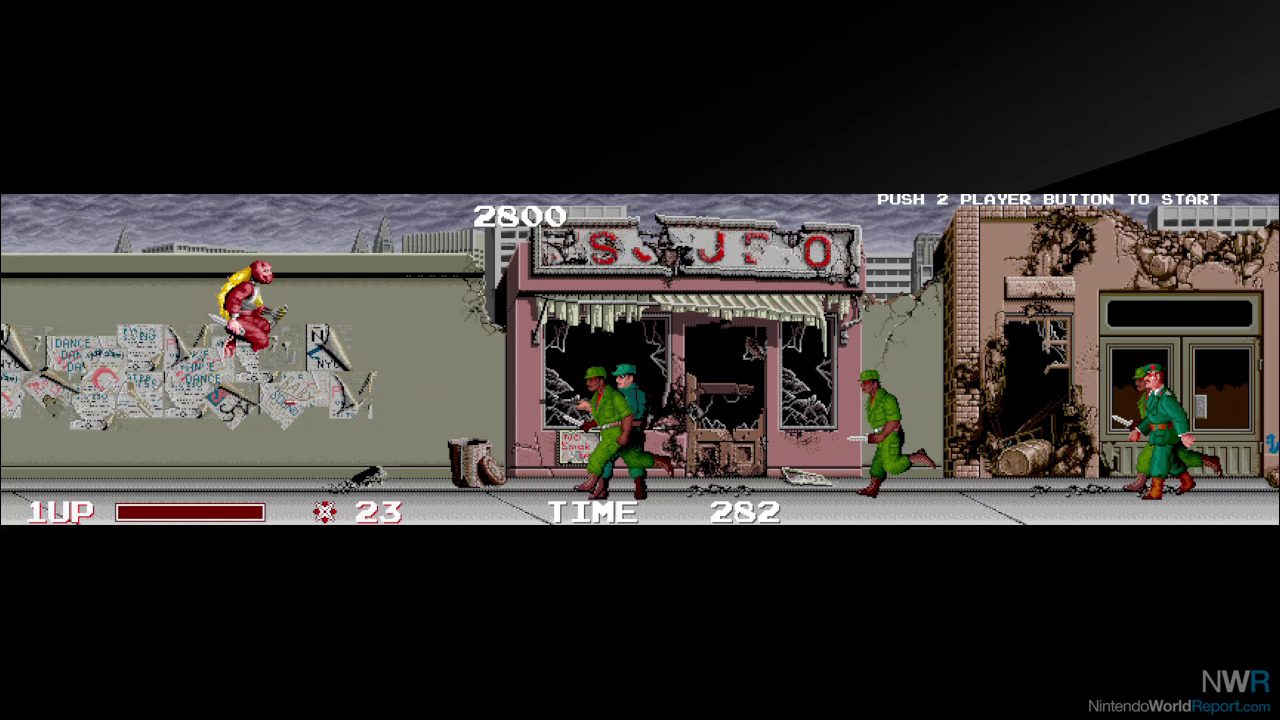 Should you be into ‘80s arcade games and retro curios, TAITO Milestones is going to have some appeal. The gameplay on offer here hasn’t aged particularly well, but it’s always enjoyable to be able to compare contemporary video games to those that came before, just to see how far we’ve come. Even in the six years between the earliest release and the latest of these 10 games, you can see a massive difference in quality and performance. While the lack of extra features and presentation is a tough pill to swallow, the online leaderboards for each title add excellent replay value to games that are all about chasing high scores. Going into these offerings and not expecting stone-cold classics is sure to be a refreshing and educational experience, and you might even find a few old-school arcade titles to keep on rotation.