Ultra Age is a combat-focused action game co-developed by Next Stage and Visual DART that uses Unreal Engine 4 to create a graphically impressive game that feels as though you are playing a big budget game at a competitive price. Set in the distant future where a passing meteor has altered Earth’s ecosystem, the planet has become almost uninhabitable and deserted. As Age, a warrior who has come out of orbit to Earth, your mission is to save humanity from extinction. Sounds easy, right? Well, Earth is now inhabited by creatures, robots, and mutants who don’t take kindly to you. Age himself has seven days left in his life and by completing this mission, he would be granted eternal life. Throughout the game, you are accompanied by Helvis, a little android, who assists you in several ways across different locales, such as jungles, abandoned facilities, and deserts. Your ultimate goal is simple: find the ‘key’ to saving humankind.

Ultra Age opens with the basic plot as described above explained to you through Helvis and Age. You are then thrown into the game with the movement basics and then some rudimentary combat explained with your sword and the starting blade. The entire game is fully voice acted and done well, especially in building the relationship between Age and Helvis, who have a very banter-filled back and forth between one another. In a nutshell, the gameplay of Ultra Age is akin to the Devil May Cry series. It is very much a hack and slash, combo heavy, action game that is stylistically impressive in the combat.

The combat is really where Ultra Age shines. On a whole, it is incredibly fluid, with almost no frame rate drops (well, none really noticeable), and it’s so gratifying when you land an insane combo or defeat a large number of enemies in one go. Your weapon of choice in this game is your sword, which has several blade attachments that you can switch between seamlessly at any time, even mid combo. Each blade has a different style and has added effects depending on whom you are facing. For example, the Claymore blade is effective against robots, whereas it is less effective on living creatures. These blades all have durability and when they are close to breaking you can initiate a “break blade attack,” which is a special combo that deals extra damage. In terms of obtaining and upgrading these blades as well as improving your equipment and Age’s stats, you use energy from crystals. Crystals are littered across this world and can be absorbed by Age, who will then turn them into blades based on their color. Crystals reset every 12 in-game hours, meaning you can only use them once during this time. I found that I never came close to running out of blades during my time, which was something I first thought I would be worried about.

Aside from the blade, the only other piece of equipment you have is the wire. This can be used to grab and pull enemies to you or to pull you to enemies, extending your combos further, making for some truly beautiful sword action. Ultra Age makes it very inviting to master the combat element due to its gorgeous but chaotic visuals when engaging with an enemy. 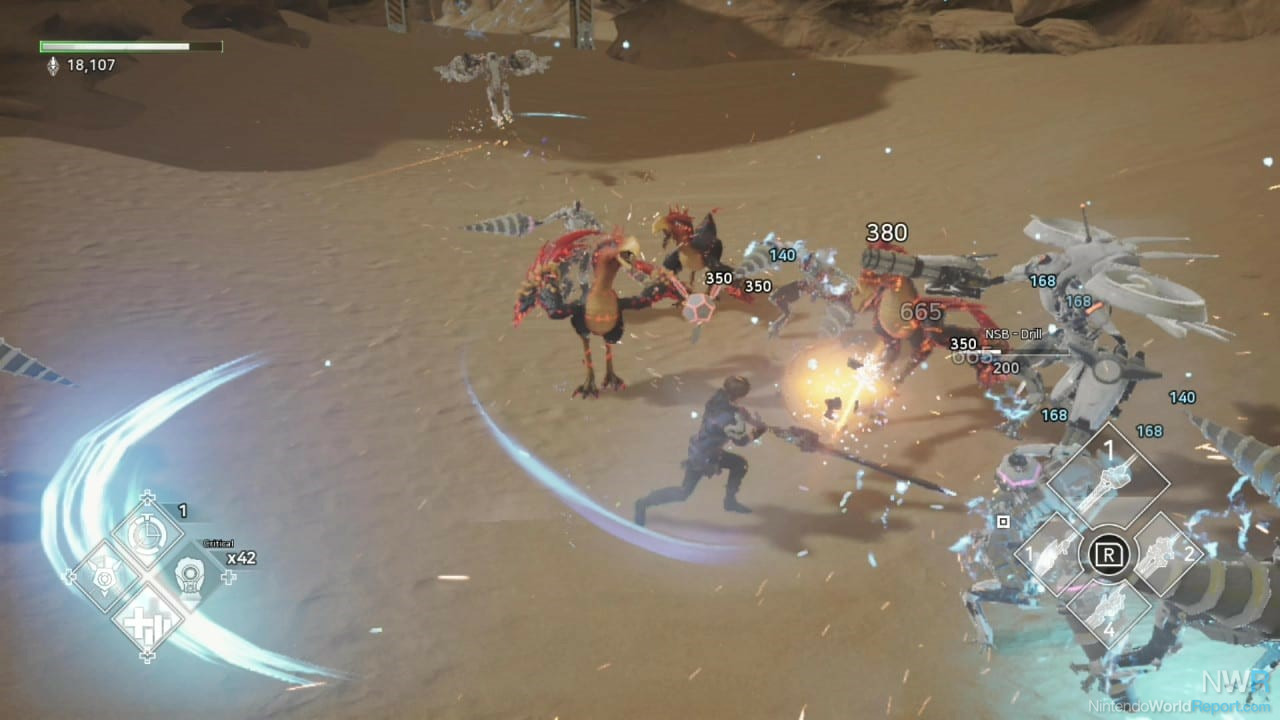 All aspects of your combat and other utilities such as the heal function from Helvis, can be upgraded at save points. These are your check points and hubs for spending the energy you have collected. Each blade has a skill tree, where you can enhance these further, and your other equipment and Helvis upgrades all have levels that require energy, too. The skill trees are simple enough, with each “branch” being a combo buff, or damage increase, among other things. These save points are also where you will end up each time you fall in combat. In some areas, there are large gaps between each save point, which can be frustrating to traverse back through certain hoards that can sometimes be overwhelming, but that’s part of the challenge, which is executed in an exciting way. No enemy ever felt undefeatable, and usually it was of my own fault or poor timing as to why I was defeated. Thankfully, there is usually a save point, and a ton of crystals just before you’re about to face a “boss level.”

Outside of combat, the worlds are well crafted and feature some stunning views. There is one moment when you are exploring an abandoned laboratory, where you are crossing a bridge and the roof has been partly destroyed. When running across the bridge, the camera angle shifts to give you a gorgeous view of the debris and jungle co-existing together alongside the burning sunset. There are many serene shots like this scattered among the hectic combat you partake in. 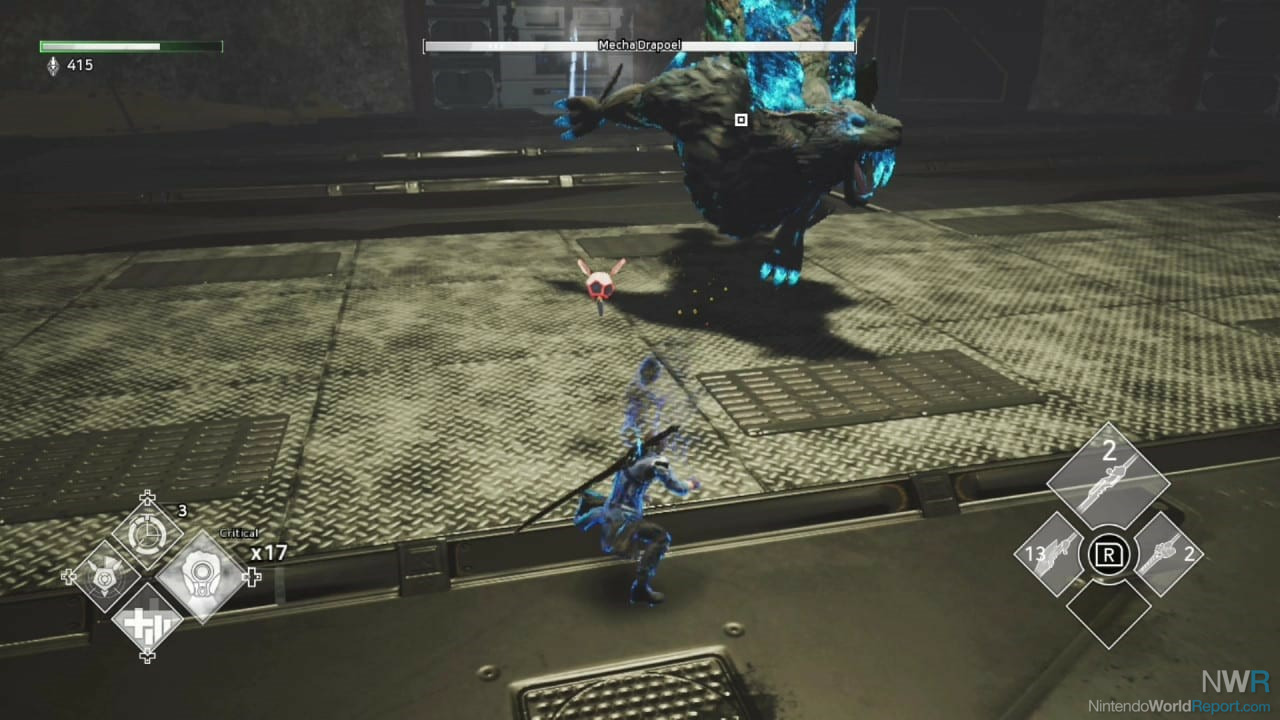 The music throughout Ultra Age is usually kept quite low-key, coming to the forefront when combat begins with a sudden klaxon ending after the final enemy is defeated. This is almost to let you know, “You’re all good… for now.” The only other time it usually becomes a focus is when an enemy has appeared and initiated dialogue. During these times, the loud adrenaline pumping rock music can be too loud, drowning the enemy’s dialogue out, but aside from this I am very happy with how music is used here. There is generally no music when exploring these worlds, which adds to the narrative of it being a now uninhabitable place, with footsteps and doors being the only sounds.

Given that the worlds, or levels, you encounter are large in scale and the number of enemies is also massive, the load times in Ultra Age are actually very quick throughout—sometimes almost non-existent. This is very impressive and only adds value to the experience in my opinion. There is nothing worse than finally defeating an enemy in a high-octane fight, only for you to then sit staring at a load screen waiting for the following cutscene. The cutscenes also use the gameplay of the game, so they tend to transition seamlessly in and out of each other, which again, helps with the flow that’s so important to games in this genre.

I had a blast with Ultra Age and will continue to play this long after this review is written and posted. Even though its narrative is a little thin in its 15+ hour runtime, it truly is the stylish and adrenaline pumping combat that keeps you coming back for more and elevates Ultra Age to the tier of great Switch titles.