Japanese romance, especially from the crew at Idea Factory/Otomate, doesn’t step out of the box much (if at all) when it comes to romantic partners. They stick tightly to the heteronormative “woman gets the man” at the end of their stories. I was quite excited to get the latest Aksys localization, Variable Barricade, as a lot of the pre-release details were centered around how the heroine was trying to avoid love. It turns out they had a list of reasons for avoiding it longer than an episode of Radio Free Nintendo, but the final ending still left me more creeped out than happy.

Unlike most romance games, only the heroine’s first name (default: Hibari) can be changed – the last name will always be Tojo. That’s because if you took a drink every time they’re called the “Tojo Heir,” you’d be dead about halfway through the common route. Hibari is the sole living descendant of the Tojo Group, a large Japanese conglomerate in various unspecified businesses, and is essentially attending a finishing school (all girls; she’s 17) so she can take over the business. After classes one day, four men burst onto the campus and propose marriage to Hibari, and after the inevitable howls of protest she is returned to the Tojo estate where her grandfather (the parents being written out by an accident) advises her that she has to get engaged to one of the four school interlopers in order to fully take over the business. Each one has a red flag the size of Kyoto, whether it’s marriage fraud (alleged), a gambling addiction, or the lovely description of “walking debt generator.” Hijinks ensue as Hibari and her obsessive butler try to fend off the advances of the suitors and the machinations of the grandfather, but in the end the choices come down to which of the four is the least bad, with a “true end” after getting the love endings for the four suitors to pay everything off.

Variable Barricade unfolds with a great illusion of choice, even if the whole story will play out eventually. (Sounds familiar.) Each route of the game plays out on a flow chart of various sizes, starting with the common route which includes the “Level 1” chart for each suitor. Once the common route is filled in, the suitor of choice for the rest of that run is chosen and plays out over two additional charts. The romance level plays out as building either “Romance” (for the suitor) or “Reason” (for the heroine), with a cutscene showing the suitor attacking a literal barricade with a weapon: if they knock the barricade down on their routes twice, you get the best ending. It’s an interesting structure, even if the cutscene got a little repetitive after viewing it for the 20th time. Getting the love end for all four suitors unlocks the no-choices-necessary true ending, though to access that you do have to view all but one event on the common route (the suitor choice one) which makes me glad for an easy skip button. Among the items unlockable in the game are a series of vignettes with the suitors, CGs, and the music; playing through the love ends will unlock all but the bad endings. 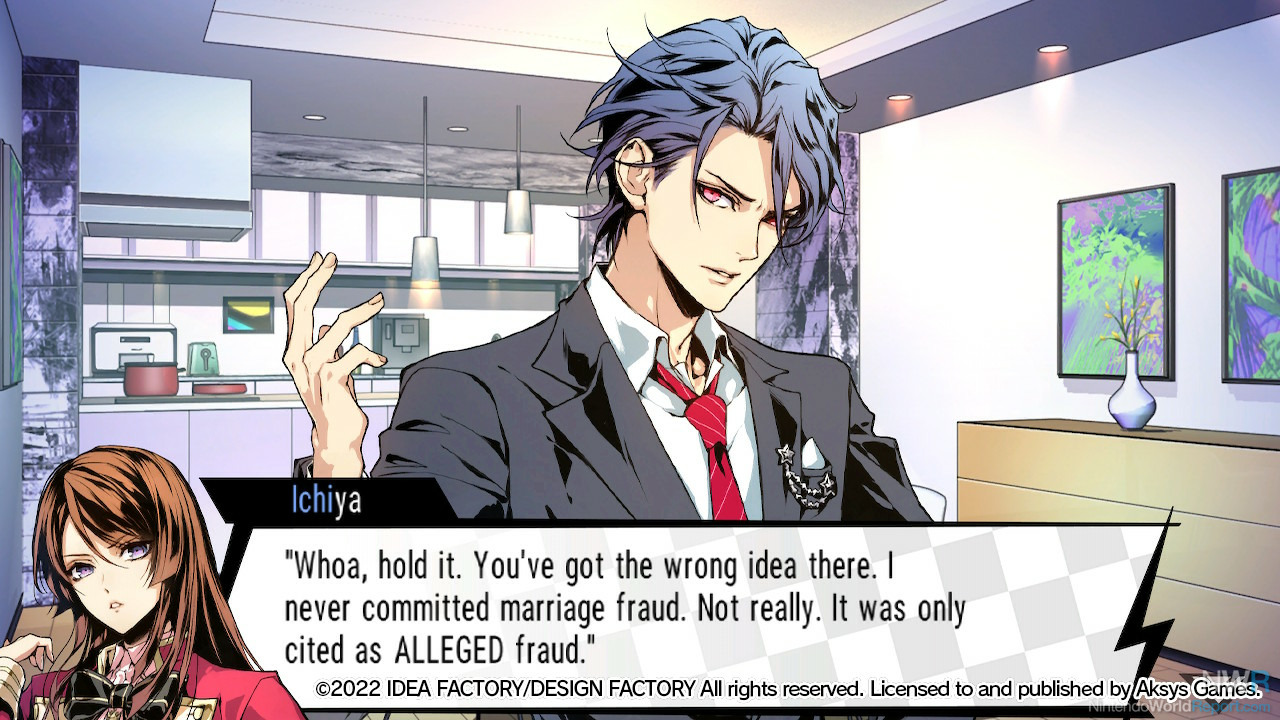 And the Nobel Prize for alleged chemistry goes to…

There are a few elements of the story in Variable Barricade that didn’t land well with me. Forced marriage for business’s sake is sketchy enough, but all of the suitors are older than the heroine and some uncomfortably so (in order of how I played their routes they’re 26, 23, 20, and 20 with the maturity of a ten year old for 90% of the route). There’s no overt sexuality beyond kissing, but a few other uncomfortable moments such as a male getting essentially drugged and nearly date-raped came up in the story. The brief vignettes mentioned earlier are actually recorded by a spy dog, which would be far more frightening if it wasn’t initiated by the heroine. And there was a bit of eye-rolling when one route flagrantly ripped off a popular Hollywood romance flick, even if the game hung a pretty large lampshade on it. Finally, the true ending is one giant stream of uncomfortable moments given the nature of the storyline and bringing two extra suitors into play including a twin (of the oldest existing suitor, no less) and being able to pick out the term “siscon” often in the audio track. My ability to translate spoken Japanese is barely existent, and I still recognized that term.

Although there weren’t any major spelling errors, there were a few too many cases of “missing words” for my liking in the text. There’s also a couple of text inconsistencies that crop up often: when a character’s speech covered multiple text boxes the first quotation mark would be left out. I’m also not sure why the sign for the school switches from English to Japanese and back, sometimes in consecutive segments. The background reuse isn’t too egregious, since most of the game is set in a specific home anyway and there’s enough variety in the other environments. The leitmotifs for the characters are all enjoyable tunes that fit their personalities well.

Maybe it’s the fact that I’ve now reviewed eleven games from the same developer in the last two years, but I’d really like to see them take some more risks with the endings in these romance games. Variable Barricade seemed like it would be the time, but the ending did leave me feeling a bit baited. But I accept that I’m part of a very small minority compared to the rest of the audience, and if you’re looking for romantic hijinx with a side of gritted teeth then climb over the barricade.