Zombie Army 4: Dead War is the fourth installment in the Zombie Army series, which is a spin off of the Sniper Elite Series. Sounds like a lot right? Thankfully, you don’t need to know all of the back story of the three earlier games or anything from Sniper Elite to jump into it because Dead War brings you up to speed with a wrap up video at the beginning that is a mixture of found footage and clips from the previous games. The story takes place in an alternate history where when Germany was losing World War II, Hitler resurrected the dead in order to level the playing field. After Hitler was killed off in the first trilogy, the Nazi Zombie Army continued to lay waste to the world with no expected end. That’s where you come in! The main mission of the game is to find the source of these Zombies and close it up.

Zombie Army 4 is a third-person survival horror/action game where you destroy hordes of zombies in order to go from Point A to Point B. There are eight different characters to choose from, and each has their own strengths and weaknesses; for instance, June is fast yet has weak melee attacks, and Karl has increased critical hit chance but slower health regeneration. The game is playable online with up to four players or local as well if you have four switches and four copies of the game. Unfortunately, there weren’t any multiplayer lobbies available at the time of review, but hopefully there will be a decent player base after launch.

Thankfully, the solo mode is just as fun as the multiplayer would be. The basic layout of every level is fairly simple: you start in a safe zone where you make the necessary preparations (collecting ammo, med-packs, grenades, etc.). Once you leave the safe zone, you fight your way through hordes of zombies and get to the next safe zone. There are three weapon types in the game: sniper, secondary, and pistol. You alternate through these on the fly and try to balance out the amount of ammo you have in order to survive to the next area. There are upgrades you can get either through acquiring an item in the level, leveling up, or doing specific things with that weapon, like getting a specific number of headshots. There is an arcade feel to the experience, where one main mechanic is getting combos and scoring multipliers depending on how many zombies you can shoot in a row. The number of points you gain translates to experience points that award level-ups and the ability to customize your character.

In terms of performance, the game runs really well on the Nintendo Switch. There aren’t any noticeable frame problems in docked or handheld mode. This is good since the Zombie Army 4 is so fast paced; when you die you only have yourself to blame. The game has great gyro aiming that can help you tilt to get that satisfying head shot, too! It has a good pick-up-and-play feeling, which works great for on-the-go gaming. 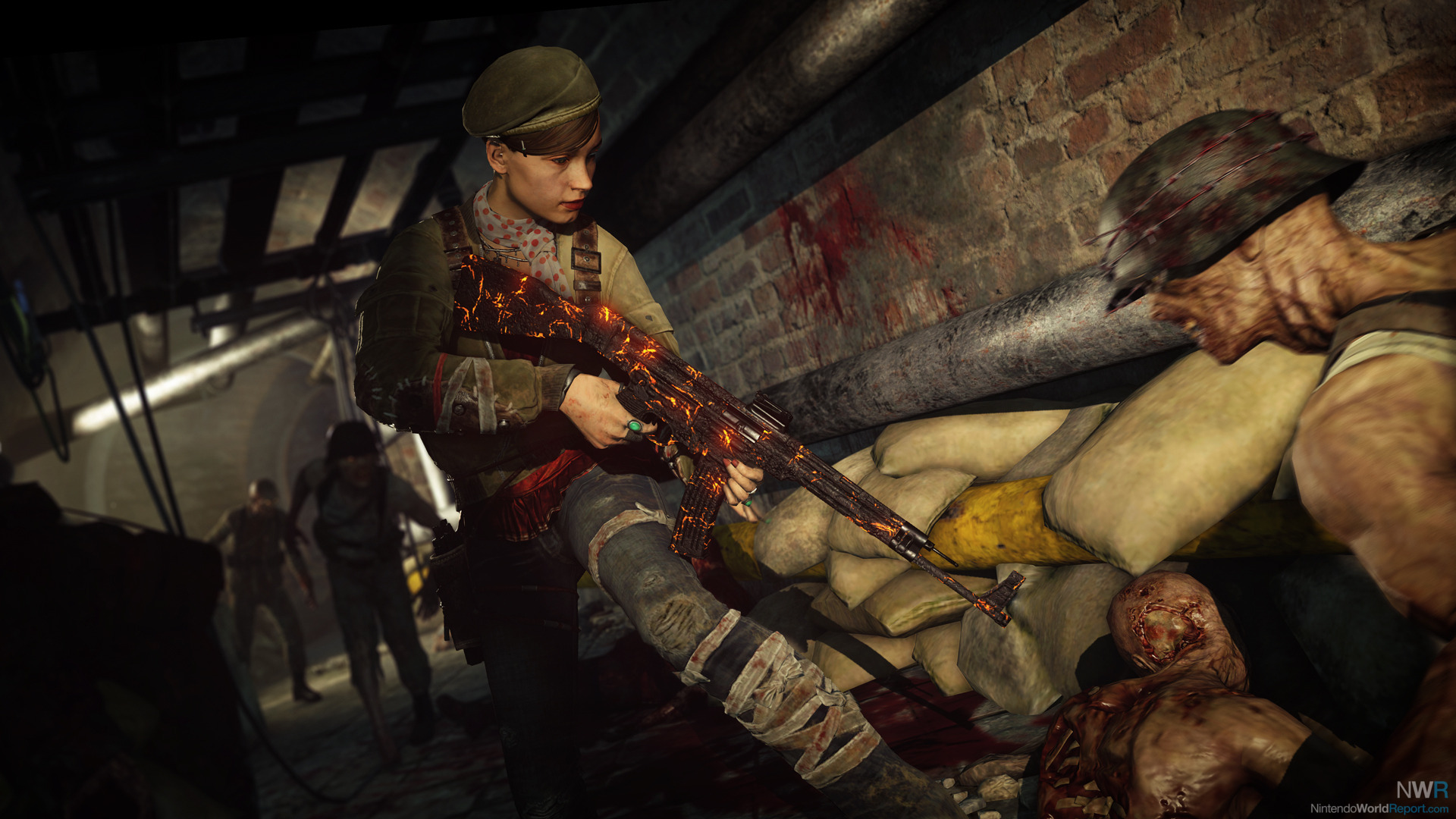 Each level has four parts to it with a boss style event at the end. The inter chapters of the levels could be completed in 15-30 minutes. There are generous checkpoints as well. While the premise may seem simple, Zombie Army 4 does a great job of keeping things from getting stale through level variety and a wide range of zombie types. The levels are enjoyable and unique; you go to an abandoned zoo infested with zombies, fight on a boat through a canal, and battle at an abandoned train station. Each level has a cool grindhouse style movie poster with a credit block at the bottom and a recognizable font.

Just like the zombies ooze with blood after a well-placed headshot, the game itself oozes with style. The way the levels are designed and the amount of gore used in each and every zombie death show how the developers are leaning into the horror genre. The soundtrack is great as well, with eerie synthesizer beats that make you feel like you are in a classic ‘80s movie, even though it takes place in the ‘40s. There’s a decided fear factor to the experience, too. There is a level where all the lights are out and you have only the flashlight attached to your gun to see with. As you move through this warehouse in the dark searching for fuses to get the power back on, these xenomorph-looking zombies called creepers attack you from the ground and crawl in through the vents. Before you know it, you will be grasping the controller with white knuckles trying to survive enough to make it to the next safe zone. 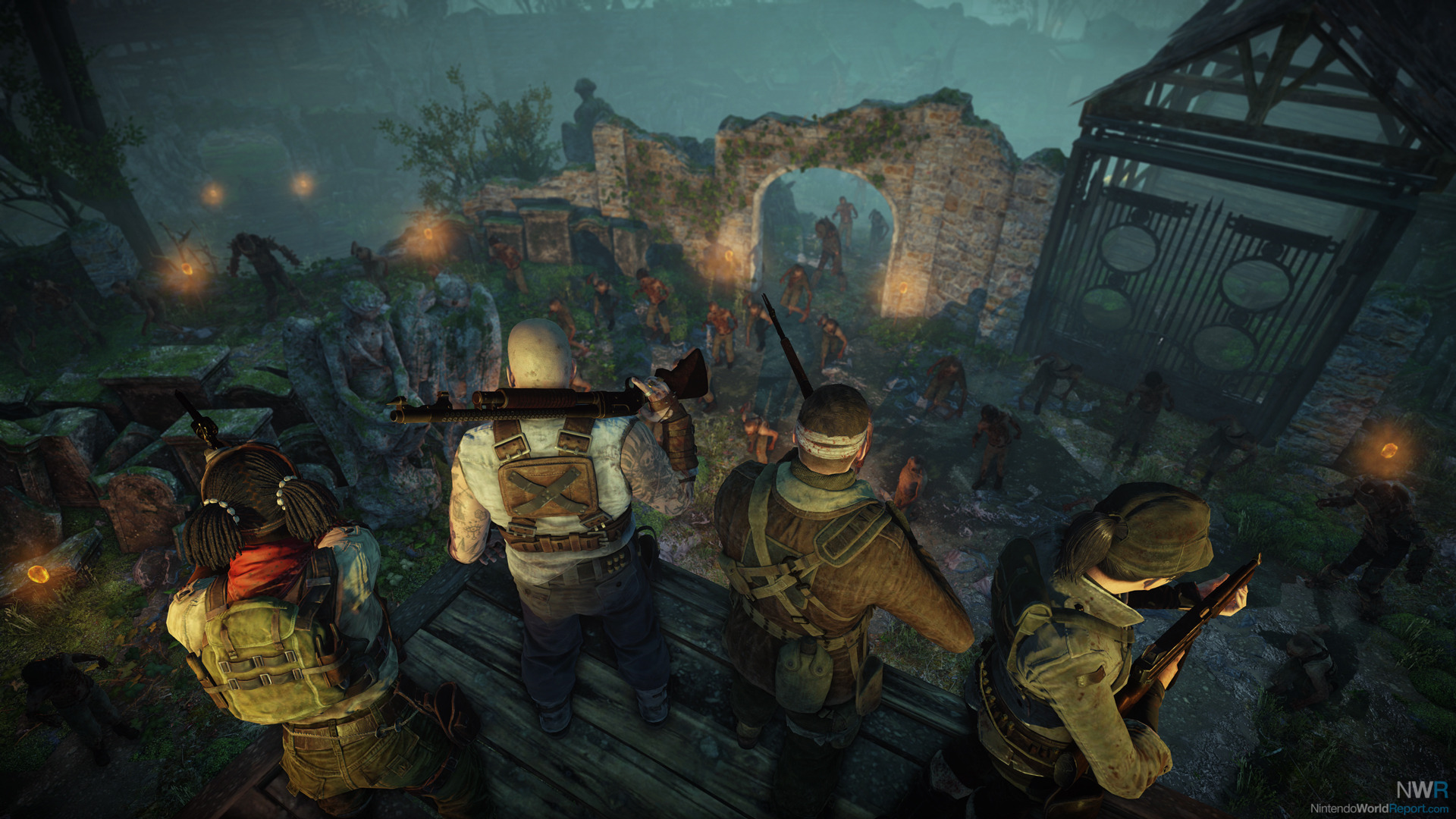 This is a Switch port of the original PC game, which came out two years ago. It could be easy to balk at the value proposition here for a two-year-old game, but fortunately this version comes with all the DLC from the first season. Hopefully there will be access to the already released season 2 and 3 after the official launch date. As of right now there are new weapons and characters shown as DLC but are not accessible. If you have already bought the game on Steam, you can import your save to the Nintendo Switch. Unfortunately, there is no cross play. The regular campaign will run you about 10-12 hours; plus there are an additional three missions of DLC you get to play after you beat the main campaign. Not to mention the horde mode, which is an endless onslaught of enemies where you just mow down wave after wave of zombies to gain a high score and challenge your friends in multiplayer. There are a multitude of different maps to play in this mode, from snowy mountains to hell itself.

Playing Zombie Army 4 was a really great experience. The campaign stayed fresh from beginning to end with a fantastic climax. The additional levels from the included DLC are just as gripping as well. It’s a great game that you can play solo or with friends, and it does a great job combining horror and action. If the online ends up working as well as the offline does when the game releases, you will lose loads of hours in this world. With all of the customization that you can do for multiple characters, weapons, and abilities with much more paid DLC to come, it’s easy to imagine sinking tons of hours and bullets into this never-ending zombie war.